If you've been reading the site recently, you know that I've been obsessed for the past 2-3 weeks with nothing but the 2018 Medical Loss Ratio rebate payments.

Now that I've completed posting my analyses of all 50 states (+DC), I'm wrapping it up with a table summarizing the the totals for the entire country, how it compares with the Kaiser Family Foundation's similar report posted a few days ago, and some additional thoughts and observations which have come to mind in doing this project.

First of all, as noted, the Kaiser Family Foundation published their own report analyzinng the 2018 MLR rebates when I was about halfway done posting my own state-by-state analyses. They made sure to give me a nice shout-out, anyway:

We at KFF put out an analysis today of how much insurers will be paying in rebates to consumers and employers later this month. @charles_gaba also has very good information on this, and we all benefit from his tireless tracking. https://t.co/uPX2SPklcY

Kaiser includes a handy bar graph breaking out the Individual, Small Group and Large Group market rebates by year. For 2018 they have the grand total for all three markets add up to $1.278 billion...nearly 20% higher than the previous all-time highest rebate year in 2012 (which was also the first year the MLR rule was in effect).

I actually get a grand total of $1.37 billion...around $93 million higher than Kaiser. A big chunk of this is because Kaiser chose to leave out four states: Kansas, Montana, Nevada and North Dakota, because these four states are apparently missing at least 10% of their enrollment data...whereas I've included all four of them:

At least 12 insurers did not file rebate data as of August 10. We suppress rebates in Kansas, Montana, Nevada, and North Dakota because insurers that make up more than 10% of enrollment in those states did not file MLR data.

I don't know if the missing carriers are included in my data (I started my projects a few weeks later than Kaiser did), but between this, Kaiser's rounding dollar amounts off to the nearest $100,000 and other reasons, there's some discrepancies between their numbers and mine:

Kaiser lists the number of policyholders or subscribers, whereas I list the total number of covered lives, so there's no way to compare those differences.

When you remove the 4 states in question, the Individual market totals are virtually identical. The large group market is off by about $3.5 million or 1.2%. It's the small group market where there's still a major discrepancy (over $53 million, or about 17%)...I'm not sure what accounts for that.

It's pretty remarkable how close Kaiser came last spring to the actual totals this year:

How about my own very crude, very spitball estimate of the potential rebates for next year? Well, here's what I said in early August:

I also learned some interesting tidbits along the way, including:

New York's 82% didn't make much difference this year, but in Massachusetts, all $47.3 million of the indy/sm. group rebates being paid out this year are thanks specifically to that 88% level (that is, all of the carriers making payments in those markets fell between 80-88%).

I guess the idea here is that a carrier which only sells Bronze plans with sky-high deductibles is naturally going to have a much lower claims-to-premium ratio, since a big chunk of the medical claims are instead paid by the enrollee as part of their deductible instead.

Kaiser also taught me a few other things:

In other words, expatriate plans have an effective MLR threshold of just 40%.

Not really an issue anymore, since mini-meds have been pretty much phased out by the ACA's no-annual caps provision.

In other words, carriers like Oscar and Bright Health, which are expanding into several new states in 2020, won't have their MLR data included in the formula until 2021.

The rules for university/student plans when it comes to MLR is more obscure. Kaiser doesn't mention them at all, but here's what CMS has to say about it:

To address the special circumstances of Student Health Plans, HHS will apply a methodological adjustment to the way the medical loss ratio is calculated for those plans. Similar to mini-med and expatriate plans, the adjustment will address the unusual expense and premium structures of student health plans. These changes to the methodology for reporting and rebates apply only in calendar year 2013, after which time no adjustment is provided.

In addition, we added to the MLR rule a provision that requires student coverage to be aggregated nationally as its own pool rather than on a State by State basis, and to report experience separate from other policies.

This makes it sound like student plans are subject to the same 80% threshold today, but they're reported as a single MLR percentage nationally by the carrier instead of state-by-state. I have no idea how many students are enrolled in plans which are eligible for MLR rebates...I presume the rebate is paid to the university, and then listed as a line-item adjustment in the student's tuition or board billing?

For instance, while I joked about "The United States Life Insurance Company in the City of New York" paying out a whopping $1.46 apiece to 60,000 enrollees, it turns out nope, they don't have to pay out any of this:

Whoops...looks like I misunderstood how the de minimis rule works:

One clarifying piece: the de minimis threshold doesn’t mean they don’t pay it, just that they spread the total of the de minimis rebates over the rest of the population who are receiving rebates.

Unfortunately, guess what types of policies aren't subject to the MLR rebate provision? That's right: so-called "short-term, limited duration" plans, aka #ShortAssPlans, aka the exact types of junk policies which the Trump Administration has been pushing hard to expand.

By the way, in case anyone wonders whether the rebate checks are actually going out to people: Yes, they are. Here's a couple of responses I got from Texas residents: 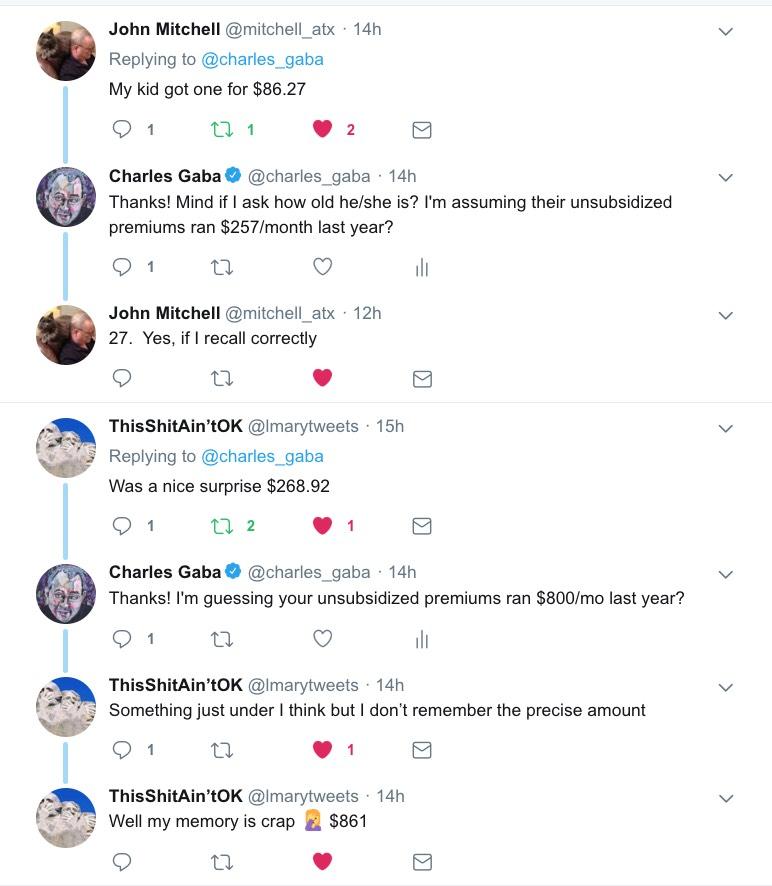 ...and here's one from Minnesota:

There's a bunch of other wonky stuff as well, but this post is getting pretty long already, and I'm getting a bit sick of writing about it, to be honest, so without further ado, here's the table aggregating all fifty states (+DC) and all three markets into a single table. I've also included a column listing my crude projection for potential 2019 MLR rebates on the right side.

Note: Kansas' $25.5 million is highlighted in red because I'm not certain about whether it's legit or not. 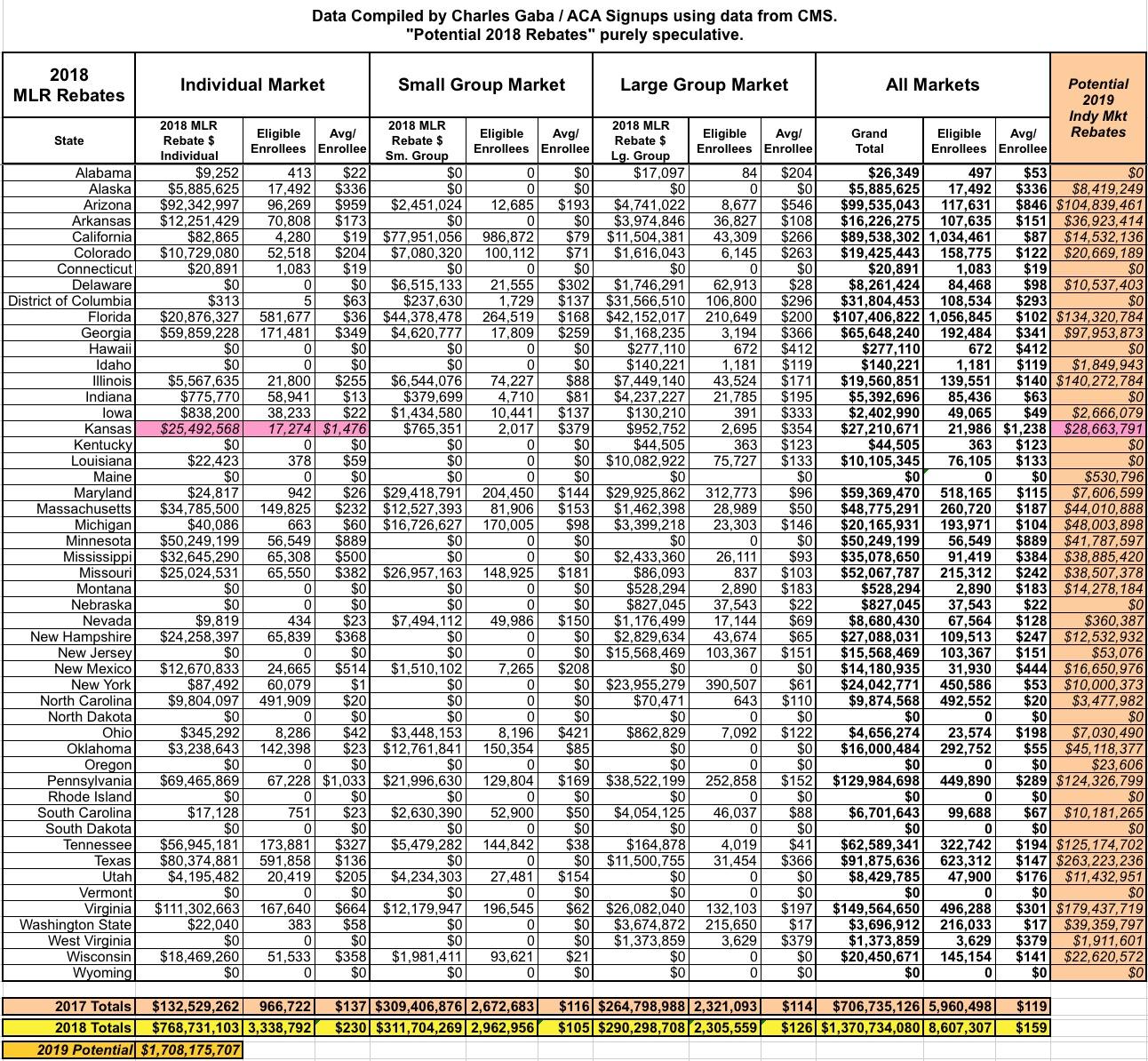