Yesterday, the Centers for Medicare & Medicaid released several important data-heavy reports, featuring a lot of month-by-month, state-by-state and year-by-year ACA enrollment data. There's a lot of data to dig into, so I'm breaking this into several posts.

First up: Average monthly effectuated enrollments. It's important to understand the difference between someone selecting a Qualified Health Plan (QHP) from one of the ACA exchanges during the Open Enrollment Period and someone actually being enrolled in an effectuated policy...that is, just because you sign your family up for a policy on HealthCare.Gov (or a state-based exchange), you aren't considered effectuated until you actually pay for the policy.

In addition, some people only pay for a few months before dropping their exchange coverage. There are any number of legitimate reasons for this--some turn 65 and move to Medicare. Some fall on hard times and transfer over to Medicaid. Some get a job with benefits. Some might get married and move onto their spouse's employer coverage. Some...die (hey, it happens).

There's also some instances of people who, unfortunately, might drop their coverage because they're gaming the system (signing up in order to have a particular expensive surgical/medical procedure performed and then dropping their policy as soon as they're in the clear). One of the provisions of the ACA which was put in to help prevent this sort of gaming was the individual mandate penalty...except that's been zeroed out by Congressional Republicans and Donald Trump as of the beginning of 2019, so we'll have to see what happens there.

At the same time, there are some people who enroll during the off-season via Special Enrollment Periods (SEPs) for similar reasons to the ones I listed earlier: Having a baby, getting married/divorced, moving to a new town/state, turning 26 (thus being kicked off your parents' employer plan), having an income boost which disqualifies you for Medicaid, losing a job with benefits and so on.

However, the number of people dropping coverage throughout the course of the year has always paced ahead of the number adding coverage, so after an initial bump in the first few months there's always a slow, steady net drop-off throughout the rest of the year. Remember, none of the data/analysis below includes OFF-exchange individual market enrollments, which are a whole different discussion. Everything here is for ON-exchange enrollees only.

The gap between the number of QHP selections and the number actually enrolled in effectuated policies was particularly wide in 2014, the first year of Open Enrollment. Aside from the massive technical problems most of the exchanges faced when they first launched, the enrollment period itself was six months long (actually more like six and a half with the "overtime" period tacked onto the end). As a result, it stretched well into March and early April 2014.

Combine that with the massive surge at the tail end of that time period and the number of people actually enrolled in effectuated policies never reached more than 6.9 million at its peak in August, even though just over 8.0 million selected QHPs by mid-April. The late deadline also meant that the average monthly effectuated enrollment for the full year was only around 5.5 million people, or just 68% of the QHP total.

Things were far smoother for 2015, 2016 & 2017. The technical problems were pretty much fixed, the Open Enrollment Period was cut in half to just 3 months, the novelty and confusion over the ACA exchange/enrollment period system wore off as people became more familiar with how it all worked, and effectuated enrollments jumped to as high as 10.2 million in March 2015; 10.8 million in March 2016; and 10.5 million in March 2017.

Average monthly effectuations hit 9.3 million, 10.0 million and 9.8 million for the year respectively...hovering right around 80% of the QHP selection totals for each year.

In 2018, in addition to all of the other changes made (sabotage done) to the ACA exchange system, the Trump Administration also made one other big change: They cut the Open Enrollment Period in half again, to just seven weeks. About a half-dozen states stuck with longer OEPs, but HealthCare.Gov was only available to the general public from Nov. 1st to Dec. 15th, shortening the window people had to sign up.

What about 2019? Well, obviously we're still missing most of the data for this year. The only hard national numbers released by CMS are the OEP QHP total (11.44 million...down another 306,000 people) and the February effectuation total...which is slightly higher than in February 2018 (11.58 million vs. 11.52 million). My best guess is that a few more states shortened their OEP deadline for 2019, including Washington State.

In any event, we'll have to wait and see how the rest of the year shapes up, but for now I'll assume that the monthly effectuation totals will remain almost unchanged from 2018. If so, we should end the year averaging right around 9.9 million effectuated enrollees on exchange plans again, which would increase the QHP ratio further still to roughly 87%.

Here's what all six years (well, five years plus a sliver of 2019) look like visually. It's getting pretty crowded at the top, so this is likely the last year I'll be able to compile the multi-year graph in this fashion (click image for high-res version): 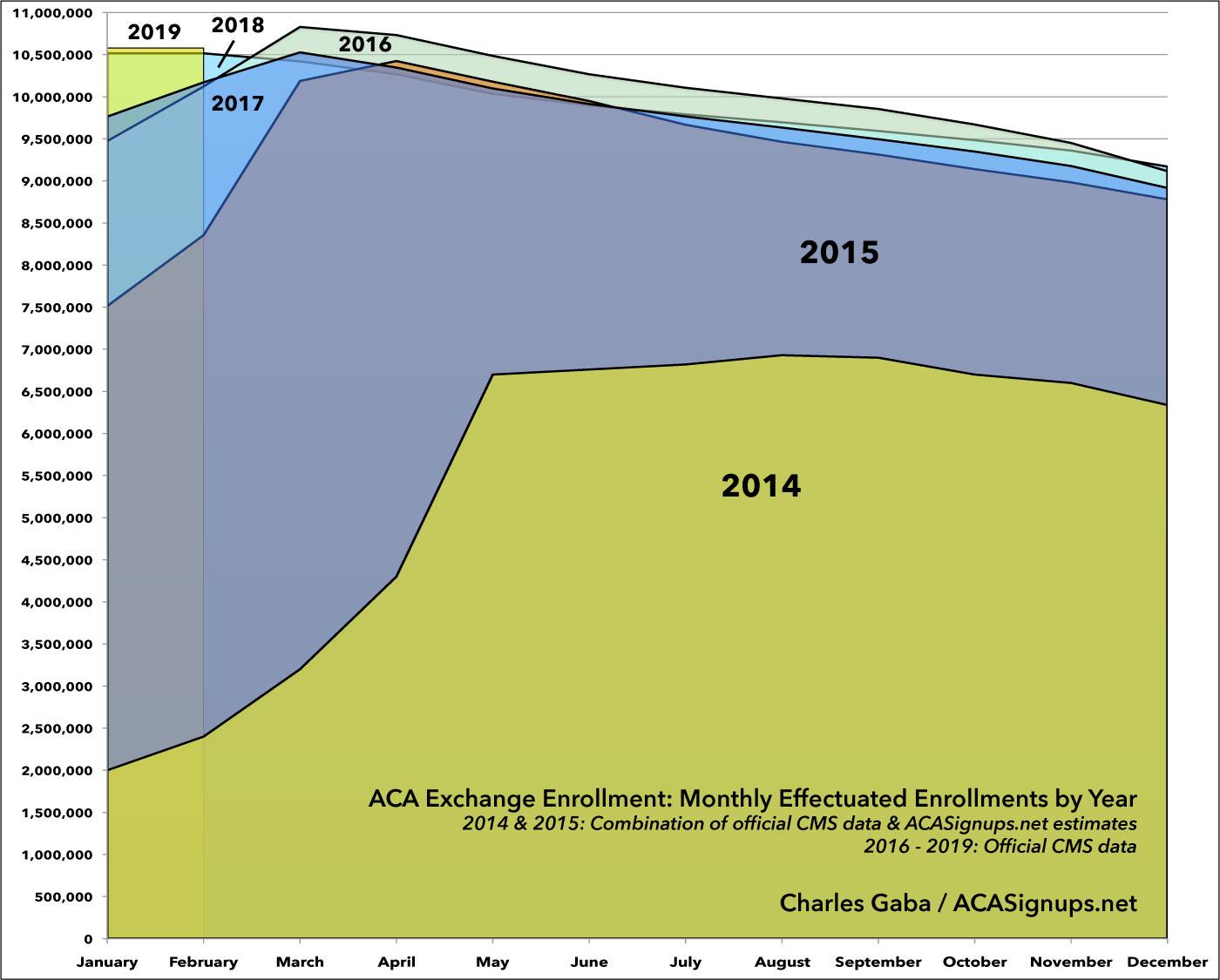