For weeks now, my blog posts have been overwhelmed by my state-by-state analysis of the preliminary 2020 ACA individual market rate filings. With the addition yesterday of Illinois, Hawaii, Iowa, Kansas and especially Florida, I've now accounted for over 75% of the total ACA Individual Market nationally.

I still have a dozen states to go, including large ones like Texas and Georgia, but barring some devastatingly huge rate hikes, the picture is clear: Average unsubsidized 2020 ACA individual market premiums will only be going up an average of less than 1% nationally.

This morning, David Anderson reminded us that, all else being equal, 2020 premiums "should" increase by around 7% on average: 5% for normal "medical trend" (increased cost of medical expenses/claims), plus around 2% to account for the return of the ACA's Carrier Tax (which goes to help pay for the cost of the ACA's subsidies & Medicaid expansion).

Since most Indy Market carriers are turning a decent profit these days, that means, as a general rule, any rate increase short of 7% should indicate that the carrier has fallen below the ACA's 80% Medical Loss Ratio (MLR) rule, and will therefore have to pay a chunk of the premiums back to their enrollees. This isn't true in every case, but it's a pretty good guideline.

Let's go back and review how Medical Loss Ratios work: 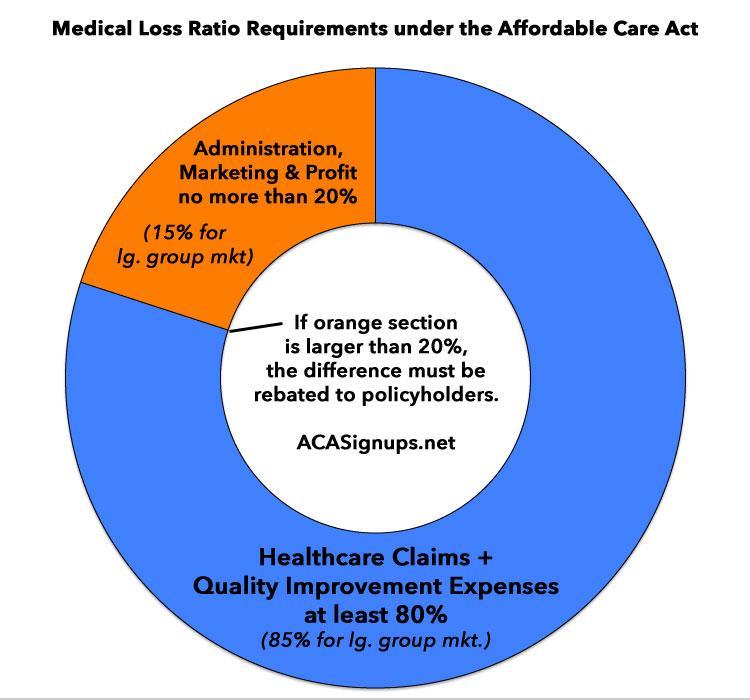 Their MLR was way too high the first two years...in fact, they lost money in 2014 and probably in 2015 as well, since administrative overhead/etc. costs more than 5%. Things started to stabilize in 2016, and in 2017 they actually overshot the mark slightly. In 2018 they seriously overpriced, so they instituted a price freeze in 2019 to try and comply with the ACA's 80% MLR rule.

To give you an idea about how much money we're talking about, here's how much was paid out in MLR rebates to Individual market enrollees over the years:

IMPORTANT UPDATE: The list and tables below originally had the total amounts for the individual, small group and large group markets! They've been corrected to include only the Individual market, since that's the relevant one here! My apologies for the error!

The payments for 2018 (which are sent out in 2019) should be announced within the next month. I expect them to be pretty large.

Here's what the above data looks like in table form:

(Note: Kaiser doesn't have the total number receiving rebates or the average enrollee for 2011, but this 2012 article says it was around $160 per household, which suggests perhaps $110 per enrollee for a total of around 3.6 million enrollees. The total individual market as of 2011 was roughly 11 million people, give or take).

The official average unsubsidized premium for ACA individual market policies in 2019 is around $600/month per enrollee, although that usually ends up being a bit lower in practice since the official average assumes that 100% of enrollees stick with the exact same policy they're currently enrolled in. In practice, millions of people shop around each year (as they should) for better deals, lowering the effective average premium a bit.

If you're wondering how hundreds of millions could be paid out in previous years even with MLRs over 80%, remember that this is the national average. Every year, some carriers fell below 80%, even in 2015 when the national average was a whopping 103%.

In 2017, over $132 million was paid out even though the 3-year rolling average was 93.7% nationally. In 2018, the 3-year average dropped by a whopping 10 percentage points, which almost certainly means a huge increase in MLR payments going out this year.

UPDATE: As it happens, the Kaiser Family Foundation ran their own analysis back in May which projects that this year around $800 million in rebates will be paid out to Individual market enrollees, plus another $600 million in the Small & Large Group markets combined, for a total of $1.4 billion:

There's no way of knowing how many Individual market enrollees will actually receive payments or what the average will be...based on prior years, it could be as few as 900,000 ($888 apiece) or as many as 3.6 million ($222 apiece).

Seven points. Which happens to be almost exactly the difference between Anderson's 7% rule of thumb and the 0.5% national average rate increases expected so far.

Based on the Kaiser Family Foundation's data, it looks like the actual average being paid in 2019 will end up being more like $575/month. That's $6,900/year. Assuming an average of around 13.5 million effectuated enrollees in the ACA market per month, that's a total of roughly $93.2 billion in premiums.

Here's a visual of what that would look like: 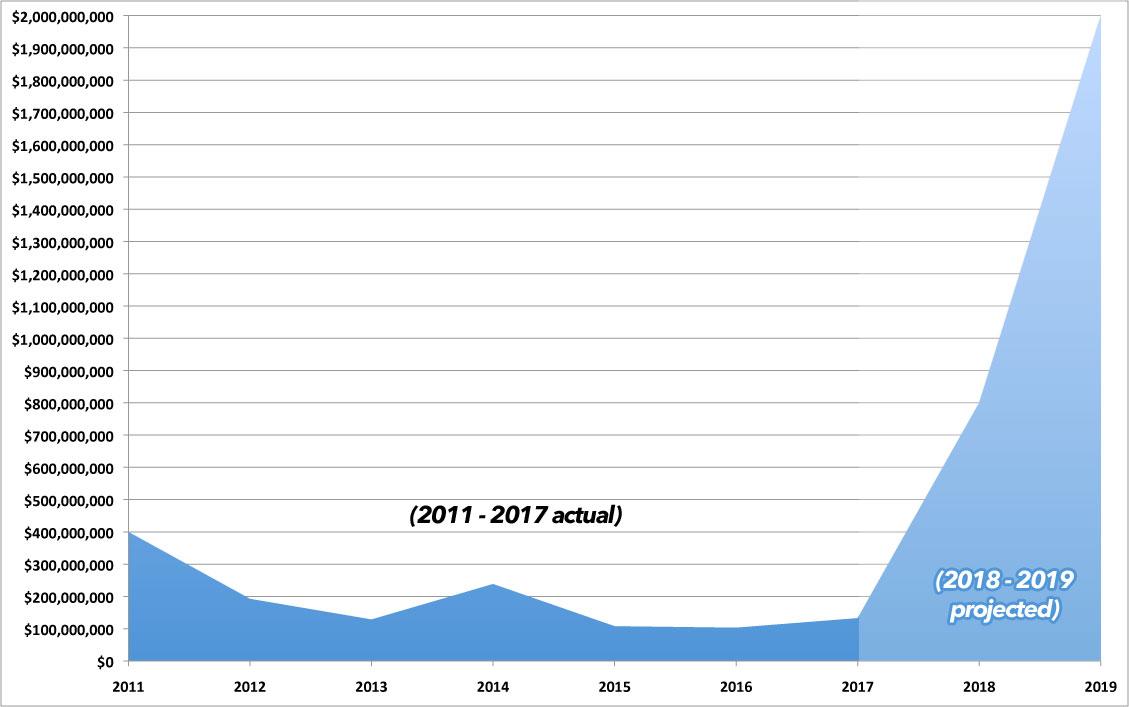 In theory, if you were to divide that by all 13.5 million enrollees, it would average $148 apiece, which would only be 8% higher than the 2018 payout. However, as you can see from past years, not all 13.5 million will receive rebate checks, and there's no way of knowing exactly what the total payout will end up being. The highest number of total recipients appears to have been around 3.6 million back in 2011, which would translate into over $555 apiece. The lowest number was 904,000 in 2016, which would mean a whopping $2,200 apiece. 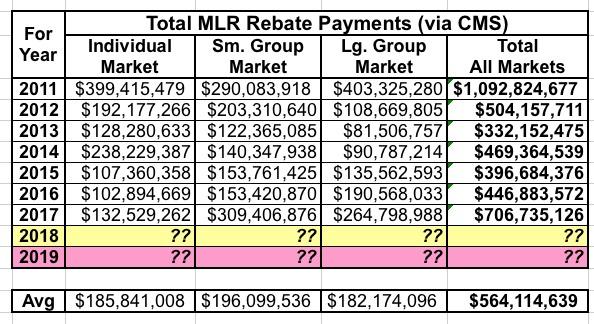 Here's the annual total payouts for all three markets (individual, small group and large group) from 2011 - 2017. The small group market is around the same size as the individual market and also is only required to hit 80% MLR threshold. The large group market, however, is a good 10x the size of either the Indy or small group markets, and is required to hit an 85% thresold. I don't follow either of these markets nearly as closely, so I don't know what the MLR situation is in either one this year; I'd imagine they'll be in the same ~$200 million range as they've averaged over the previous 7 years. It's the Indy rebates which are expected to be huge.

Note that the amounts will vary widely from carrier to carrier, and not every carrier will have to pay out rebates at all, while others could potentially be much higher.

Remember, the whole point of the program is to encourage carriers not to price gouge by keeping their premiums, and therefore their profit margins, within a limited range. I've been enrolled in an ACA exchange plan since 2014 and I've never received a rebate check yet, though I do know a few people who have. Having said that, I wouldn't be surprised to see MLR rebates averaging $250 or higher this year...and possibly $400 or higher next year. For some people it could hit up to $1,000 or more. Anything's possible.