BREAKING: Federal judge rules in favor of Trump re. the "Short" part of #ShortAssPlans

Back in March, I noted that a federal judge had shot down the Trump Administration's attempt to expand so-called "Association Health Plans", which are quasi-ACA compliant but which also have a long, ugly history of fraud and other abuses:

There is a long history of shady and inept operators of association health plans and related multiple employer welfare arrangements, with dozens of civil and criminal enforcement actions at the state and federal levels. The U.S. Government Accountability Office identified 144 "unauthorized or bogus" plans from 2000 to 2002, covering at least 15,000 employers and more than 200,000 policyholders, leaving $252 million in unpaid medical claims. Some were run as pyramid schemes, while others charged too little for premiums and became insolvent.

...Powerful words from DC District Court Judge John Bates in holding a Trump DOL rule unlawful: "The Final Rule was intended and designed to end run the requirements of the ACA, but it does so only by ignoring the language and purpose of both ERISA and the ACA."

"Association Health Plans" compose the "Ass" part of my #ShortAssPlans hashtag, and I was very glad to see this Trump sabotage nipped in the bud.

Unfortunately, you win some, you lose some. Breaking via Andrew Harris & John Tozzi of Bloomberg News:

The Trump administration can expand the sale of short-term health insurance policies that don’t meet the standards of the Affordable Care Act, a federal judge ruled, advancing the government’s efforts to undo Obamacare.

“Not only is any potential negative impact” from the rule “minimal, but its benefits are undeniable,” Leon wrote in a 40-page ruling. He said there’s no evidence the rule “is having or will have the type of impact -- substantial exodus from the individual market exchanges -- that would threaten the ACA’s structural core.”

(sigh) Believe me, no one is more unhappy about this ruling than me--I'm the one who coined the term #ShortAssPlans to describe the bevy of so-called "short-term, limited duration" and "association" health plans which are non-ACA compliant, medically underwritten, discriminatory, full of loopholes & fine print and often sold by unscrupulous companies, after all.

...The rule could create a longer-lasting alternative to ACA coverage that might lure healthier patients away from Obamacare, undermining the risk pools it depends on in offering its more comprehensive coverage, the plaintiffs argued. An attorney for the administration countered that there was a demand for policies cheaper than Affordable Care Act plans and that their availability hadn’t drawn people away from ACA coverage.

Here's where the problem with this lawsuit lies:

“No legislation pursues its purposes at all costs,” Leon wrote in rejecting the plaintiffs’ arguments. “To be sure, the ACA’s various reforms are interdependent and were designed to work together as features of the individual exchange markets. However, Congress clearly did not intend for the law to apply to all species of individual health insurance.”

The thing is, short-term plans should have been specifically banned (or at least restricted) under the ACA itself...but they weren't. The only way the ACA actively discouraged people from enrolling in them was by stating that they don't qualify as ACA-compliant coverage...which means that people who enroll in #ShortAssPlans still had to pay the ACA's individual mandate penalty.

Of course...there is no longer any financial penalty, because Congressional Republicans and Donald Trump zeroed it out.

Instead, a few years later, President Obama used an executive order to restrict short-term, limited-duration plans to actually being...short term (no more than 3 months at a time) and of limited duration (they can't be renewed within the same calendar year). Trump simply reversed Obama's executive order when he took office, thus allowing "short-term" plans to last up to a full year, and to be renewed.

...Those practices were typical of the individual insurance market in many states before the ACA came along. Obamacare was intended to end them but permitted short-term plans to remain on the market.

Here's the relevant part of the judicial ruling: 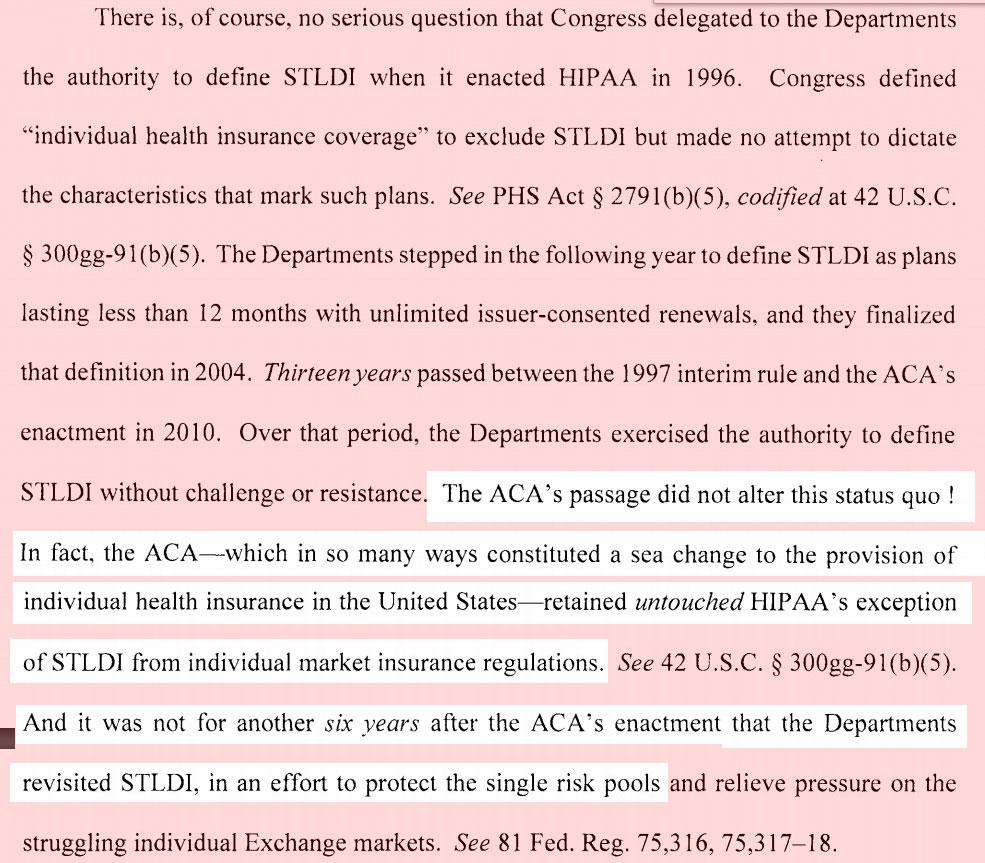 House Democrats actually passed a bill back in May which, if it were to become law, would make the lawsuit moot...

H.R. 1010, a bill to provide that the rule entitled “Short-Term, Limited Duration Insurance” shall have no force or effect, introduced by Rep. Kathy Castor (D-FL), would reverse the Trump Administration’s expansion of junk insurance plans, also known as short-term, limited-duration insurance plans.

...except, of course, that there's no way in hell that Republican Senate Majority Leader Mitch McConnell will allow it to even come up for a vote (much less let it pass), and even if it somehow did, obviously it'd be vetoed by Trump anyway.

The good news, such as it is, is that 23 states have either banned short-term plans outright, put the same restrictions on them that the Obama Administration did, or put other types of restrictions on them. This is hardly ideal, but it should at least partly mitigate the damage.

At the end of 2017, about 122,000 Americans were enrolled in short-term medical plans, according to data from the National Association of Insurance Commissioners. Trump’s policy could dramatically expand the market. Federal actuaries estimate that 600,000 more people might purchase short-term coverage in 2019 because of the rule.

The ACA-compliant individual market is currently somewhere around 13.5 million people, give or take, of which around 9 million are subsidized. This is down from a high point of perhaps 16 million at the outside in 2016. In terms of the impact on the ACA risk pool, the question is where those 600,000 additional people (if that's accurate) come from.

If they're people who already dropped off ACA plans and are currently going bare (or enrolled in some other type of non-ACA coverage like a "sharing ministry" or crappy "indemnity plans", then this shouldn't cause too much more damage done to the ACA market.

If, on the other hand, a significant number of them are siphoned off from those 13.5 million in ACA plans today, that will indeed have a negative impact on the risk pool. Either way, those who do enroll in #ShortAssPlans will be putting their finances and well-being at high risk, as Noam Levey reported for the L.A. Times back in April:

...After the Montana truck driver was diagnosed with testicular cancer in 2016, his insurer balked at paying tens of thousands of dollars in medical bills and then moved to cancel his coverage over a preexisting medical condition.

These practices were largely banned by the Affordable Care Act, or Obamacare, which set new national health insurance standards to protect consumers and bar discrimination based on preexisting conditions.

But as the Trump administration has pushed to relax many of these rules, skimpier short-term health plans like the one Butler bought are roaring back, threatening to subject consumers to many of the ordeals patients endured before the healthcare law.

“Unfortunately, companies are taking advantage of the fact that consumer protections required by the Affordable Care Act don’t apply to these plans,” ...

Nearly every company involved in Butler’s health plan has paid settlements to regulators in recent years...

...Butler, 36, said he had no inkling of his plan’s shortcomings when he was contacted in early 2016 by a representative from National Brokers of America Inc., a Pennsylvania company that sells short-term plans and has been sanctioned by insurance regulators in at least four states.

The broker — who unbeknownst to Butler had been convicted of assault and theft, according to Pennsylvania court records — assured Butler that the 11-month plan would protect him if he got sick. The monthly premium was just $146, far less than more comprehensive plans available on HealthCare.gov, the insurance marketplace created by the healthcare law.

...Misleading assurances are common, according to researchers who have found that marketing for short-term plans often obscures the limitations of the coverage.