An apology to the disability community. 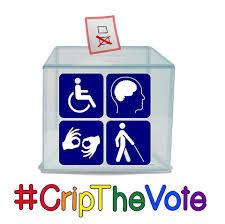 So, earlier today, as I've been hyping for several weeks now, I participated in a healthcare panel at Netroots Nation with five other healthcare activists: Laura Packard, Elena Hung, Matt Cortland, Dr. Sanjeev Sriram (aka "Dr. America") and German Parodi. It was even livestreamed via Facebook (you can watch the replay here, and you can download a full PDF version of the slideshow).

For the most part it went pretty well--we had a pretty full house and only went a bit over time, which is pretty impressive given that we were trying to cram about 10 hours' worth of wonky data about three different healthcare policies and a federal lawsuit into a single hour. The feedback I received from both those in attendance as well as comments on Twitter and Facebook from people who watched the livestream seemed extremely positive.

However, there was one incident which marred the event, and it was my fault.

When Matt, who is disabled, was introducing his segment on Medicare for America, he prefaced his segment by noting the lousy treatment and medical negligence that many disabled people face from "ableds" within the medical/healthcare community, and made mention of the hashtag "#DoctorsAreDickheads", which I had never heard of before. Dr. Sriram (himself a pediatrician), jokingly quipped "why is everyone looking at me?". In response, I kiddingly said "not all doctors?" to him.

This was out of line.

Matt shut me down immediately, making me quickly realize that it was inappropriate of me...but I didn't realize HOW inappropriate it was (especially given the topic and the aucidence) until awhile later, because, frankly, I'm a thoughtless jackass at times. The relevant portion runs from around 23:30 - 24:30 in the video.

I apologize to Matt specifically and to the disability community in general.

This is not a "non-apology apology." I said something thoughtless, offensive and hurtful in a venue where my entire goal was to be helpful. In short, I screwed up, I feel badly, I let people down and I promise to do better in the future.

For those wondering what the full story is behind the "#DoctorsAreDickheads" hashtag, here's an explainer I just discovered while writing this entry from a developmental and molecular biologist named Emily Casanova:

You may or may not be aware of the trending hashtag, #DoctorsAreDickheads, on Twitter. If you’re not knee-deep in the chronic illness community or aren’t much of a Twitter follower, you may be wondering what it’s all about and why did a bunch of patients start this feisty “harshtag”?

So here’s how it all started. @stevieboebi, a woman with a popular channel on YouTube, shared her video story about her recent diagnoses of Ehlers-Danlos Syndrome (EDS) and Postural Orthostatic Tachycardia Syndrome (POTS). It took many many years, a lot of physical suffering, and many many doctors for her to finally get the right diagnoses. (According to Stevie, one rheumatologist told her that all connective tissue disorders where autoimmune conditions. Errrrr, wrong!! ) Anyways, at the end of the video, venting her frustrations she commented that, “Doctors are dickheads.”

So, okay, we know not all doctors are dickheads. But I think every person– and especially every woman– with a chronic, poorly understood illness out there “gets” the sentiment. Some doctors can and have been absolute dickheads. We’re not just talking honest mistakes, the occasional bad days, or the overwork and burnout that doctors experience from a negligent and abusive hospital system that surely has enough money to hire more personnel if they wanted to.

We’re talking about purposeful CRUELTY. Doctors who chide their patients to their faces, doctors who patronize and are abusive, doctors who are two-faced and make fun of suffering patients behind closed doors, doctors who refuse to refer on to specialists leaving a patient with no more answers than when s/he first walked through the door, doctors whose egos prevent them from admitting to the patient, “I don’t know. But I’ll help you try to find out,” and doctors who assume every weird physical symptom must be anxiety in disguise or some other psychological disorder because surely medicine knows everything and weird symptoms are simply impossible. (If I’ve learned anything from EDS and its related conditions, EXPECT THE WEIRD!!)

...I mean, of course not all doctors are dickheads. But unfortunately, when dealing with a bunch of traumatized people, accuracy is small potatoes compared to the underlying emotional message. What’s important is that many people in the chronic illness community feel like a lot of doctors are dickheads because that’s precisely how these patients have been treated by many doctors. And believe me, I’ve heard some absolute horror stories. Sh** that would shock you green!