Fun with Risk Corridor Payments: One lucky Texan could get rebate checks for $982 million!*

Regular readers may have noticed that I didn't post a single blog entry on Tuesday even though there's been a ton of healthcare policy stuff going on. No, I didn't take the day off; I started poring over a spreadsheet at around 10am and was working on it almost nonstop all day.

I gave a more in-depth explanation in my previous post, but the bottom line is that for the first 3 years, insurance carriers which did unusually better than expected were required to pay a portion of their profits into a central fund, while carriers which did unusually worse than expected were promised partial reimbursement via that same fund. If the amount put in was greater than the amount paid out, the government would keep the difference. If the amount owed was greater than the amount brought in, the federal goverment was supposed to pay the difference.

Halfway through the first year of the program, however, congressional Republicans insisted that the rules of the Risk Corridor program be changed in such a way that if there was a shortfall in the fund, the "losing" insurance carriers were essentially S.O.L...and that's exactly what happened.

In late August 2015 (I believe), the federal goverment paid 12.6 cents on the dollar for 2014 ($362 million / $2.87 billion = 12.6%). This, along with some other factors, led to financial ruin for nearly 20 smaller startup carriers, most of which didn't have the cash reserves to help them weather the Risk Corridor storm. I wrote obituary blog entries for yet another victim of the Risk Corridor Massacre weekly between August and November 2015...in a few cases, two of them went bankrupt the same day.

The larger carriers, with massive cash reserves were able to absorb their losses--in some cases totalling hundreds of millions of dollars--while they filed class action lawsuits to force the federal government to pay up. Again, I went into the backstory of this mess on Monday.

The bottom line is that a year after everyone thought the suit was dead and the carriers would have to kiss over $12 billion goodbye forever, the Supreme Court announced that they're gonna hear the case after all.

On Tuesday morning, however, Dave Anderson posted something which caught my attention:

When I first read about this on Monday, I assumed that if SCOTUS ends up ruling in favor of the insurance carriers and orders the government to pay up, it wouldn't be that big of a deal for anyone else. That is, I figured it'd be a tidy windfall for the carriers and their shareholders, but I also assumed that the revenue would simply be officially recorded in their 2014-2016 books and that'd be that. It isn't going to bring the bankrupt carriers back from the dead, unfortunately...their creditors will be happy, of course, but those 20-odd Co-Ops and other small insurers have been dead & buried for several years now.

As Anderson put it:

Let’s assume the insurers win a full judgement in their favor and the US judgement fund starts cutting $12 billion dollars worth of checks a month after the decision.

There are two classes of insurers to consider; the living and the dead.

For insurers that are still an ongoing concern, not much happens. it depends on how the cash falls on the balance sheet. If the cash of an award is attributed to the years where the risk corridor losses were accrued, not much happens. For example, my former employer, UPMC Health Plan is owed over $60 million dollars for just 2016 losses. If they get a $60 million check in the spring of 2020, the accountants have to re-adjust the 2016 books and that is about it. A $60 million swing may affect bonus and perhaps Medical Loss Ratios. It is a lump sum windfall that does nothing to alter future decision making. At the smallest and most thinly capitalized surviving insurers, a lump sum windfall may rebuild capital reserves from low to high levels which may have incremental downward pressure on future premiums, but that is a bank shot of a move.

It was Anderson's mention of Medical Loss Ratios which perked my interest:

Anderson almost immediately added an update to his post:

Update 1 However, risk corridor money has been treated on a cash basis. This means that an insurer that received 12.3% of the 2014 obligation in 2015 put that money onto their 2015 books instead of their 2014 books. If this holds, then there would be a huge bolus of money hitting 2020 books and thus hitting the 2018-2020, 2019-2021, and 2020-2022 MLR calculations without any underlying claims. This would significantly flow back to current year consumers as larger rebates and lower premiums. (End Update 1)

Let's go back and review how Medical Loss Ratios work:

Their MLR was way too high the first two years...in fact, they lost money in 2014 and probably in 2015 as well, since administrative overhead/etc. costs more than 5%. things started to stabilize in 2016, and starting in 2017 they actually overshot the mark. In 2018 they seriously overpriced, so they instituted a price freeze in 2019.

To give you an idea about how much money we're talking about, here's how much was paid out in MLR rebates to Individual market enrollees over the years:

The 2018 payments won't be announced until sometime in August or September, I'd imagine, but I expect them to be pretty large possibly up to $200 or so on average?...and 2019's will likely be larger still, paid out in summer of 2020. (NOTE: Not every carrier has to pay MLR rebates every year, and the amounts vary widely. The whole point of the program is to encourage carriers not to price gouge by keeping their premiums, and therefore their profit margins, within a limited range. I've been enrolled in an ACA exchange plan since 2014 and I've never received a rebate check yet, though I do know a few people who have).

OK, so what's all this have to do with the Risk Corridor Massacre and the impending Supreme Court Case?

Well, did you notice anything about the dollar amounts above? They range from around $400 million/year up to $1.1 billion nationally.

If the Supreme Court rules in favor of the plaintiffs, and if they order the federal government to pay out the years-past-due Risk Corridor funds, that will likely mean a whopping $12 billion windfall being dumped into the laps of several hundred insurance carriers around the country all in one shot.

As Dave Anderson noted, a lot depends on how that income is categorized by the carriers, but if it gets counted as 2020 premium revenue, that means any insurance carrier which is already hovering around the 80% MLR threshold could very well have to pay a large chunk of that money to their enrollees...likely in August of 2021, since SCOTUS probably won't even hear the case until next year.

But if everything falls into place as I've described here, we could be talking about some pretty hefty rebate checks in 2021...all thanks to the Affordable Care Act, otherwise known as Obamacare.

How large? Well, that's what I spent all day Tuesday slaving over a hot spreadsheet to figure out. Here's the raw Risk Corridor tables for 2014, 2015 and 2016. They're broken out by state, by individual & small group market, and by how much each insurance carrier had to pay into the fund as well as, more importantly, how much they were owed for each year.

Oh yeah...and as you can also see, they're only available in static PDF format.

So what did I do? Yes, I copied and pasted the entire thing into plain text format, then spent hours cleaning up the formatting, converting spaces into tabs and so forth to prepare all three of them to be entered into Excel.

After wrestling with the formatting some more and cleaning everything up, I think I've successfully boiled it down to the following (click images for full-size versions): 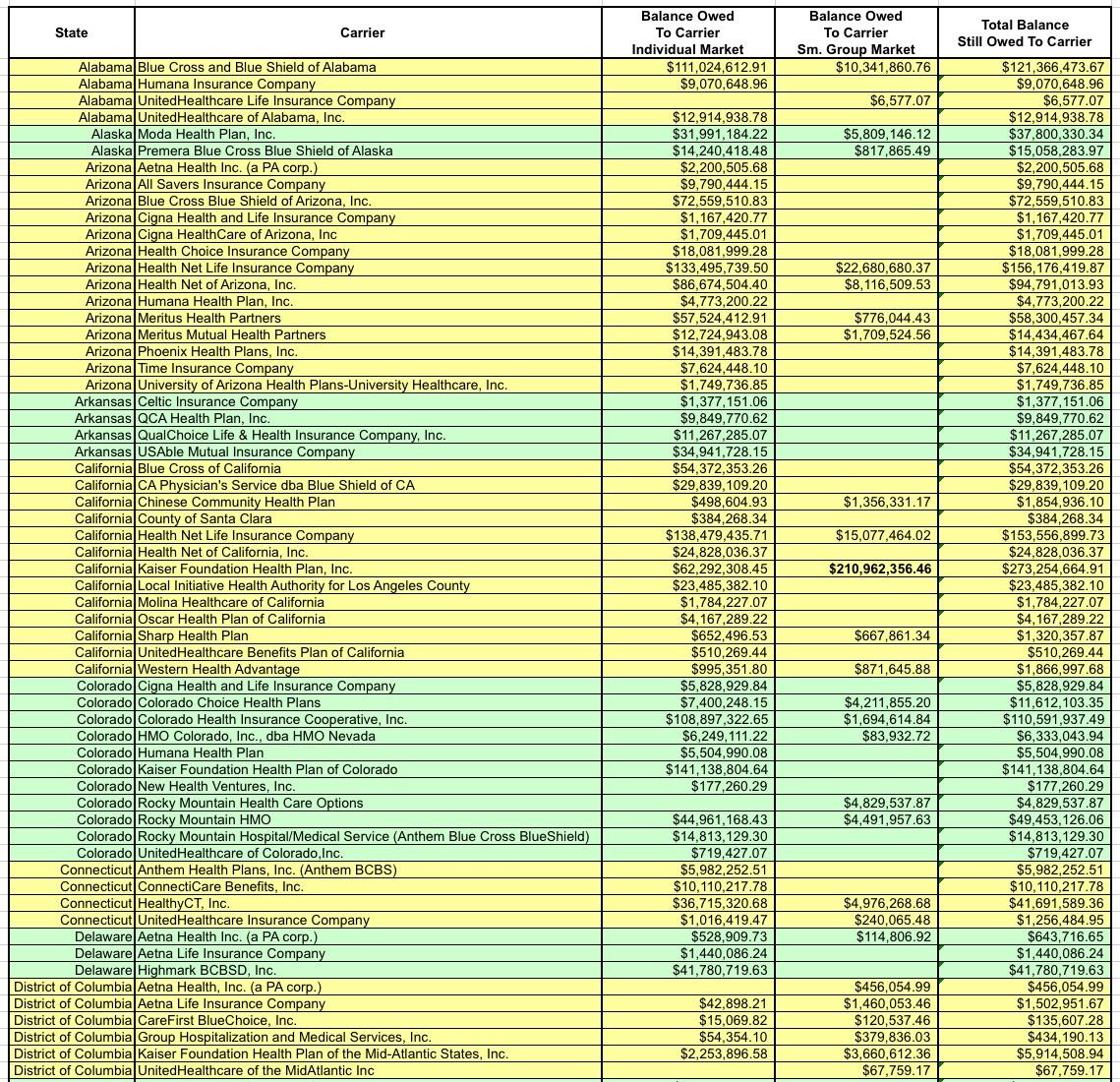 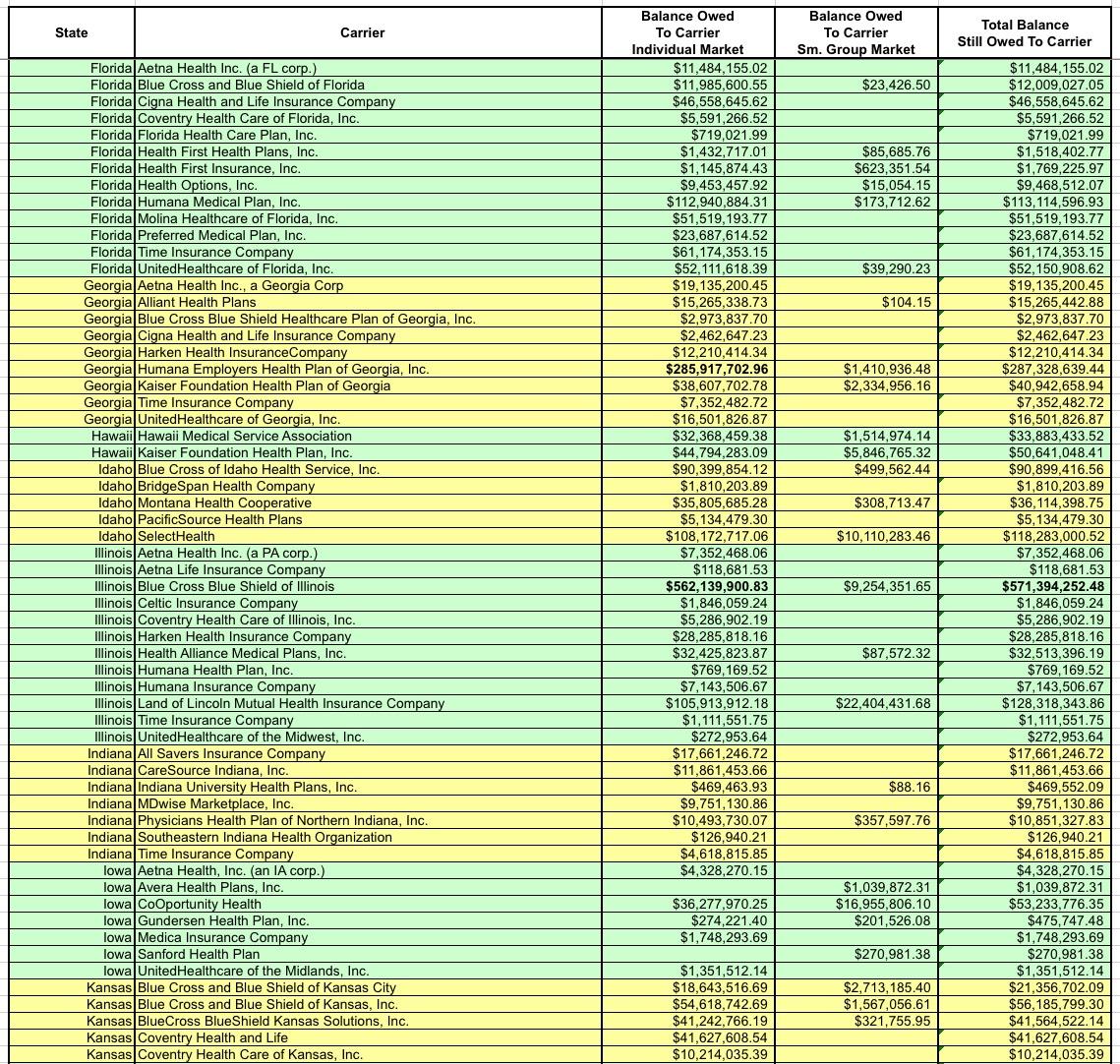 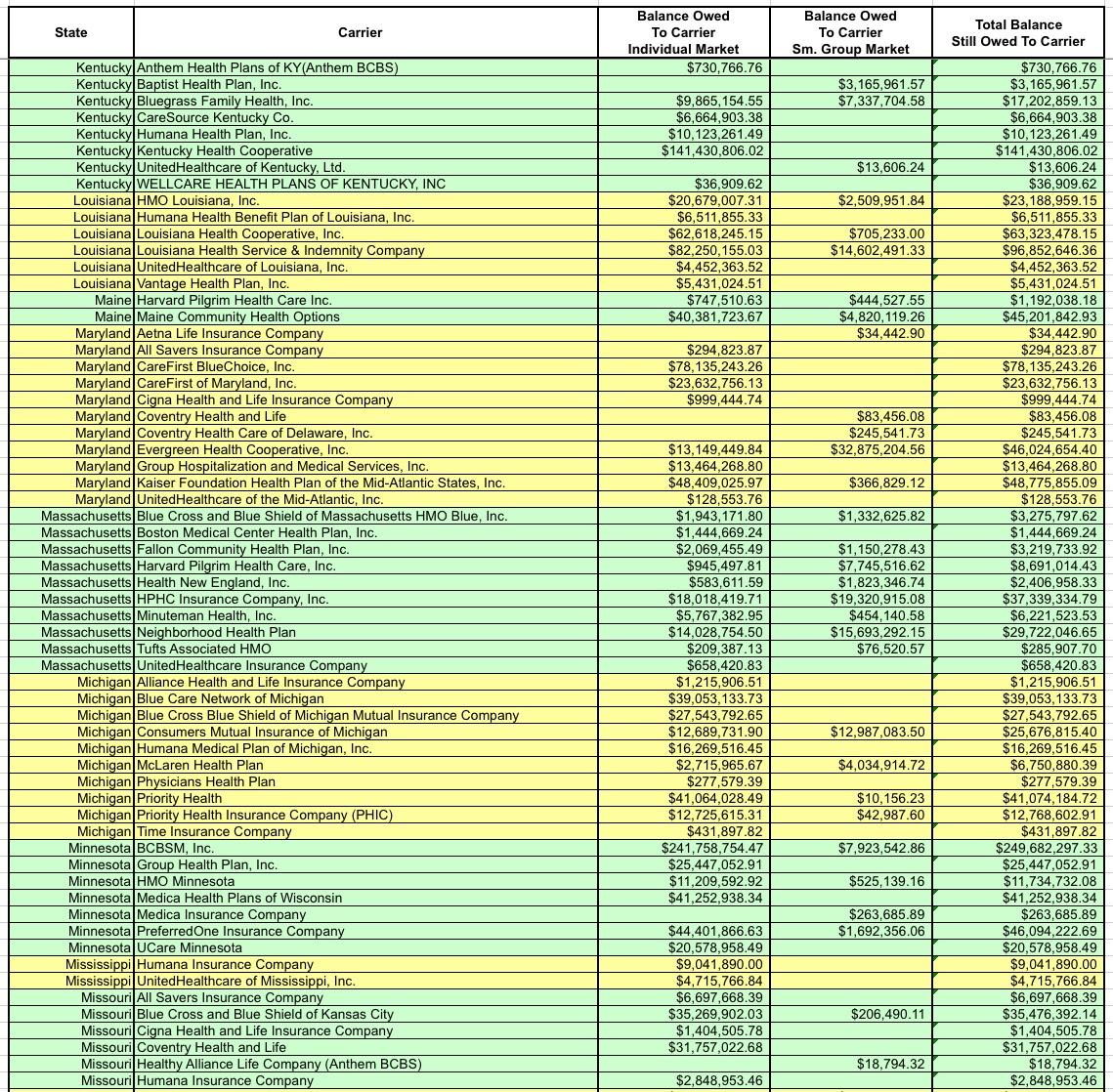 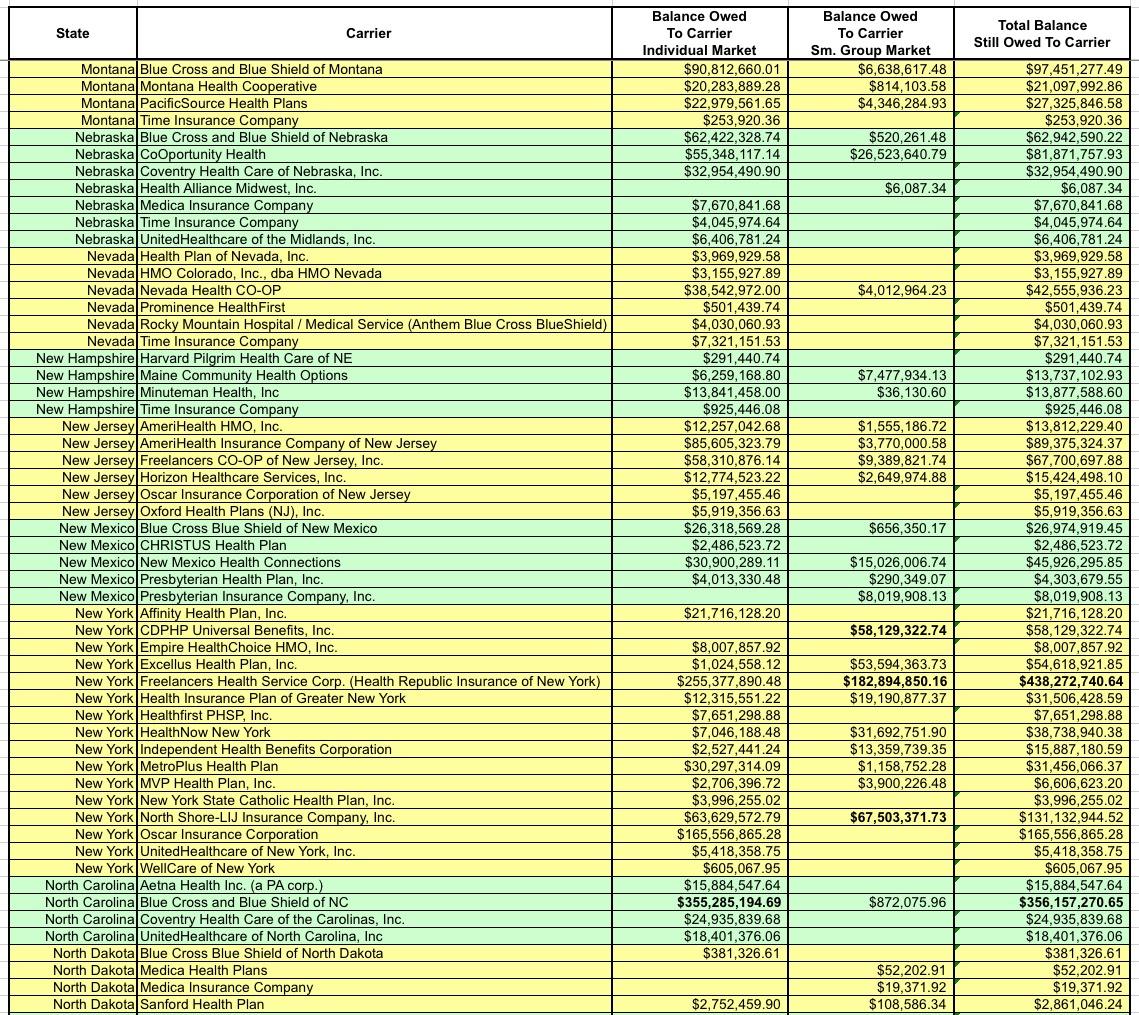 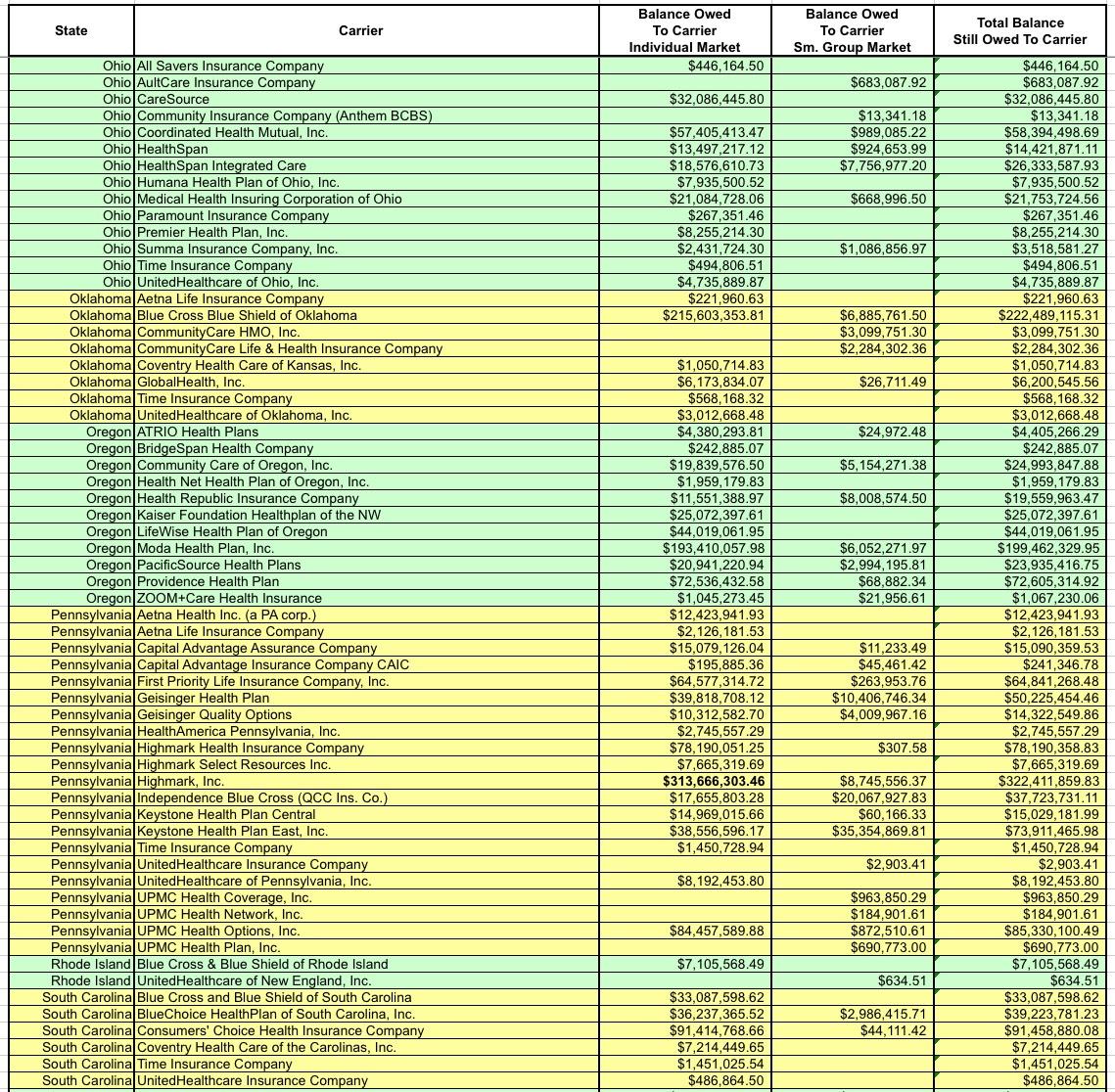 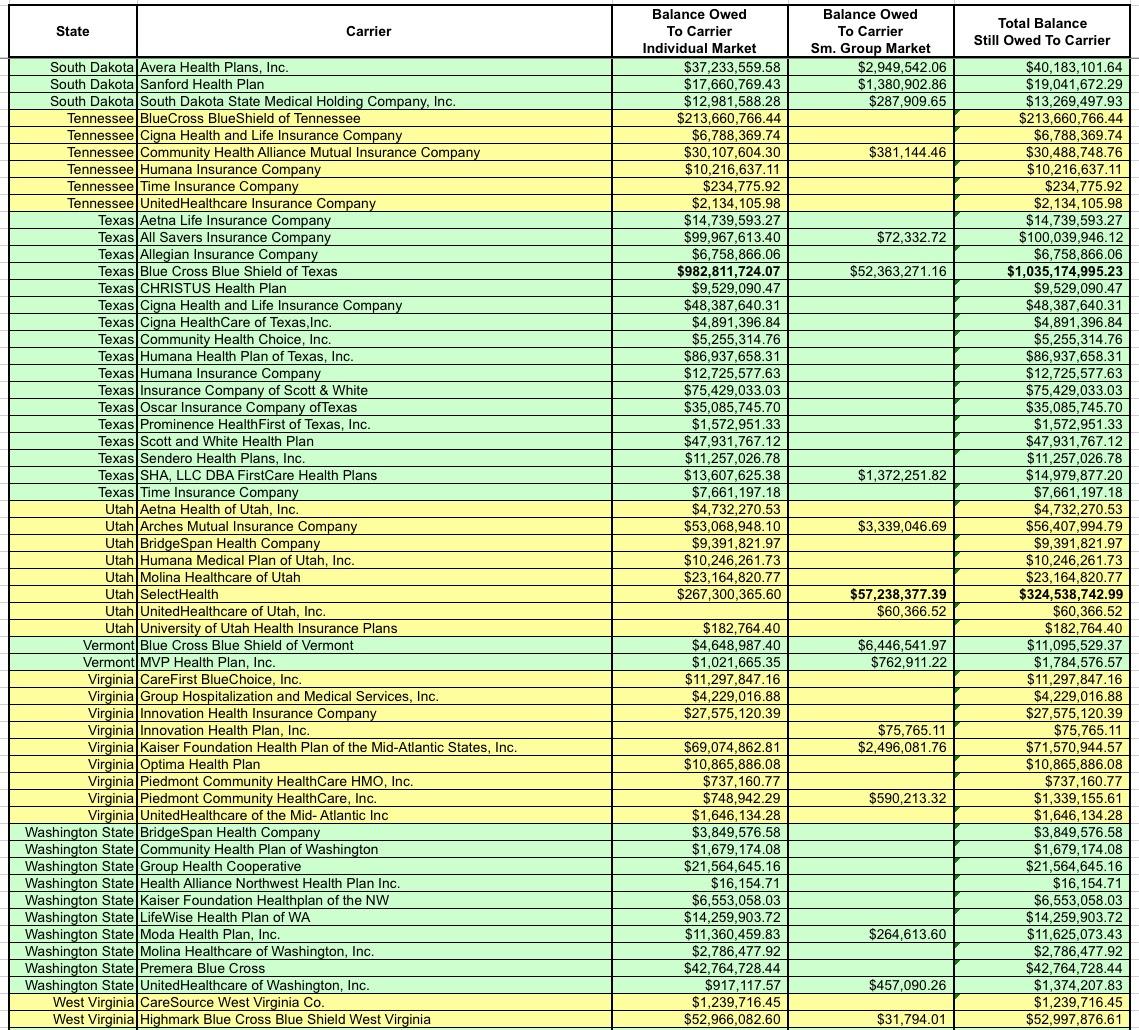 I don't know how many Indy market enrollees BCBSTX will have in 2020, but as of last year I have that number down as 390,000 Texans. IF that proves to be accurate, and if BCBSTX gets their $982 million, and if their MLR was already at or below the 80% threshold over the next 3 years, that would mean enrollees would receive three checks totalling around $2,500 apiece. NICE!

What happens if they’ve since pulled out completely, though?

Don't get me wrong: I realize that Blue Cross Blue Shield of Texas is not likely to pull up stakes. Nor are they likely to pare down their individual market enrollment by 99% (although they did completely cut out all indy market PPO policies back in 2015, kicking 367,000 enrollees to the curb...and from the table above, it's pretty clear why)...

And what about...well, you read the headline.

OK, that's absurd...but so is everything else surrounding ACA lawsuits, so what the hell?