DC has two unusual regulations which set it apart from the actual states: First, around 11,000 of the enrollees on the DC SHOP exchange (for small businesses) are actually members of the House of Representatives, the Senate and their staffers (yes, "Congress" is officially designated as a "small business" in this instance...it's a stupid story which can mostly be pinned on Sen. Chuck Grassley). Second, DC regulations require that all individual and small group market polices in the District be sold via their ACA exchange. DC solves the off-exchange market confusion by simply eliminating the off-exchange market. In addition, DC chose not to allow "transitional" policies either. As a result, aside from a small number of grandfathered policies, pretty much the entire DC indy & small group markets should be reflected below.

These are the same 4 companies which are currently on the exchange. It's interesting that they're increasing the variety of policies being made available next year in both the indy and sm. group markets.

It's important to note, again, the impact that uncertainty about things like CSR reimbursements, enforcement of the individual mandate penalty and so forth by the Trump administration are having on these rate increase requests. Note that "increased morbidity" is listed as the number one factor in these hikes on the individual market by CareFirst...which is also asking for the highest rate increases.

In addition, as Louise Norris notes:

DC Health Link Director, Mila Kofman reported in a podcast in mid-April that the market stabilization rules that HHS finalized in April 2017 (which had not yet been finalized as of Kofman’s podcast) could end up having the opposite effect, creating less stability in the insurance markets. Specifically, she pointed to the proposed rule (which was finalized even more strictly than proposed) that allows insurers to deny coverage to applicants who lost coverage under one of the insurer’s plans within the past 12 months for non-payment of premiums. Under the new rules, the insurer can require the applicant to pay up the past-due premiums before enrolling. Kofman points out that this situation (loss of coverage due to non-payment of premiums) is particularly likely among young, healthy enrollees. And the new rules make them less likely to re-enroll, since they may not have the money to pay up past-due premiums before re-enrolling.

Mid-way through the 2017 open enrollment period, the percentage of new enrollees in DC Health Link was 47 percent higher than it had been a year earlier (mid-way through the open enrollment period for 2016). And 60 percent of the new enrollees for 2017 at that point were 34 or younger, which is the demographic that’s most needed in health insurance risk pools to balance out the claims costs for older, sicker enrollees. That’s also a demographic more likely to skip enrollment if roadblocks (like those in the market stabilization rule) are put in their way.

Kofman explained that the best thing the Trump Administration could do in terms of market stability is to ensure ongoing funding of cost-sharing subsidies, strongly enforce the individual mandate, and stop creating uncertainty via continued talk of ACA “repeal and replace.” She also reiterated DC leadership’s commitment to making the insurance market work, and the fact that all options are being considered in terms of localized actions that might need to be taken to stabilize the market.

As usual, I've compiled the rate filings for both the individual and small group markets and plugged them into the spreadsheet below. Assuming the initial requests are approved as is and all current enrollees were to renew their existing policies, the weighted, unsubsidized average rate hike on the indy market would be around 26.2% while the small group market would be around 11.4%. 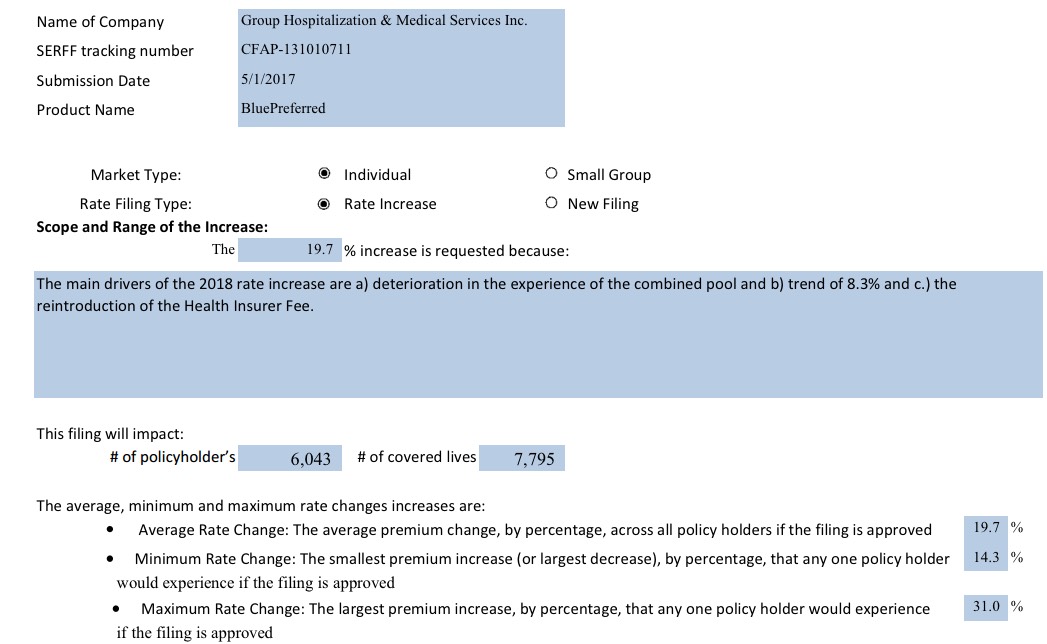 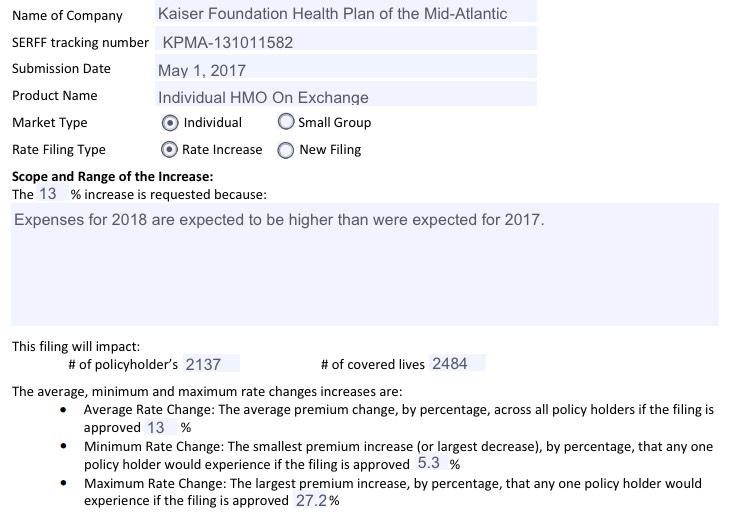 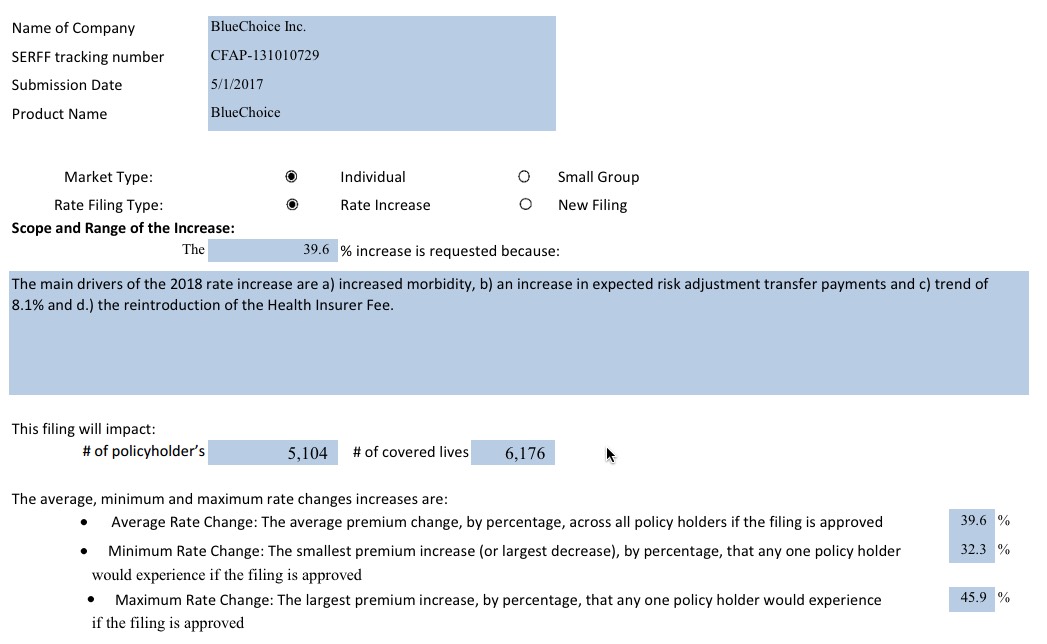 UPDATE: Only about 30% of DC's exchange enrollees chose Silver plans, so the estimated 15% rate increase which would have to be tacked onto them if CSR payments aren't made next year ends up only being around 4.5% when spread across all ACA-compliant policies. From what I can tell from the filings, it looks like the 26.2% average requested rate hike assumes CSR payments will be made and the individual mandate will be enforced, so the additional 4.5 percentage points would be tacked on top of that, looking something like this: