Salem, OR—Oregon consumers can get a first look at requested rates for 2020 individual and small group health insurance plans.

“It’s early in the process, but we are encouraged to see carriers providing more options to Oregonians by expanding into both rural and coastal communities, and the market stabilizing in spite of uncertainty at the federal level,” said Insurance Commissioner Andrew Stolfi. “Now it is time to start our open and thorough review process that allows Oregonians to provide input on the filings that affect them.”

Moderate rate increase requests, recent health insurance company financial statements, and expansion into additional counties by multiple carriers reveal that the Oregon health insurance market is stabilizing in spite of continued uncertainty at the federal level. The Oregon Reinsurance Program continues to help stabilize the market as well. It consistently lowers rates by 6 percent each year.

Health insurance companies submitted rate requests to the Department of Consumer and Business Services, Division of Financial Regulation on May 13. Over the next two months, the division will analyze the requested rates to ensure they adequately cover Oregonians’ health care costs. The division must review and approve rates before they are charged to policyholders.

The requested rates are for plans that comply with the Affordable Care Act for small businesses and individuals who buy their own coverage rather than getting it through an employer.

Later this month, Oregonians will be able to compare their health plans and submit comments at oregonhealthrates.org. Public hearing dates will also be posted to the site.

Preliminary decisions are expected to be announced late June, and final decisions will be made in late July.

That seems to be pretty cut & dry: Preliminary requested rate changes ranging from a 3.2% drop to a 13.5% increase on the individual market, averaging 3.3%.

UPDATE: I originally had the average skewed way too high because of what seemed to be a massive number of Kaiser enrollees (over 468,000, which is several times larger than Oregon's entire individual market!). However, it turns out that was member months, not members...you have to divide by 12 to get the correct number. Once I did that, the rest falls into place. I still get a slightly higher statewide average of 3.43% vs. the 3.3% noted in the press release, but this is pretty typical due to slight variances in numbers and percentages reported in different filing forms from different dates, etc. 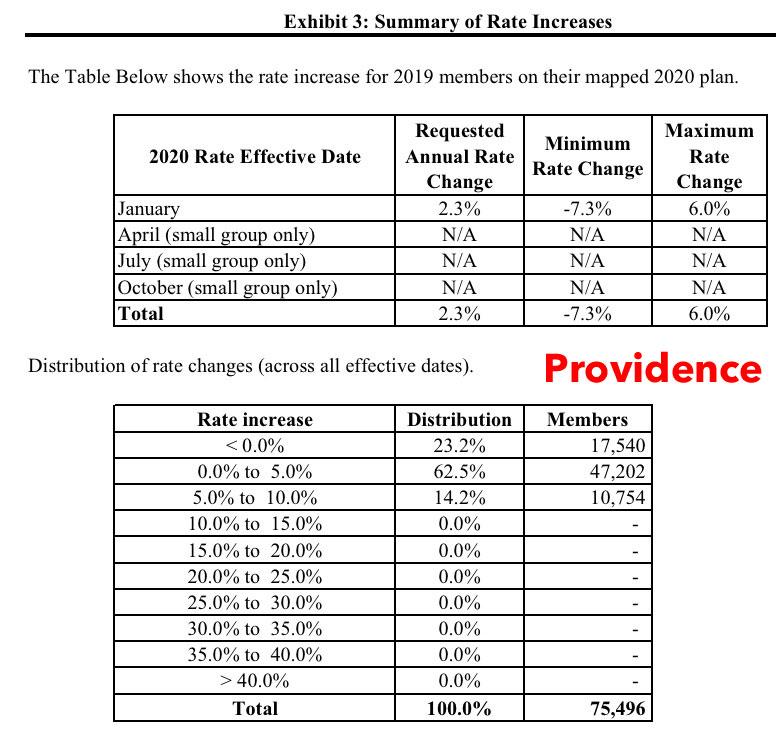