For those who still don't get how stupid the Electoral College is...

Just a quick note regarding the whole Popular Vote / Electoral Vote brouhaha in light of Donald Trump ending up as President in spite of Hillary Clinton receiving over 2 million more votes nationally.

As of this writing, Hillary Clinton's national popular vote tally stands at exactly 64,478,925 to Donald Trump's 62,352,480, with an additional 7,169,272 people having voted for other candidates (Gary Johnson, Jill Stein, various other 3rd party candidates and a smattering of write-in votes). That means Clinton is ahead of Trump by over 2.1 million votes, and I understand there's still up to 1.5 million more left to count, mostly in California. By the time the dust settles, it's conceivable that she could lose the electoral college--and therefore the Presidency--while having beaten Trump by as many as 2.6 million votes.

And her final losing margin in the 3 closest states which caused her to lose anyway?

OK, that's reality. But what if you took this further? 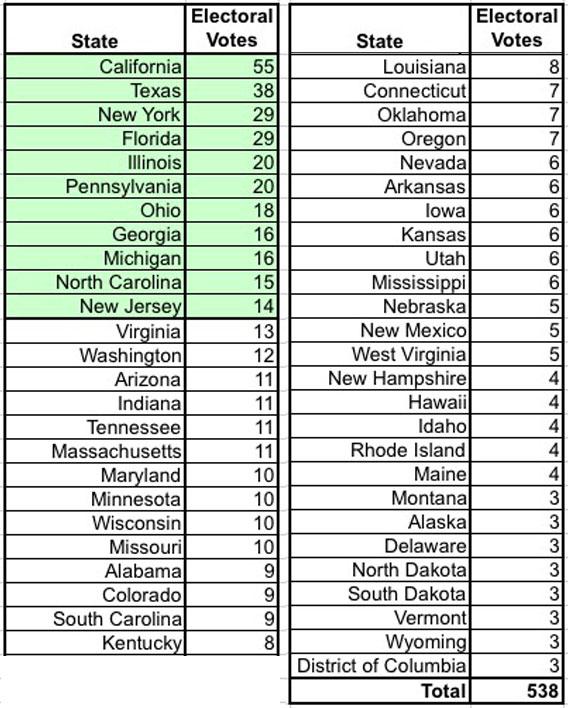 Here's a list of states ranked by the number of Electoral Votes each has. As you can see, the first 11 states add up to exactly 270 electoral votes...enough to just barely win a majority of the Electoral College (538 total).

Remember, they would only have to win each of those states by as little as 1 vote...so, if we used 2016's turnout as an example (just over 135.2 million votes cast total), that would mean Candidate X could have received as few as 37 million votes across those 11 states (just over 50% in each of them) while their opponent received the other 49.9% in those 11, plus 100% of the vote in each of the other 39 states + DC (98.2 million total) and still have won the electoral college.

Yup, under our current system, Candidate Y could potentially receive as much as 73% of the vote and still lose the Presidency.

But wait, it gets even worse. Let's ramp up the theoretical even further.

Let's say that every single eligible U.S. citizen were to register to vote. According to the United States Elections Project, that's 231,556,622 people nationally.

Let's say that every single eligible voter were to turn out in the other 39 states + DC...100% turnout...and every single one of them voted for Candidate Y. They would have received 105,192,675 votes.

On the other hand, let's say that actual voter turnout in the top 11 EV states was truly horrible: Only 1 person. Not 1%...one individual voter. A single voter turns out in each of those states, and each of them voted for Candidate X.

Now, obviously this is an absurd scenario. Several people have already stated that if you really want to get into hypothetical situations, if you only had one person vote in the entire country, that person would receive 100% of the Popular Vote.

Yes, that's true...but even in that situation, they still wouldn't have won the Electoral College...because winning the EC requires a majority of all Electoral Votes. A one-person-voting-nationally scenario would mean that no one voted in 49 states...which means an absolute tie in those states...which means neither candidate would receive that state's EVs. Even if the person who voted lived in California, they'd still only receive 55 Electoral Votes. Result? It would be thrown over to the House of Representatives to decide who becomes President.

In addition, the scenario I describe above, while obviously outlandish, is a hell of a lot closer to the true state of affairs than it sounds like at first. Hillary Clinton did receive over 2 million more votes than Donald Trump, and will still end up losing the Presidency because around 103,000 of the 64.5 million (potentially up to 65.5 million) votes she received didn't happen to be in the right states. That's 0.16% of her voters. *see Update x2 below

While my "11 votes nationally" scenario would never happen, something closer to my "73% and still loses" version is at least remotely possible. Perhaps not 73%, but I could see a candidate receiving, say, 55% of the total vote and still losing.

I've heard all the arguments for keeping the electoral college. The only ones which hold any water are:

This is a reasonable concern...but it also means that there'd be far more urgency on the part of every state to take election security seriously.

The final counterargument here is that if there had been no Electoral College in place for the 2016 election, the entire campaign would have been handled differently by both candidates. This is true. Advertising would have been spent differently, as would campaign appearances, canvassing/phonebanking, GOTV efforts, policies, speeches, etc etc. In fact, without an EC, there's no guarantee that Clinton and Trump would have even been the nominees in the first place...it's likely that the primary strategies would have played out differently, with other candidates doing better (for that matter, the list of primary candidates might have been different as well).

In addition, it would have beefed up overall turnout tremendously. It's possible that Trump would have won the popular vote, since millions more Republicans/conservatives would turn out in Texas, Oklahoma. Alabama, etc...but at the same time, there are millions of Democrats/liberals from those states who would turn out then as well. The same holds true in reverse in in blue strongholds like California, Illinois and New York.

And really, the real goal here is for everyone to show up, right?

*UPDATE x2: The real 2016 numbers have been updated since I posted this last week. None of these change the hypothetical/theoretical examples much (since those numbers are so silly to begin with), but the most painful one is this: Hillary Clinton's losing margin across the three states in question (Wisconsin, Michigan and Pennsylvania) now appears to have dropped to just below 80,000 votes.

Eighty thousand votes. That's a city the size of Farmington Hills, Michigan. That's a mid-sized college football stadium. That's 0.12% of the total number who voted for her. That's 0.06% of all votes cast nationally.