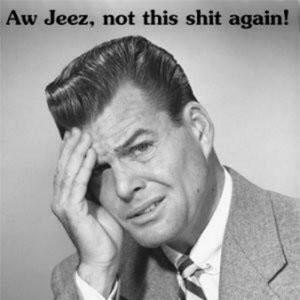 The Centers for Medicare & Medicaid Services (CMS) issued a request for information (RFI) today that solicits recommendations on how to eliminate regulatory, operational and financial barriers to enhance issuers’ ability to sell health insurance coverage across state lines. This announcement builds on President Trump’s October 12, 2017 Executive Order, “Promoting Healthcare Choice and Competition Across the United States,” which intends to provide Americans relief from rising premiums by increasing consumer choice and competition.

,,,The RFI will be open for public comment for 60 days.

View the Request for Information

I can't believe that they're still trying to dredge this back up again.

For years...decades, really...Republicans have been trying to claim that "Buy Insurance Across State Lines!" would be a panacea for all of our health insurance expense woes. Every time there's a debate about how to lower health insurance costs, BASL is the stock answer they give (it's right up there with "Tort Reform" on the Republican Healthcare Bingo board).

The idea behind BASL is that if health insurance in your state is too expensive, you can simply enroll in a less-expensive policy available in a different state. Presto, problem solved!

Once again, there are several major problems with this logic. First of all, it completely tramples on states rights...something which Republicans used to supposedly care about...regarding setting their own minimum threshold of insurance regulation. This is also a massive threat to the stability of risk pool in the first state, since siphoning off healthier, lower-cost enrollees into out of state plans would leave the rest of the risk pool that much sicker and more expensive to treat, leading to even higher premiums.

Setting that aside, however, the next issue pretty much stops things in their tracks: The Affordable Care Act ALREADY ALLOWS insurance carriers to do exactly this:

Buying health insurance across state lines has been proposed as an alternative to the Affordable Care Act – but it’s already in the law.

The Republican presidential front-runners, along with their trailing competitors, are all big fans of allowing Americans to buy health insurance across state lines, arguing that doing so would boost competition, resulting in lower costs and greater choice for consumers. Often, conservatives have framed such a plan as part of a replacement package for Obamacare.

The thing is, such permission is already part of President Barack Obama's health care law.

The little-known provision, found in section 1333 of the roughly 1,000-page Affordable Care Act, allows for states to create "health care choice compacts" permitting insurers to sell policies to consumers in any state participating in the compact, as long as they follow specific rules.

In fact, guess what?

Note that the article above by Kimberly Leonard is from 2016...and in fact the compact provision has been part of the ACA since it was signed into law in 2010.

OK, what else? Well, another slight bump in the BASL road is that even with five states enacting these compacts, not a single insurance carrier has expressed any interest in utilizing them, with very good reason: A Michigan resident enrolling in a healthcare policy sold out of Alabama isn't going to find it particularly useful unless they plan on making a 15-hour drive every time they have to visit the doctor or pick up a prescription.

In order for an insurance carrier to set up shop in a state, they have to establish a network of doctors, hospitals, clinics and other participating healthcare providers. Furthermore, those providers are subject to the home state's regulatory structure, not those of the state the carrier is based in. That takes an awful lot of time, money and resources to do, and can get confusing when the carrier is trying to intermingle the rules of one state with another in their internal operations. It's simply more trouble than it's worth.

As a result, if a carrier really wants to expand into a different state, all they have to do is establish a subsidiary corporation in that state with its own legal entity status, staff, policy offerings and so forth...which is exactly what some carriers have done. In case you haven't noticed, health insurance conglomerates like UnitedHealthcare, Aetna, Molina and so on do offer plans in more than one state...some are available in dozens, in fact.

Finding #7: Aside from conservative think tank types, across-state lines laws lack a champion. Neither insurers nor the consumers the laws were designed to benefit lobbied for these laws. Nor did they advocate for their implementation.

UPDATE: Over at Balloon Juice, Dave Anderson points out that there are a few circumstances in which selling insurance across state lines make sense...but that this is very dependent on everyone involved showing good faith in how it's structured:

I don’t think that selling across state lines will do much if we assume that there is not a race to the bottom in standards.

...There is value in merging small risk pools. I could see the logic of North Dakota, South Dakota and Wyoming (three of the four sub 25,000 states) cooperating in order to minimize catastrophic claim risk. That is valuable and it would reduce premiums by a couple of bucks per member per month. It won’t solve the underlying structural cost drivers of care, but it would shave off a point or two in costs.

...As long as the interstate compacts are voluntary, opt-in agreements, this is an edge smoother. It is not a game changer.

Fair points all around. In addition, my "15 hour drive" example above wouldn't apply in the case of two small states located next to each other, like Rhode Island and Connecticut (it's only a 90-minute drive from Hartford to Providence, for instance).

However, as Anderson also notes, the key is that the arrangement has to be voluntarily agreed to on the part of all of the states involved...which is exactly what the ACA already allows for. And again, in over 5 years there hasn't been a single sign of interest from any carriers in the six states which have signed on to such a compact.