Trump is so incompetent he can't even SABOTAGE correctly. 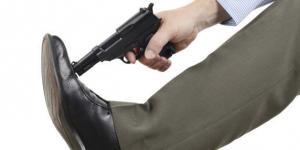 Note: Huge props to Amy Lotven for breaking this story!

WARNING: Before you read any of the following, first read this entire post, which explains the latest insane twist in the never-ending Cost Sharing Reduction legal saga. Yeah, I know, I know...just do it. I'll wait.

OK, now that you're all caught up, there's yet another aspect to this craziness which has arisen.

Towards the end of the first post, I noted that:

First of all, it turns out that the amount of money potentially at stake is even higher than that:

More to the point, however, is the first sentence: I was a bit fuzzy about just how the ACA Medical Loss Ratio rebates are divvied up. There were likely around 13 million people enrolled in ACA-compliant individual market policies in 2018. If that $12 billion was sliced up evenly, that'd be around $923 apiece. I know the amounts vary, but wasn't sure how they calculated it.

This morning a Twitter friend asked about this exact issue:

Hey @charles_gaba @bjdickmayhew - if insurers give out MLR rebates to *all* their customers, does this mean customers over 4xFPL who paid a lot more (due to Trump refusing to pay CSR) won't get their full extra payments back? https://t.co/uSbPuALck7

...which led to a discussion on this issue with several of my fellow healthcare wonks, including David Anderson and Wesley Sanders, as well as Josh Schultz and Michael Capaldo...and the answer takes the already-insane implications and makes them even more potentially bonkers:

Me: I was wondering the same thing...is the rebate money allocated equally to all policyholders, or is it a percentage of the full premium price paid (which would be the most logical)?

Dave Anderson: Let's assume 2 people. One earning 201% FPL in a Gold Gap county and the other earning 600% FPL. Both buy Gold HMO. Mayhew Insurance Company aggressively #Silverload so Gold HMO is $0 for a single 40 y/o @ 201 FPL after APTC Person A & B each get the same MLR check. Right?

Me: So some subsidized enrollees could potentially make a PROFIT off of this?? Good grief.

In other words, the MLR rebates are based on a percentage of the full price premiums regardless of whether the enrollees received subsidies or not.

The $25K guy receives $490/month in subsidies. and uses it to buy a Gold plan which would normally cost $500/month but only costs him $10/month thanks to the subsidies, or $120 for the year.

Let's assume the CSR "double dipping" windfall pushes the insurance carrier's MLR down to 75%. That means 5% of the full premiums ($6,000) are rebated to both enrollees, since the subsidies aren't taken into account. EACH enrollee would receive $300 in MLR rebates.

That's right: The $25K guy just went from getting a Gold plan for just $10/month to getting a free Gold plan plus an extra $180 in his pocket.

And the craziest part is that the only reason why the $25K guy's subsidies were so high is because of the Silver Loading, which was only done because the CSR reimbursements were cut off by Trump in the first place.

Anderson: oh yeah, and the kicker is that it is treated as a rebate so the tax and benefit eligibility implications are not normal either. This is one hell of a potential income shock study

Sanders: Correct, it is not taxable. Because the premiums were “paid” with your post tax dollars that you happened to also get a refundable tax credit for.

Anderson‏: how does an MLR rebate apply to MAGI calculations and Medicaid income eligibility calculations?

In other words, the $300 MLR rebate in the example above also appears to be tax-free and doesn't even get counted when calculating whether or not you're eligible for other types of government programs or assistance. (For example, normally, your income going from $17,000 to $17,300 would slightly lower your APTC subsidies for the year, by perhaps $3 per month; since it isn't counted as MAGI, however, your income would still stand at $17,000 and your subsidies wouldn't be reduced.

The discussion went on into the minutae of IRS regulations etc, and as I said before, the odds are high that the "double dipping" ruling will be overturned on appeal, and that could take years to become finalized (up to the SCOTUS, perhaps?), so I'd advise ACA enrollees not to go out and spend their hypothetical windfall just yet. It could be 2-3 years before any of this actually results in money in anyone's pocket, if ever.

However, this does once again underscore the potential for unintended consequences of actions. As I summarized:

IF the CSR MLR rebate checks do end up being cut before the 2020 election happens, don't be surprised to see Trump actually trying to claim that this was his intent all along, and that he "fixed Obamacare" by "helping out the poorest among us" or some such garbage.