Until now, I've been missing the final 2019 Open Enrollment Period numbers for two state-based exchanges: Vermont and the District of Columbia. VT is still radio silent, but last night the DC exchange authority held their monthly meeting and released their latest data report.

There's a bunch of handy demographic data included in the report...but some of it is also confusing and difficult to get an accurate year-over-year measurement due to a difference of time periods and enrollment status.

I've put in a request to sort some of this out and will update this entry if/when I receive clarification.

For instance, the DC exchange says that they have the following number of residents currently effectuated as of February 10th: 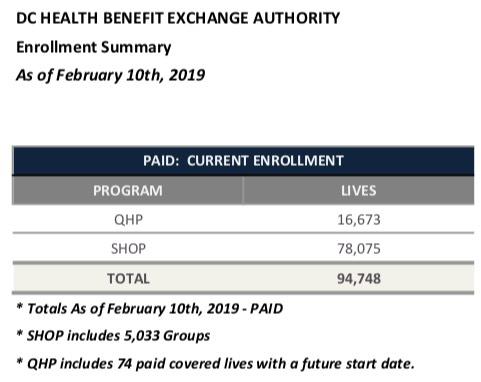 Current effectuations, of course, are handy but aren't the same as QHP selections, which is what CMS includes in their annual OEP report. Here's the plan selection numbers:

OK, this table seems to be pretty clear cut: A 7.5% drop in QHP selections year over year, with the exact same percent drop (7.5%) for both renewals and new enrollments. Fair enough.

Here's where it gets slightly confusing: Last year's number ran through February 5th (DC bumped their deadline out an extra 5 days), while this year's numbers include 4 extra days (they tacked on an extra six days this year, through Februay 6th, but the numbers above are through February 10th). This means the total above includes perhaps a hundred more people. Not a major issue by itself.

In any event, here's the rest of the report.

UPDATE: OK, I've received some clarification: The numbers in the report above include all QHP selections, even those which were actively cancelled by the enrollee or terminated by the exchange before the end of Open Enrollment. CMS's report is lower because they subtract those.

This makes sense, and it's how they handle every other state as well, but it still leaves me scratching my head a bit because the CMS numbers for just about every other state-based exchange generally either match up perfectly or are only slightly lower most years. In DC's case, there's a whopping 15% gap between the two, which is huge.

IF the discrepancy between the two is similar this year, that should make CMS's official DC number around 17,760, or around 7.9% lower year over year...but it's also entirely possible that the DC exchange has done a much better job of cleaning up their data before reporting it in the first place, in which case it could be a smaller drop, even or even above last year. No way of knowing until the CMS report comes out.