That figures...after waiting for this report to be released for like 3 hours earlier today, it just figures that it would be released right after I had to go pick my kid up from school...updating post as quickly as possible...refresh for updates...

NOTE: Last year CMS modified the official QHP selection total downwards by around 79,000 enrollees the week after the Week 7 report was released for various reason, mostly due to people making last-minute cancellations to their renewals or having their enrollment applications denied due to problems with legal residency verification or other data matching problems.

BREAKING: This just in via CMS..

In week seven of the 2019 Open Enrollment, 4,322,450 people selected plans using the HealthCare.gov platform or were automatically re-enrolled in a plan. As in past years, enrollment weeks are measured Sunday through Saturday.

This Open Enrollment snapshot covers the period from December 9, 2018, to 11:59PM Eastern Time on December 15, 2018. The plan selections reported in this snapshot are not final and do not include plan selections for consumers who enrolled in coverage through 3:00AM Eastern Time on December 16, 2018, or consumers who left their contact information at the call center due to high volume. These snapshots provide point-in-time estimates of weekly plan selections, call center activity, and visits to HealthCare.gov or CuidadoDeSalud.gov. The final number of plan selections associated with enrollment activity during a reporting period may change due to plan modifications or cancellations. The Centers for Medicare & Medicaid Services (CMS) plans to release an updated snapshot next week with the final enrollment data.

In addition, the weekly snapshot only reports new plan selections, active plan renewals, and automatic enrollments and does not report the number of consumers who have paid premiums to effectuate their enrollment. This snapshot does not include plan selections from State-based Exchanges, other than those using the HealthCare.gov platform. CMS plans to release a detailed 2019 final enrollment report in March, including final plan selection data from State-based Exchanges that do not use the HealthCare.gov platform. 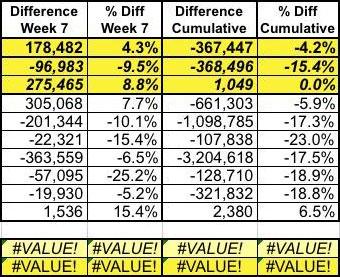 Wow...I'm impressed! The Final Weekly Surge® ended up surpassing last year's Final Week, with 4.3% more people enrolling in the final week than last year. Of course, this is a bit misleading: Last year's Week 7 only included six days vs. seven (12/10 - 12/15 instead of 12/09 - 12/15), so on a day-by-day basis, it was probably still slightly behind...but at the very least most (but not all) of the previous shortfall was made up. This is a testament to the power of both the Deadline Surge and auto-renewals being tacked onto the total. As you can see above, last year there were 1.7 million people auto-renewed, plus 1.43 million who actively renewed in the final week. CMS didn't break these numbers out this year (see the ??? cells above), but I'd imagine the split would be similar.

In the end, total HC.gov enrollment ended up only down 4.2% year over year after lagging behind by more than 11% until now. Also note that renewals ended up slightly ahead of last year (by 1,000 people). The entire shortfall came from new enrollees, which were down 15.4%, or around 368,000 people.

This is actually relatively good news from my perspective...because I had projected HC.gov to come in down roughly 570,000 people (4.9%). It's important to keep in mind the second bullet point above, however: The 8.82 million total will likely drop by perhaps 75,000 or so as cancellations/etc. are cleaned up. If so, that would bring HC.gov in at right around 8.38 million, which would still be roughly 4.2% behind last year's final total. Regardless this is pretty impressive all things considered.

I should note that technically speaking, 2019 HC.gov enrollment is actually only 3.3% behind last year's final number, not 4.2%...because 79K was subtracted from last year's total but hasn't been subtracted from this year. The final/official tally should come out next Wednesday.

OK, what about the state-level data? Here's how that compares year over year: 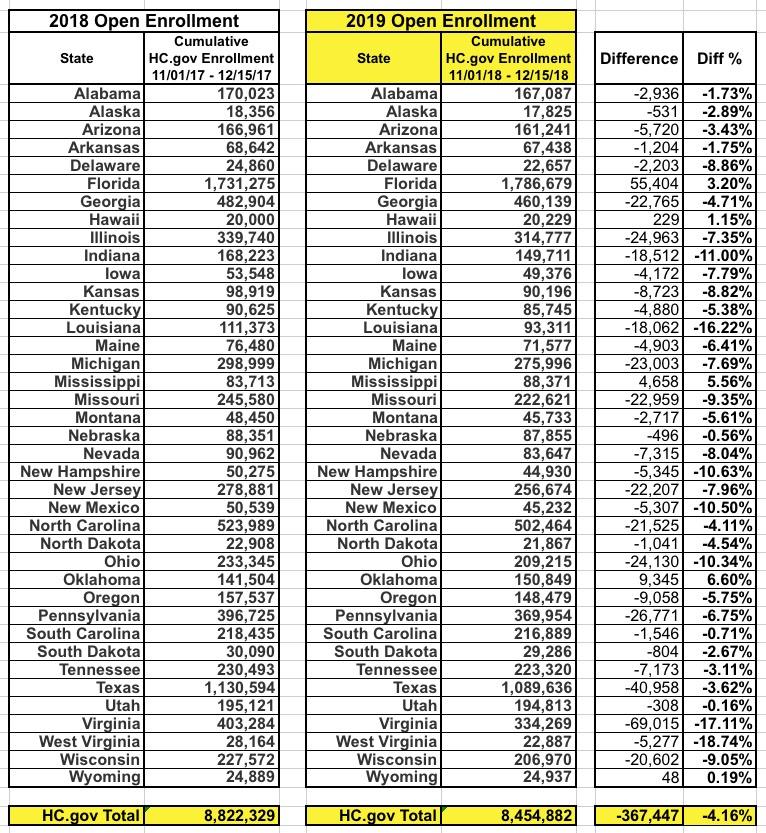 At the opposite end of the spectrum, West Virginia ended up coming in dead last, even below Virginia (which has a very good excuse: They expanded Medicaid this year, which means roughly 85,000 exchange enrollees are being shifted over to Medicaid instead...which in turn means that VA would've been slightly ahead of last year if they hadn't expanded Medicaid, although I'm not gonna complain about that!). 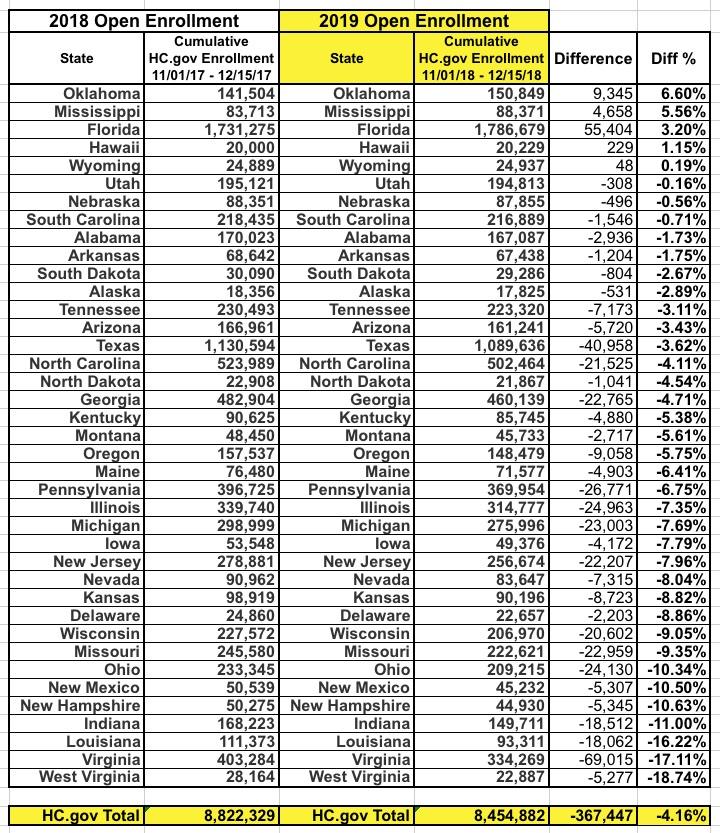