One more big reason to #GetCovered that no one ever talks about...

So, my wife and I finally got around to renewing our own ACA exchange plan the other day (yes, I'm realize how ironic it is that I've spent the past 41 days screaming at everyone else to #GetCovered while waiting until the last week to do so myself. We're a bit busy this month. Don't @ me.)

Anyway, we went through a lot of research and discussion (including assistance from fantastic folks who know more about this stuff than me like Louise Norris and David Anderson) about whether to stick with our existing Gold HMO (we have some pricey issues to deal with) or to switch to a Bronze HMO...but with a Health Savings Account.

I know very little about HSAs, but Dave and Louise suggested I look into one so we did. In our particular case, we decided to stick with the Gold plan in the end for reasons I'd rather not get into...but along the way, while researching our actual 2018 medical claims and expenses, I noticed something rather important. See if you can figure out what it is: 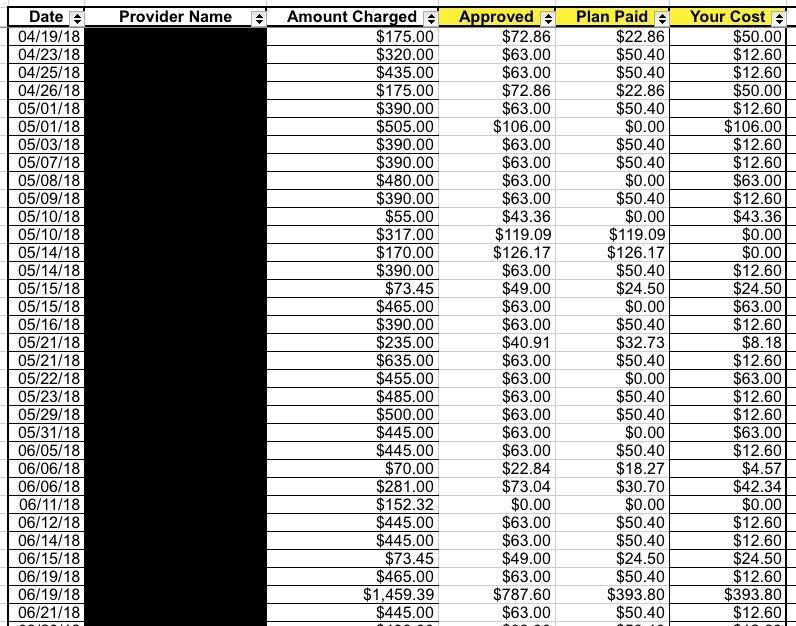 See the "Amount Charged" column? That's the amount that the doctor, clinic or hospital billed for the service in question (most of these are physical therapy sessions). All told, those added up to nearly $39,000 in claims for the year for my whole family, ouch!

However, notice the next column over ("Approved")...that's the amount that the insurance carrier actually authorized to be paid to the healthcare provider. Of that amount, the carrier usually paid about 80% (50% in some cases for medical equipment/etc), leaving my wife and I to pay the rest.

For the full year, here's what our family medical expenses looked like for 2018 (not including December, of course):

Here's the thing, though: The official "charge" for our family medical issues this year was nearly $39,000...but the doctors/hospitals had negotiated charges of less than $8,000, or just 20% of that...and that's before the carrier covers their ~72%.

Many people think that given how expensive heatlh insurance can be, they'd be better off just taking their chances and paying out of pocket for any medical services which come their way. And in some cases, that may work out alright.

In our case, for instance, we would have come out ahead this year financially if we had saved the amount we had to pay in premiums and instead paid that full $7,859 out of pocket...except that our bill wouldn't have come to $7,859...it would have been $38,683.

In fact, I'm pretty sure Norris had my own family situation on her mind when she posted these tweets which illustrate the point more simply:

4. And there's the often overlooked benefit of getting the insurer's negotiated rate. It's not uncommon to see an insurer chop bills down by as much as 75%. Without insurance, you're on your own to negotiate with the provider. With insurance, you only pay the approved amount.

5. So let's say you get a free bronze plan with a $7,000 deductible. And you end up needing surgery & the bill comes to $10,000. Yikes - are you going to have to pay your full $7,000 deductible?
Nope. You'll pay what the insurer approves—likely a fraction of the original bill.

To be clear, it is still pretty crazy that the full, uninsured prices for these services would come to nearly $40,000. And it's even more confusing and insane that the official "cost" of the exact same procedure can cost $1,500 at one hospital and $15,000 at another. Regardless, until the system is radically changed, this general situation is likely to remain the status quo...which is why it's a wise idea to #GetCovered even if your only viable option is a Bronze plan with a seemingly crazy-high deductible.

In addition, as I noted yesterday, even Bronze plans include a long list of FREE preventative services which aren't subject to the deductible no matter how high it is...as long as you have them performed by an in-network provider.

And, of course, every ACA plan includes a Maximum Out-of-Pocket (MOOP) total, beyond which the insurance carrier has to cover 100% of all expenses (again, as long as they're performed in-network). The MOOP amount seems crazy high as well (it's $7,900 for an individual or $15,800 for a family in 2019), but the idea there is to prevent personal bankruptcy due to a catastrophic medical bill. Non-ACA plans don't have either the mandatory preventative services or the ACA's MOOP limit.