Earlier this week, a picture of a letter sent to a patient needing a heart transplant recommending that they find a way to raise $10,000 to cover some costs went viral on Twitter and Facebook, with various celebrities, politicians etc. reposting it.

I'm sure you've seen it already, but just for the record, here's one of the most viral variants, from freshman Congresswoman-elect Alexandra Ocasio-Cortz. It's important to clarify that the letter was not sent by the insurance carrier, and the $10K in question would not be going to pay an insurance company...or, in fact, even "Spectrum Health" aka the "Heart & Lung Specialized Care Clinics" noted in the letterhead.

Insurance groups are recommending GoFundMe as official policy - where customers can die if they can’t raise the goal in time - but sure, single payer healthcare is unreasonable. 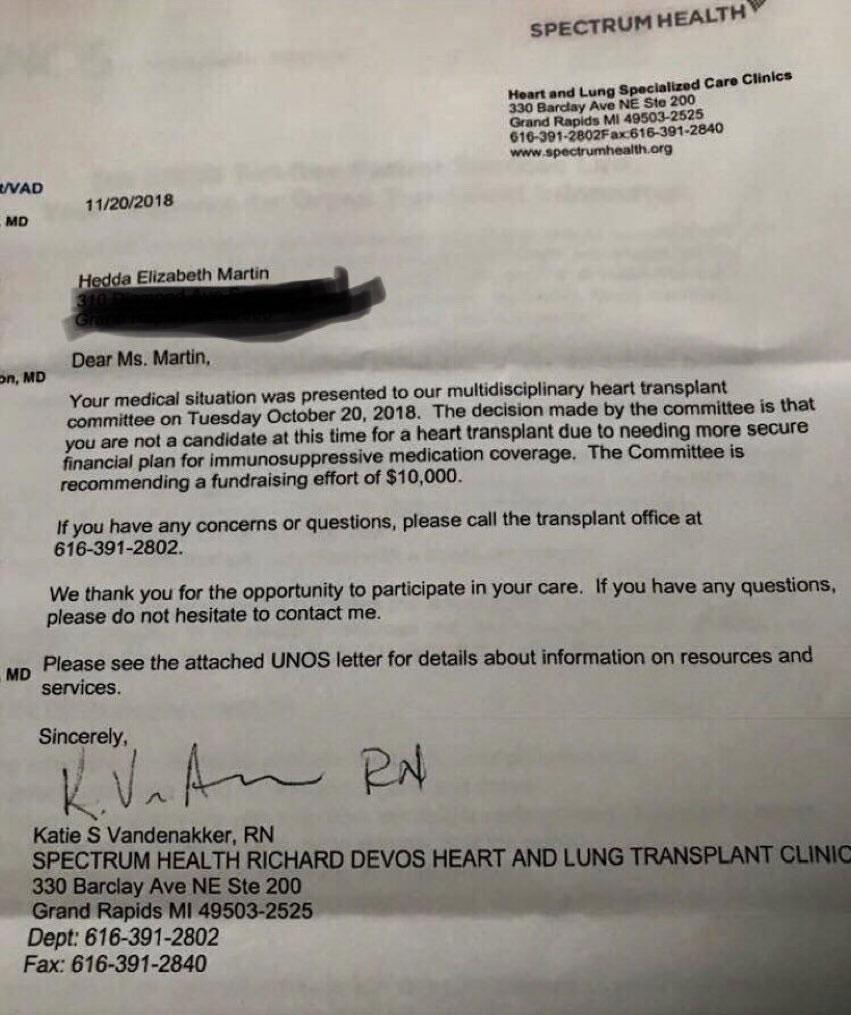 As I noted, the letter and the story behind it have since gone viral, with dozens of mainstream news articles about it. Much of the credit for getting the actual story behind this letter correct (and the picture it paints of the larger complexities of the U.S. healthcare system) belongs to Matthew Cortland, a self-described "writer, lawyer and public health nerd" who has various chronic medical problems. He wrote a lengthy thread correcting the misinformation about the letter and the transplant situation which itself has also gained a lot of attention.

This wasn’t an insurer, @Ocasio2018, the letter is from the transplant committee. And they're likely requiring a $10k reserve because of the significant out-of-pocket costs MEDICARE imposes on patients. https://t.co/OcW5q84Dvp

I'm not going to repost the full thread; it goes on for awhile, gets quite wonky at times and includes other screen shots of various documents/links etc. to explain his point. I highly recommend people read the whole thing, but there's no need for me to repost it again here.

However, this situation does raise one other point, which Miranda Wilgus (another healthcare advocate who also happens to be a friend of mine) recommended I write about: Crowdfunding for medical expenses and how it relates to the ACA.

While the above letter may involve a woman on Medicare, not an ACA individual market policy, the fact remains that many people on ACA exchange policies likely also utilize GoFundMe and other "Crowdsourcing" tools to raise money for their medical expenses even if they also receive ACA subsidies, which are very generous if you earn up to 200% of the Federal Poverty Line (around $24,000/yr for a single adult) but which drop off after that, especially when it comes to deductibles, co-pays and other out-of-pocket expenses.

It's important to keep in mind that not only are some* funds raised via GoFundMe accounts counted as taxable income*, that means they also may* count against your ACA subsidy eligibility. This may seem obvious to most people, but it's especially important for those who are facing the dreaded Subsidy Cliff.

*IMPORTANT UPDATE: Thanks to "Dawn" for calling my attention to this notice at GoFundMe's website which claims that donations are not considered taxable income:

Donations made to GoFundMe campaigns are usually considered to be "personal gifts" which, for the most part, aren’t taxed as income.

However, there may be particular case-specific instances where the income is in fact taxable (depending on amounts received, use of the funds, etc.), so we recommend that you maintain adequate records of donations received and consult a tax professional to be sure. GoFundMe will not report your donations as income at the end of the year, or issue any tax documents. Because everyone's situation is different and tax rules can change from time to time, we’re unable to give any tax advice.

For information about tax deductibility and Gift Aid for donors, please click here.

HOWEVER, there's also cases like this one which claim the exact opposite:

Casey Charf is confused, and upset, by the $19,000 tax bill she got from the IRS in connection with donations made via GoFundMe to cover her medical expenses.

In March 2013, Casey was in a major car crash. She survived those serious injuries, but in during treatment doctors also discovered she had several cancerous tumors. Casey's sister, Courtney, set up the online GoFundMe account "Caseys Cure" to raise money for the family's growing medical costs.

To date, the crowdsourcing effort has collected $50,000.

...The tax agency sent the Charfs a notice that the amount they’d collected through the GoFundMe account should have been claimed as income.

The article even references the GoFundMe statement, noting:

Of course, the key phrases are "everyone's situation is different" and "please consult with a tax professional." In that last bit of advice, you should do so before setting up a crowdfunding account so that it's clear to the IRS who's getting the money and for what purposes.

The Charfs are appealing the IRS tax bill. Several local tax professionals in the Omaha area believe they have a good case.

IN OTHER WORDS: IT MAY BE TAXABLE INCOME...OR IT MAY NOT.

For the rest of this blog post, I'll be operating on the assumption that funds raised via GoFundMe/etc. are indeed taxable both for purposes of income taxes as well as ACA tax credits.

As an aside, since I actually accept donations to support ACASignups.net via GoFundMe myself, I should also note that in my own case, I am not claiming to be a charity case. This website and my healthcare policy analysis/advocacy work is my livelihood, and I do treat any donations made via GoFundMe, PayPal, Patreon or otherwise as taxable income.

As a refresher: Under the ACA, if you enroll in an individual market healthcare policy through HealthCare.Gov, one of the other ACA exchanges or via an authorized 3rd-party Web Broker Entity (WBE) such as Health Sherpa or eHealth and your household income falls between 100 - 400% of the Federal Poverty Line (FPL), you may (and in most cases, will) be eligible for Advance Premium Tax Credits (APTC) to help pay your premiums. If your household income falls between 100 - 250% FPL, you likely also qualify for Cost Sharing Reduction (CSR) assistance as long as you enroll in a Silver policy. The exact cut-off in both instances may vary depending on your specific sitaution, however. For instance, in the tragic example I wrote about a few days ago of the young man in Minnesota, he didn't qualify even earning $40,000/year...in that particular case, $37,000 was around the cut-off point.

And that's exactly why I'm posting this reminder to those using GoFundMe/etc. to raise money for their healthcare expenses: Depending on your income, due to how the ACA subsidy formula works, the funds you raise could themselves cause you to lose money.

Here's why: Let's suppose you're a 50-year old single adult earning $45,000/year living in Oakland County, Michigan. Under the current ACA subsidy structure, you'd qualify for a subsidy of $85/month ($1,020/year). You decide to enroll in a bare-bones Bronze plan, which will only cost $229/month after the subsidy, with a $7,900 deductible (which is also your maximum out-of-pocket cost).

You get hit with some expensive ailment which is gonna max out your deductible, and while the $85/mo helps out and you're grateful that you won't have to pay any more than $7,900 no matter what (as long as you stay in network, that is...), you simply don't have the $7,900 either. You can swing around half of it, but after that you're tapped out.

So, you decide to plead your case on GoFundMe to raise, say, $4,000. People sympathize with your plight and you hit your $4K target. All is well, right?

You've hit...the Subsidy Cliff. That means you're gonna have to pay back the full $1,020 when you file your taxes the following year.

In this case, it was probably still worth it; assuming around 15% in normal federal/state income taxes, you're still around $2,400 ahead thanks to the GoFundMe income.

That's right...not only has the entire GoFundMe been wiped out, you're actually $452 in the hole.

There are three important lessons to draw from this:

1. Double-check with your accountant or other tax professional to see whether crowdsourced funds are taxable or not.

2. Regardless of income source, be wary of your income hitting the ACA's APTC income subsidy eligibility cap.