In week three of the 2019 Open Enrollment, 500,437 people selected plans using the HealthCare.gov platform. As in past years, enrollment weeks are measured Sunday through Saturday. Consequently, the cumulative totals reported in this snapshot reflect one fewer day than last year. 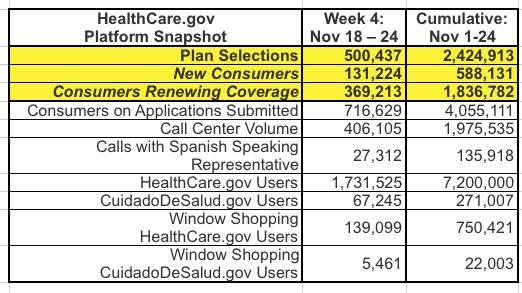 Adjusting for the 1-day difference however, HC.gov enrolled around 2.73 million people in the first 24 days last year, so the 2019 season is running around 11% cumulatively lower year over year for the first 24 days.

The reason the overall drop is still around 11% in spite of Week 4 being nearly the same is a matter of rounding (from just over 11% to just under).

So far, the limited data I have for state-based exchanges suggests that they're holding steady or actually have increased their enrollment numbers year over year, however. 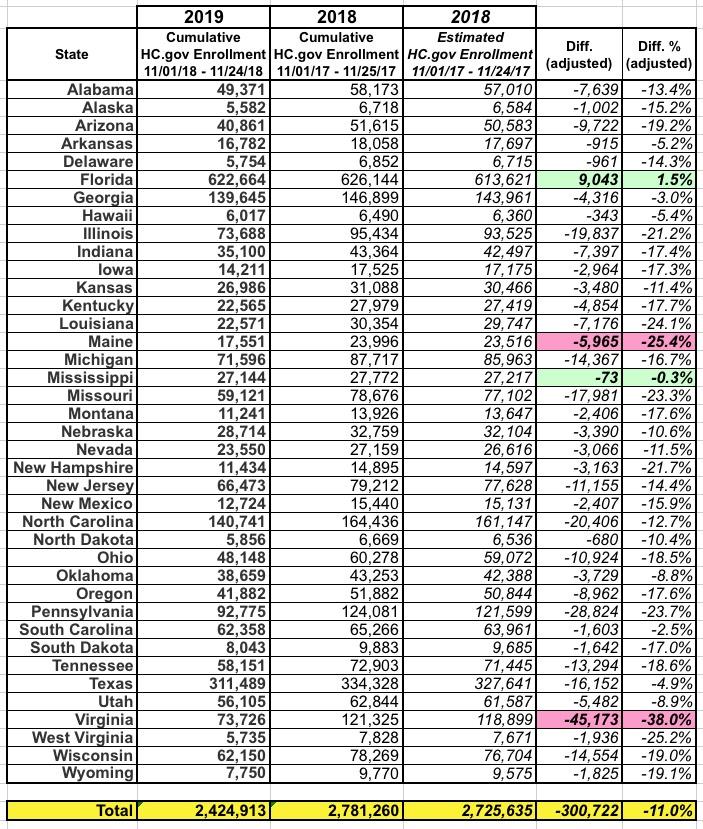 As you can see, Virginia and Maine continue to show the most dramatic drop-off (explained, again, by Medicaid expansion coming to both states), while Florida and Mississippi continue to perform the best relative to last year (although both are actually starting to fall off...Florida went from running 3.5% ahead to just 1.5%, whiile Mississippi went from being 1.2% ahead to slightly behind).

Louisiana, Illinois, Missouri, New Hampshire, Pennsylvania and West Virginia all continue to lag over 20% behind last year...and unlike Virginia and Maine, there doesn't appear to be any obvious reason why they're so far behind other states.

Ideology? LA, MO and WV are pretty red states these days...but Illinois is pretty blue, and NH and PA are purple.

Population? NH and WV are tiny, but IL and PA are large...and LA & MO are mid-sized.

Put another way, when you account for the missing day, renewals are only down around 9%..but new enrollees are down around 16.4% so far.

If you're looking for signs that the Trump Administration's massive slashing of both the marketing and navigator budgets for HealthCare.Gov are having a negative impact, it's that second number that I'd concentrate on.