As regular readers know, I've been a bit obsessive about tracking down and breaking out ACA Medicaid expansion enrollee numbers. This is more difficult than it sounds, because most Medicaid reports lump expansion enrollees in with the other ~58 million or so Medicaid enrollees; only a handful of states issue separate reports of the expansion-specific population on a regular basis.

Back in late November, I cobbled together the data as best as I could and came up with a total of roughly 11.3 million people nationally. However, that included a lot of 2-year old data and rough estimates.

A couple of weeks later, I stumbled upon a detailed analysis from an anti-ACA financial watchdog organization, the Foundation for Government Accountability, which provided hard numbers and confirmable data source links which included more recent numbers for many states. This brought the total up to over 12.3 million.

Then, in January, I learned of an important special situation in New York, where it turned out there were about 1.9 million more people who would lose coverage if/when ACA Medicaid expansion were to be repealed than I had previously thought. In short, 1.9 million people had already been added to Medicaid before the ACA was signed via a 10-year waiver agreement between the state and the federal government. An additional ~300K were added via the further expansion provided by the ACA. The original waiver then expired, but no one bothered to renew it since it had become redundant. That means if the ACA expansion is repealed, all ~2.2M of those folks get kicked off, not just 300K. This brought the total up to 14.2 million.

Of course, as time marches on, the population inches upwards and more people learn about their eligibility for the expansion program, the numbers will climb a bit more. I continued to update various states with more recent expansion enrollment numbers, and by February had the total expansion population pegged at just shy of 15 million people.

Since then, I've continued to check in on the 5 states (LA, MI, MN, PA & NH) which regularly post their expansion numbers. These didn't move the needle by more than a few tens of thousands of people...but then, a few weeks ago, Jeff Young of the Huffington Post wrote a detailed article which included relatively fresh numbers (from the past six months or so) across 12 others. Across all 17 states, the tally had increased by 235,000 people since the beginning of the year, for a new total of around 15.2 million.

That brings me to today. A few days ago, the Kaiser Family Foundation, which is about as reliable and trustworthy an outfit as you're likely to get on heatlhcare data, published a new piece which includes tables that also tally up the total number of Medicaid expansion enrollees by state. Their grand total comes in at "only" 14.4 million...but with an important caveat: All of their expansion data is as of "January - March 2016"...or anywhere from 15 - 18 months out of date.

Right off the bat I knew that KFF's tally was off by at least 420,000 people...because Louisiana didn't even expand Medicaid until last July. LA currently stands at around 428,000 expansion enrollees, so that brings their number up to at least 14.8 million, closing over half the discrepancy.

But look below to see what happened when I plugged in the more recent data side by side with KFF's Q1 2016 numbers. Due to the high churn rate on Medicaid (remember, enrollment can go up and down depending on a variety of factors including the local economy), in a few states such as Illinois, Iowa and New Hampshire, the number has decreased over the past year or so...but for the most part, they're considerably higher. I've included the net difference as well as the "as of" date in cases where I know of a difference. In some states (Delaware, Hawaii, etc) the KFF number from Q1 2016 is more recent than mine (or is more reliable, at least), so I'm sticking with their data.

Add it all up and it's a net increase of 1.18 million people vs. KFF's total...for a grand total of nearly 15.6 million. Considering that many of these numbers are still up to 6 months out of date, my guess is that as of today, June 19th, 2017, the actual grand total is likely higher yet...and may even have cracked 16 million by now. 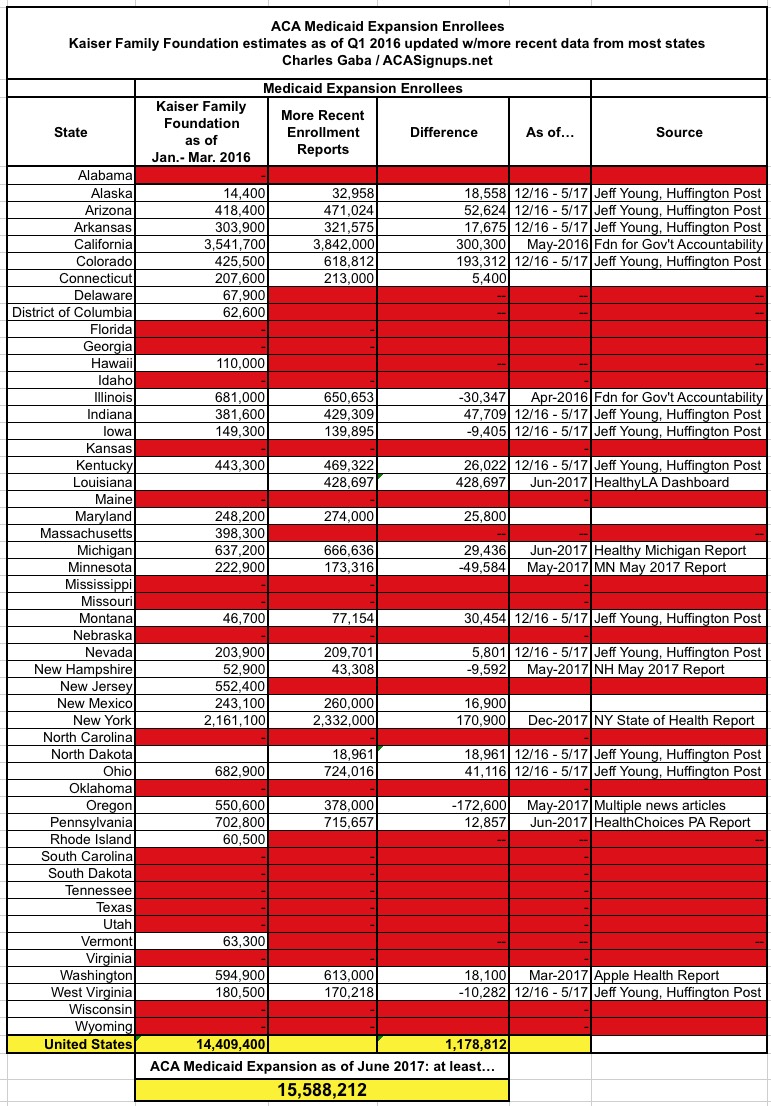