ASPE's "105% Increase" Report even more misleading than I thought...and raises another important point

The ASPE report made a simple claim: That average individual market premiums have more than doubled since ACA-compliant policies were launched in 2014. It plugged in the average individual market premiums for this year and compared them against the average indy market premiums for 2013 (the last year before all newly-enrolled policies had to be ACA compliant). It only included the 39 states maintained by the federal exchange, HealthCare.Gov, and concluded that on average, monthly premiums had increased from $224 in 2013 to $476 in 2017...a 105% increase over 4 years.

As I noted at the time, while this was likely to be fairly accurate when taken out of context, it didn't mean nearly as much as it appeared because:

The following day, I decided to tackle this third point, running a full analysis of the average APTC assistance provided to individual market enrollees in all 39 states covered by the ASPE report. Lo and behold, I confirmed that when you include APTC assistance in the 2017 premiums for half the individual market, instead of them jumping by 105%, they've actually only gone up around 22%: 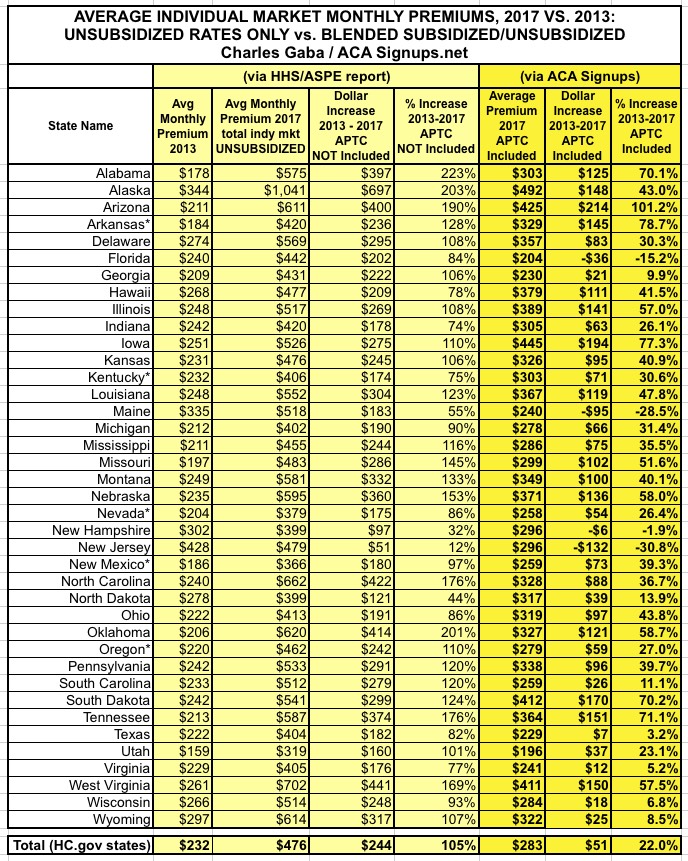 Now, it's important to note that since only half of individual market enrollees receive APTC, this doesn't do anything to make the other half feel any better; that's around 9 million people who are paying the full 105% average rate hike. However, this still does provide a more accurate picture of the situation.

However, there was one other thing which caught my eye: Notice that even before adding APTC into the mix, New Jersey only saw an average rate hike of 12%! Again, that's 4 years later...as noted above, simple inflation should've bumped NJ rates up by more than that! So what's going on in the Garden State?

Well, the most obvious anser is that New Jersey was one of a handful of states which already had Guaranteed Issue laws in place before the ACA regulations went into effect anyway. In fact, as you can see in the first column above, according to the ASPE report itself, New Jersey had the most expensive average individual market premiums of the 39 states included in the report.

Why? Because NJ carriers had to cover people with cancer, diabetes and so forth before the ACA required every state to do so...which meant much of the extra cost of doing so had already been baked into their prices to begin with....making the increase since then far less dramatic.

When you then add APTC assistance into the equation, of course, New Jersey indy market enrollees have actually seen, on average, a 31% drop in premiums (again, only half the enrollees actually receive subsidies). 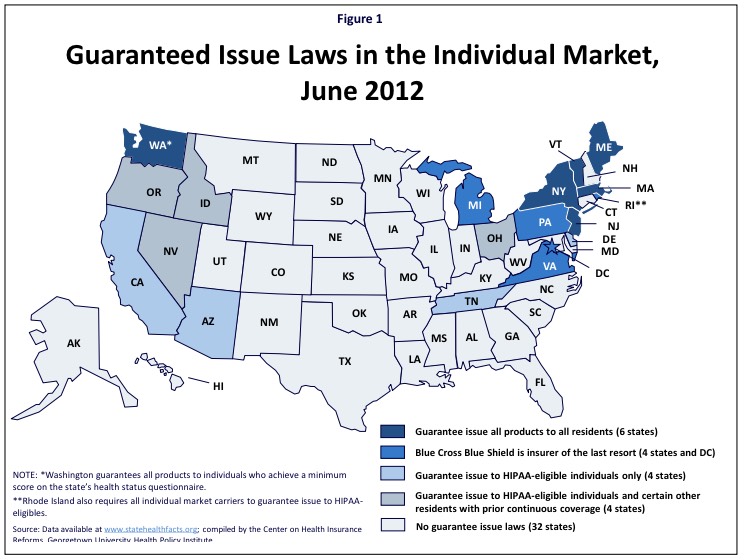 This is from the Kaiser Family Foundation, which goes on to explain that as of 2012:

There's a footnote which states "*Rhode Island also requires all individual market carriers to guarantee issue to HIPAA eligibles." This, combined with the Blue Cross "issue of last resort" policy, is why I'm including Rhode Island (along with Washington) in the "Guaranteed Issue" category.

OK, so we know New Jersey has seen a relatively modest (full price) average rate hike. What about ME, MA, NY, RI, VT and WA?

Massachusetts, New York, Rhode Island, Vermont and Washington State aren't listed in the ASPE report at all, because they each operate their own ACA exchange. Fortunately, I was able to dig up the 2013 data for 4 of them in another Kaiser Family Foundation analysis...and the 2017 data for these 4 states from the official CMS 2017 Open Enrollment Report, which includes partial data for all 50 states + DC. Washington State's data comes directly from the state exchange 2017 enrollment report.

Oh, yeah...and while I was at it, I was also able to fill in the missing data for Colorado, Connecticut, Idaho, Maryland and Minnesota! None of these were on the Guaranteed Issue list, but adding them still helps paint a more comprehensive national picture.

Unfortunately, I still haven't dug up the 2017 average premiums for California, DC or New York yet (although I have more on New York below).

OK, so what happens when I plug in the 9 more states, 4 of which already required carriers to cover pre-existing conditions for everyone (or nearly everyone)? This: 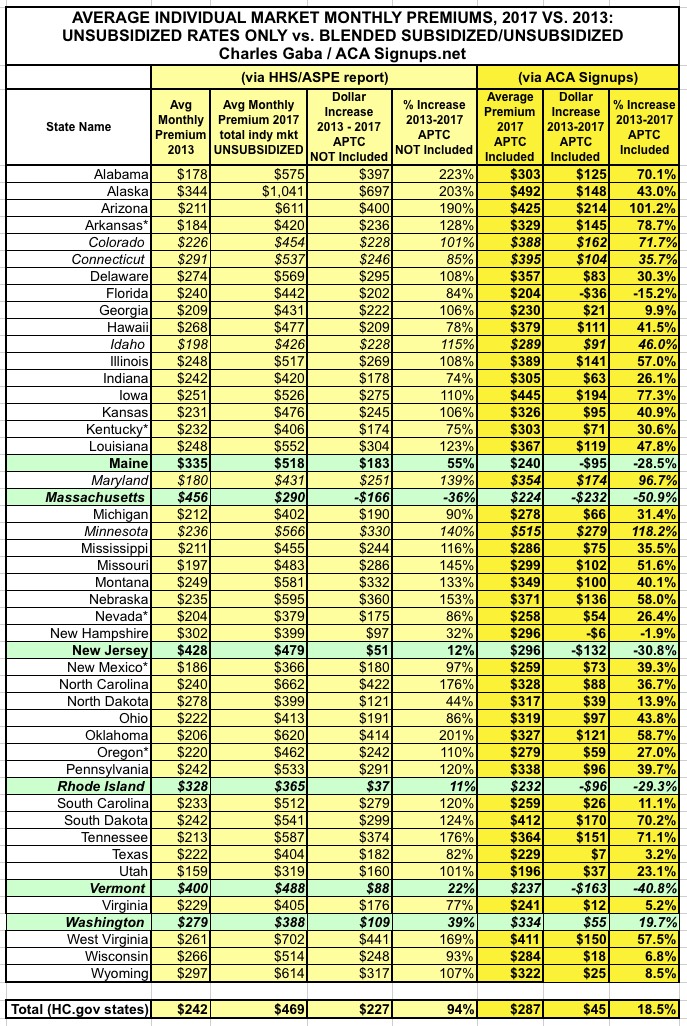 Secondly, the total average increase (including APTC assistance) has fallen from 22% to just 18.5%.

Finally, and most significantly: The green states are the ones which had full/near-full Guaranteed Issue policies in place as of 2013. Average full-price premium increases 4 years later?

Add them all up, and the average, unsubsidized rate hike for these 6 states has only gone up...3.6%. In 4 years. (I also removed Massachusetts just in case there's something glaringly wrong going on there, which brings the average up to 24.4%).

In short, once you adjust for the guaranteed issue factor, the "rate hike" talking point looks very different indeed.

I mentioned that I'm still missing data for California, DC and New York...and NY is the final state which mandated Guaranteed Issue prior to the ACA.

Well, guess what? Check out this article from July 2013:

The article is too vague to allow me to plug the numbers into the actual spreadsheet, but according to the KFF data, the average monthly premium in New York stood at $429/month in 2013. If we take "at least 50% lower on average", that means perhaps $215/month for 2014.

NY then raised rates by an average of 13% in 2015, 7.1% in 2016 and 16.6% this year. That should make their 2017 average around $304/month today...or still 29% lower than they were in 2013. And again, this is for unsubsidized premiums. There's still too much fuzziness here for me to feel comfortable plugging it into the spreadsheet, but this still underscores the larger point: You simply cannot properly compare two insurance premium numbers when one of them prevents carriers from cherry-picking/discriminating and the other one doesn't.

UPDATE: Thanks to Louise Norris for pointing out this press release from the NY State Dept. of Financial Services:

Over 350,000 New Yorkers are enrolled in an individual plan. DFS reduced insurers’ total weighted average increase requested for individuals from 19.3 percent to 16.6 percent. Rates for individuals are more than 55 percent lower than prior to the establishment of the NY State of Health in 2014, adjusting for inflation but not counting federal financial assistance that is available to many consumers purchasing insurance. Financial assistance through federal tax credits for those who qualify will also increase in 2017.

Wow. According to this inflation calculator, inflation from 2013 - 2017 totalled just 5%. If I'm understanding this correctly, average rates in NY are still only around half of what they were in 2013.

UPDATE: OK, I realize I'm getting a bit obsessive here, but a contact of mine at CoveredCA has provided me with the critical data needed to fill in California: 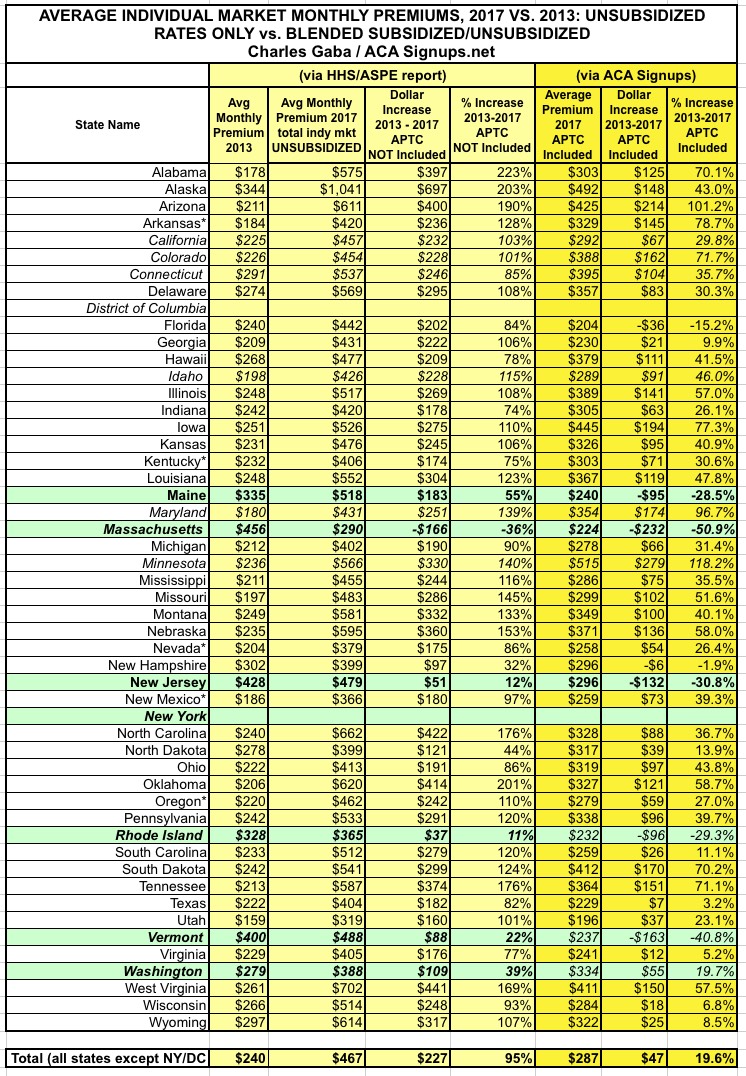 As you can see, even though California is huge (around 12% of the total market population), it doesn't really move the needle much because they're actually not far off from the national average (103% unsubsidized vs. 94% national; 30% w/APTC included vs. 18.5% natoinal). This bumped the national averages up just a bit, to 95% and 19.6% respectively.

Assuming New York's rates really are still considerably lower than they were in 2013, that should nudge the averages back down a smidge (DC's market is too small to even be a rounding error). 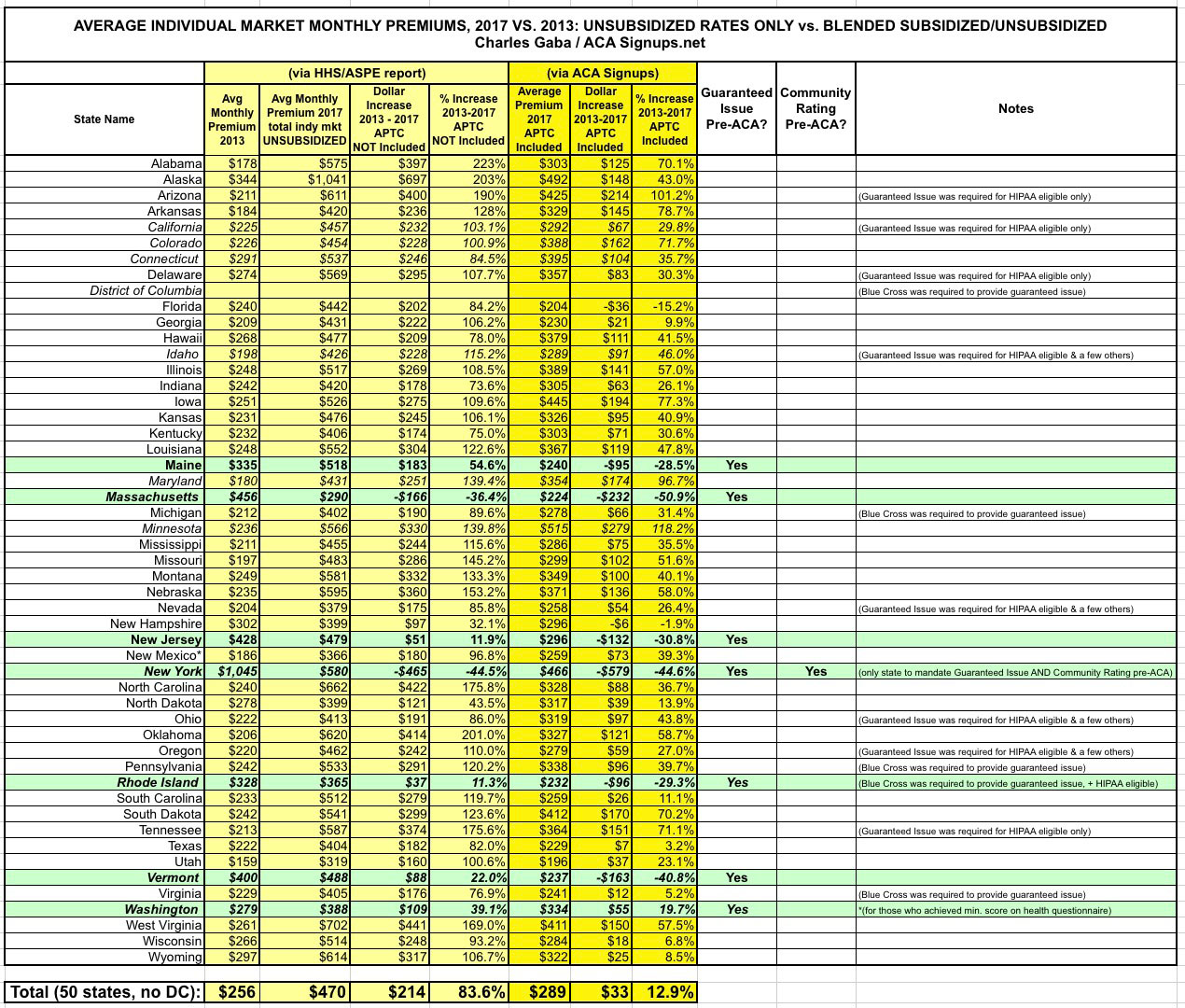