Insurers filed their initial rates with the Department in June. Since then, the Department engaged in its rate review process. As a result of the review, three out of the four insurers revised their rates down from their initial filings, with some double-digit decreases. The Department also held two public hearings during the rate review process, the first to allow the insurers to present their rate filings and the second to allow District residents to provide input.

“The Department of Insurance, Securities and Banking is committed to ensuring that District residents and small businesses are paying competitive prices for the plans that are offered through the District’s health insurance marketplace,” said DISB Commissioner Stephen C. Taylor. “The 2019 health plan rates have been rigorously reviewed by the Department, with input from policyholders and consumer advocates to be certain that all viewpoints were considered.”

The average increase in 2019 premiums across all health insurers is 13 percent for individuals and four percent for small group plans. Aetna, CareFirst BlueCross BlueShield, Kaiser Permanente and UnitedHealthcare—the same four major insurance companies as last year—will have plans on DC Health Link. CareFirst and Kaiser Permanente plans cover individuals, families and small businesses for the 2019 plan year. Aetna and UnitedHealthcare plans are only available in the small business market. Overall, 180 plans were filed, up from 177 last year. Small group plans increased by four to 155, and individual plans decreased from 26 to 25.

“The DC Health Benefit Exchange Authority (HBX) advocates for the lowest possible premiums for our DC Health Link customers and we thank Commissioner Taylor for considering our recommendations and for approving rate changes that are generally lower than initially proposed by insurers,” said Mila Kofman, J.D., Executive Director of HBX. We also applaud Commissioner Taylor for hosting public hearings for District residents and small businesses to provide comments on the impact of premium increases.”

DC Health Link’s open enrollment begins November 1 and runs through January 31, 2019. The Department is grateful to health insurers, the DC Health Benefit Exchange Authority, consumer health advocates, brokers and the public for their input during the rate review process.

The chart below shows changes in rates from the insurance companies’ original filings to the approved rates established by DISB’s rate review process. For more information about the approved 2019 health insurance plan rates, including the rate filings and sample rates, visit disb.dc.gov/2019rates.

Now, the enrollment period will extend out until January 31st as in the past, but I've been unable to determine whether or not the mandate reinstatement and/or short-term plan restrictions were actually implemented before or after the final, approved 2019 rates were locked in place. There's a whole lot of talk about carefully reviewing everything, etc. in the press release above...but no mention whatsover as to whether or not the short-term plan or mandate reinstatement changes were included.

If that 13.0% final average does include both changes, then that's in direct contrast to Kaiser's preliminary request in particular, which states that changes to the mandate would have a "significant impact" on their 2019 rate development. In fact, as you see above, Kaiser is the only one of the three individual market carriers which wasn't changed at all--they were approved for the same 20% rate hike they asked for in the first place.

I've put in a request for clarification, but until I hear back, I have no way of estimating what the actual #ACASabotage impact in DC actually is:

UPDATE: OK, after discussing further with Louise Norris and Dave Anderson, I've concluded that the final rates do include the impact of the mandate penalty being reinstated, and while the #ShortAssPlans restrictions have not been reinstated yet, it looks like the carriers expect them to have a nominal impact at most:

DC hasn't done anything yet about STLDI or AHPs. Councilmember Gray introduced a bill recently (they talked about it at the board meeting this week) that would impose limits, and they said it's likely to have a hearing in November. But for now, longer STLDI plans are being sold in DC. 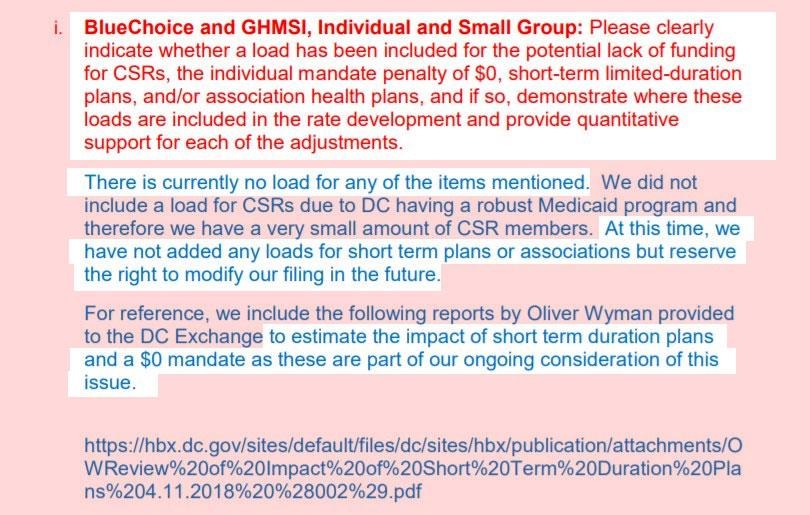 As a result, I've revised my spreadsheet slightly to reflect this: 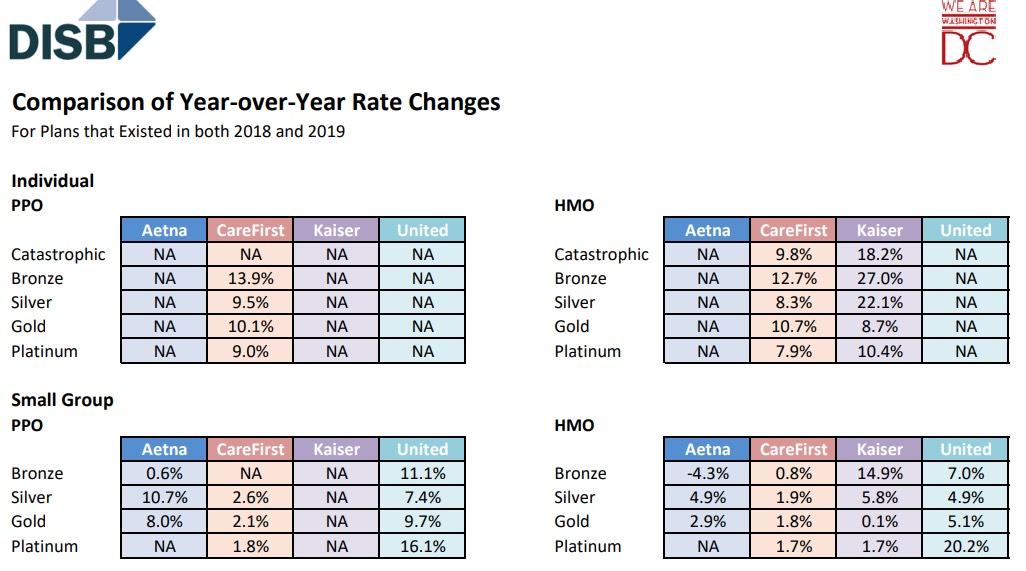