As I noted last month when I first analyzed the requested 2019 rates for North Dakota insurers, ND was somewhat unique last year in that it was one of only two states (the other was Vermont) which didn't tack on any extra premium increases for 2018 to account for the lost Cost Sharing Reduction reimbursement revenue after Donald Trump cut off those payments last October.

This led to one of North Dakota's three carriers, Medica, dropping off the ACA exchange altogether, though they still ended up enrolling a few hundred people directly via the off-exchange market.

This year, all the state insurance dept. is finally allowing the carriers to raise their rates to account for the lost CSR revenue, which has also convinced Medica to rejoin the exchange. As a result, in addition to the 13.8% rate increase I estimate is being caused by the combined effect of the ACA's individual mandate being repealed and the expansion of #ShortAssPlans, 2019 premiums are also going up an estimated 9% to cover the lost CSR revenue. Combined, that's an estimated 22.8 percentage point impact due specifically to #ACASabotage factors.

At the time, I estimated an average requested rate increase of around 7.4% with those factors vs. perhaps a 15.4% reduction without them.

Today, the ND DOI posted the approved 2019 rate changes, and while state regulators have lowered the rates for two of the three carriers, the sabotage factors are still baked in...and the way they present the numbers is a bit confusing:

The 2019 individual and small group market health insurance premium rates were also included in the study. The average rate increases based on market and company are outlined below: 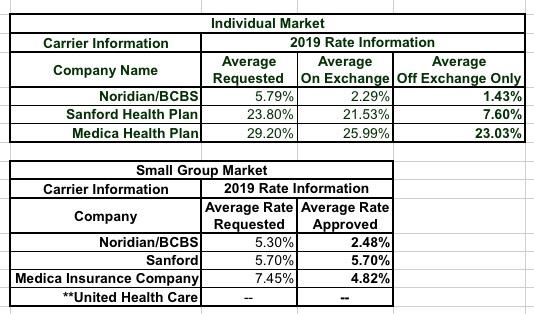 **United Health Care will be offering plans on the small group market starting in 2019, as this is their first year offering a plan in North Dakota, there is no rate increase requested.

However, for the Individual market, they oddly broke the approved averages out between ON and OFF exchange policies. This is a bit of a problem, especially for Sanford, where the difference between the two (21.5% vs. 7.6%) is so wide.

I don't know exactly what the on vs. off-exchange breakout in North Dakota is, but the total ACA-compliant market appears to be roughly 41,000 people...and according to CMS, they only had around 21,000 enrolled in on-exchange plans as of this past spring. That suggests roughly a 50/50 split between on- and off-exchange enrollment.

With that in mind, I simply split the difference for all three carriers and came up with a statewide approved estimated rate increase of around 3.2%...versus an estimated 19.6% rate drop if CSR, mandate and short-term/association plan sabotage weren't factors next year: