Maine’s application for a State Innovation Waiver under section 1332 of the PPACA seeks to waive section 1312(c)(1) of the PPACA, the requirement to consider all enrollees in a market to be part of a single risk pool, to the extent it would otherwise require excluding total expected state reinsurance payments when establishing the market wide index rate, in order to reinstate MGARA for 2019 through 2023. MGARA is an independent agency, and will operate a prospective, hybrid-model reinsurance program with components both of a traditional, attachment-point reinsurance program and a conditions-based reinsurance program. Specifically, MGARA will be a state-established reinsurance program that automatically cedes high-risk enrollees with one of eight conditions, includes voluntary ceding of other high-risk enrollees, and provides 90 percent coinsurance to attach for claims from $47,000 and up to $77,000, and 100 percent coinsurance for claims beyond that up to $1 million. For claims above $1 million, MGARA will cover the net dollar amount of claims not otherwise covered by Federal high-cost risk adjustment program.

As a result of the waiver approval, more consumers in Maine may have coverage, consumers will see lower premiums, and the state will receive pass-through funding to help offset a substantial portion of state costs for the state-established reinsurance program. Maine projects that under the 1332 waiver, premiums will be about 9% lower in 2019 than they would be without the waiver. In addition, Maine predicts that the number of uninsured persons will fall by about 1.7% due to the lower cost of healthcare through stabilization of the individual market. These projections were certified by independent actuaries and reviewed by the Departments.

IMPORTANT: While the the actuarial analysis projects a 9% average premium drop thanks to the MGARA program, the carriers themselves have already chimed in and say that it will only lower their 2019 rates by around 3.4 percentage points. Until I hear otherwise from the carriers or the state insurance department, I'll assume a 3.4 point impact.

UPDATE: OK, I've already heard otherwise. Apparently the carriers revised/resubmitted their filings since I ran my earlier analysis, because according to the official state insurance dept. filing summary, the average 2019 rate filings have changed quite a bit with and without the MGARA program in place:

With those numbers, the average increase drops quite dramatically even before reinsurance is factored in...and once it is, the average drops to a mere 1.0% overall increase statewide.

However, that ~10% #MandateRepeal/#ShortAssPlans sabotage factor is still baked in as well, which means if you removed those from the equation, unsubsidized Maine residents would likely be looking at around a 9% premium drop:

As an aside, I should also note that there's still a small chance of that 1.0% increase dropping a point or two more if Maine's Medicaid expansion program is actually implemented before the end of 2018 (which is becoming increasingly unlikely, I'm afraid).

(For the record, here's the revised Small Group filings for Maine as well):

Because MGARA will lower premiums, the second lowest cost silver plan premium is reduced, resulting in the Federal government spending less in premium tax credits. As such, the state shall receive passthrough funding based on the amount of premium tax credits that would have been provided to 1 The risk adjustment high-cost risk pool was effective starting for plan year 2018, and will reimburse 60% of claims above $1 million, with no cap. Mainers absent the waiver, but will not be provided under the waiver, while considering all Federal revenue. As required by Federal law, Maine’s 1332 waiver will not increase the Federal deficit. The Departments have determined that Maine’s application for a State Innovation Waiver under section 1332 of the PPACA meets the requirements outlined in Section 1332(b)(1) of the ACA and related guidance. Specifically, the waiver is projected:

Section 1332 of the PPACA permits a state to apply for a State Innovation Waiver to pursue innovative strategies for providing their residents with access to high quality, affordable health insurance. The Departments are promoting these waivers to give states the opportunity to develop strategies that best suit their individual needs. Through innovative thinking, tailored to specific state circumstances, states can lower premiums for consumers, improve market stability, and increase consumer choice.

State Innovation Waivers allow states to implement innovative ways to provide access to quality health care that is at least as comprehensive and affordable as would be provided absent the waiver, provides coverage to a comparable number of residents of the state as would be provided coverage absent a waiver, and does not increase the Federal deficit. State Innovation Waivers are available beginning January 1, 2017.

UPDATE 9/20/18: OK, the rates listed above have been approved by the state insurance dept:

"These rates are the final rates approved by the Maine Bureau of Insurance." 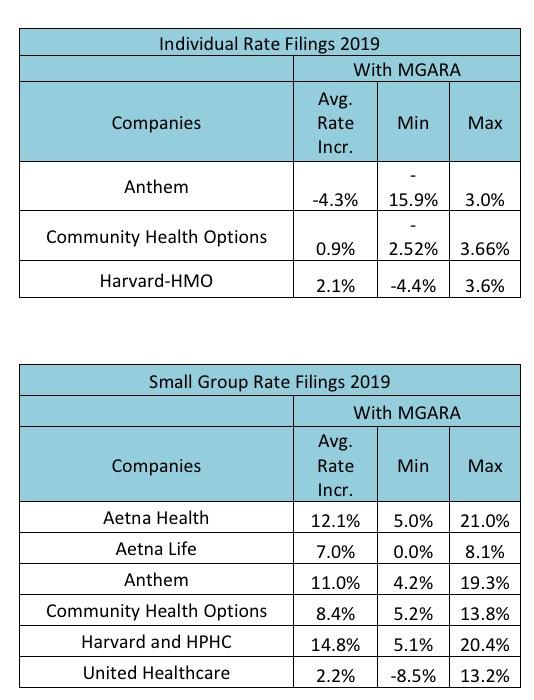 Unsubsidized Maine enrollees are paying $710/month on average this year, so we're talking about roughly a $71/month #ACASabotage factor, or around $850 total next year.