Risk Adjustment Transfer Payment Freeze: How much heartburn is YOUR insurance carrier experiencing this morning?

Over the weekend, CMS dropped a big bombshell on everyone: In response to a federal judge siding with a small insurance carrier in New Mexico in a lawsuit over the formula for the ACA's Risk Adjustment (RA) formula, the Trump Administration has decided not to transfer any RA funds for the 2017 calendar year to anyone until...well, I'm not sure exactly, but for the foreseeable future.

Pretty much expert on how the RA program (and the law) has indicated that this is completely unnecessary; there's several responses at CMS's disposal which wouldn't require throwing the entire industry into a panic (yet again). Regardless, this is where we're at.

So, about an hour ago, CMS released the actual 2017 RA report itself, which lists (among other interesting info), exactly how much money insurance carriers in every state owe or are owed from last year. There are three categories: The Individual Market (Bronze, Silver, Gold & Platinum); the Catastrophic Individual Market; and the Small Group Market. the total amount of money involved is around $10.4 billion ($5.2 billion owed by carriers, $5.2 billion owd to carriers).

Of the total, around $7.5 billion of it is on the individual market and $2.9 billion in the small group market, leaving just $42 million is on the Catastrophic market (which makes sense since there are very few people enrolled in Catastrophic plans anyway).

For carriers which owe money into the RA program, it's important to understand that while they're "winners" in the sense that they don't have to pay that money in yet, there's a good chance that they're going to have to do so sooner or later (weeks? months? years?), so they still have to set those funds aside for now somewhere. At the same time, the carriers which are owed money probably will be paid eventually...but again, no one knows how long that might be.

Large carriers can absorb the loss of cash flow for awhile, but smaller or less liquid carriers could be in deep trouble, just as they were after the Risk Corridor Massacre a few years back. In that case, only a tiny percent of the money was ever paid out and the carriers lost their lawsuit over the matter anyway. Even if they had won, it would've been too late for a dozen or so small carriers which went belly-up in the interim (the money would have gone to their creditors instead).

With all that in mind, here's the full list of (temporary) Winners and (hopefully short-term only) Losers in every state. CMS also provided a link to a downloadable Excel version.

I've added another column which adds up the three categories so you can see the net total for each carrier. The negative numbers (in red) mean that insurance carrier owes that amount. The positive numbers (in green) mean the carrier is owed that amount. In other words, the green cells are the ones which are at risk of being stiffed (at least temporarily).

NOTE: Massachusetts and Vermont are separated out because those states have merged Individual and Small Group risk pools:

Actually, Vermont is a perfect case study in explaining how the risk adjustment program is supposed to work (but for the moment, isn't). There's only two carriers in the state (Blue Cross and MVP), which makes it easy.

Basically, in 2017, the RA formula determined that MVP ended up enrolling a bunch of healthy people, while Blue Cross got "stuck" with a bunch of sick people. Since this (theoretically) was pure luck of the draw and had nothing to do with how MVP or Blue Cross conducts their business, MVP has to pay a chunk of their revenue ($5.7 million) out to Blue Cross. This year, it's entirely possible that their roles will be reversed--perhaps Blue Cross will end up with healthier people and have to pay a few million bucks back to MVP, and so on.

In this way, neither MVP nor Blue Cross have an incentive to try and only enroll healthy people or to try and discourage sick people from signing up, since it'll all come out even in the end anyway. The ACA prohibits them from the easiest way of doing this (medical underwriting...i.e., asking a bunch of nosey questions about every enrollee's medical history/etc), but there are all sorts of other ways of doing so indirectly (like only advertising on TV shows or websites that attract a younger audience, for instance).

The just-announced RA transfer payment freeze means that MVP gets to keep that $5.7 million...for now. They still have to tuck it away somewhere since they'll probably have to pay up at some point. Meanwhile, Blue Cross has to sit tight and wait longer to get their $5.7 million. If it's only a few weeks, that's no big deal. If it drags out to months or even years, that could be a real problem, depending on how much cash they have on hand. If they have $100 million in the bank, it's a minor annoyance, but if they only have, say, $25 million, that could really put a strain on their resources.

Anyway, here's the rest of the states: 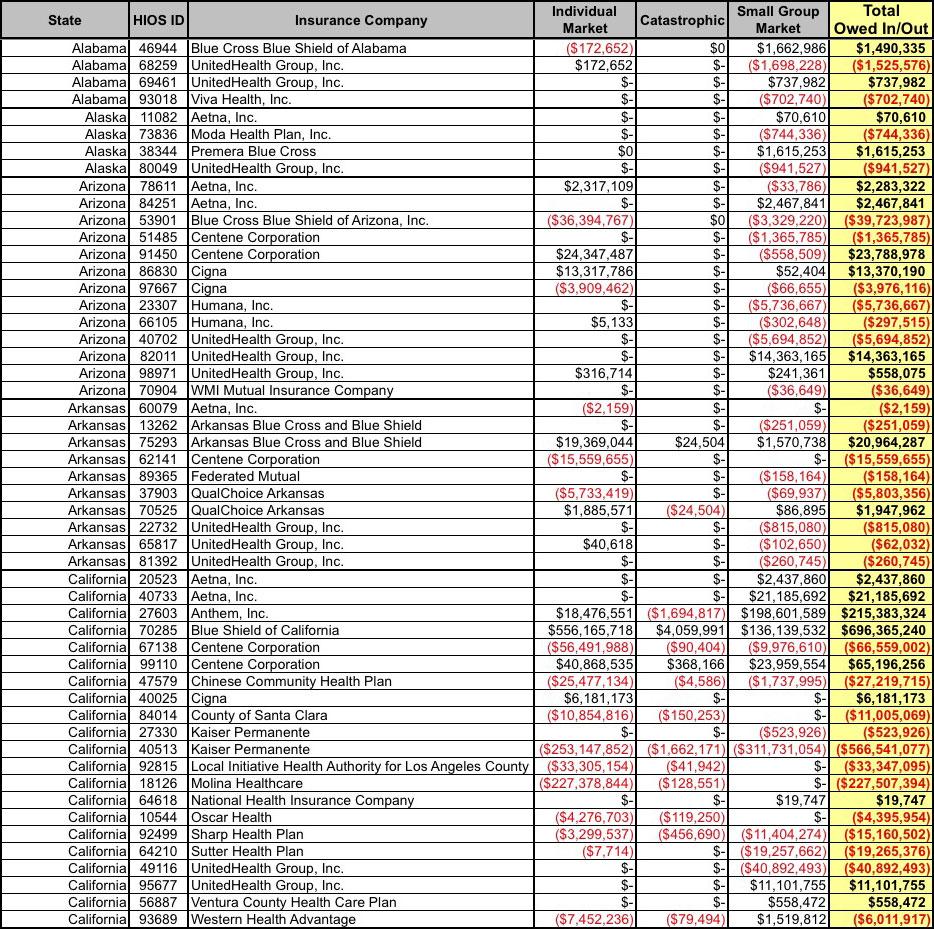 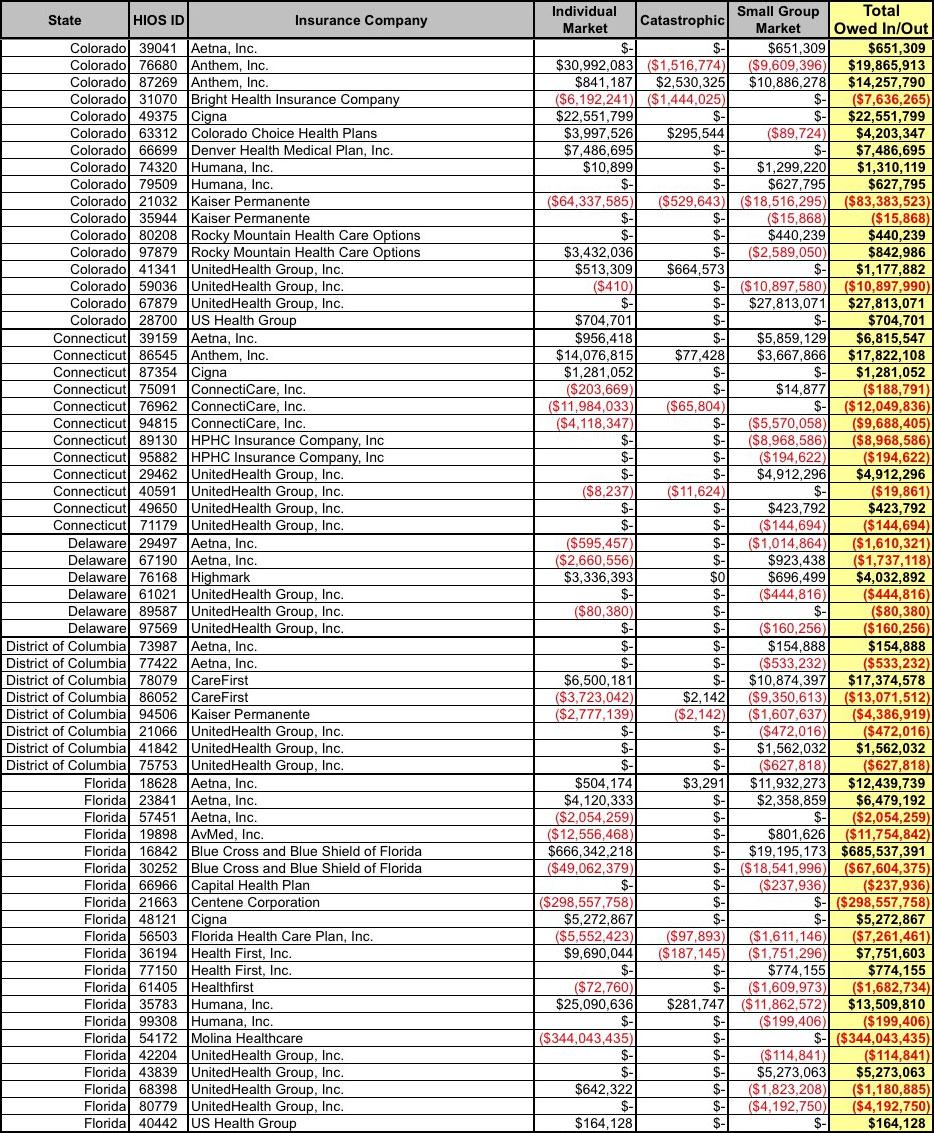 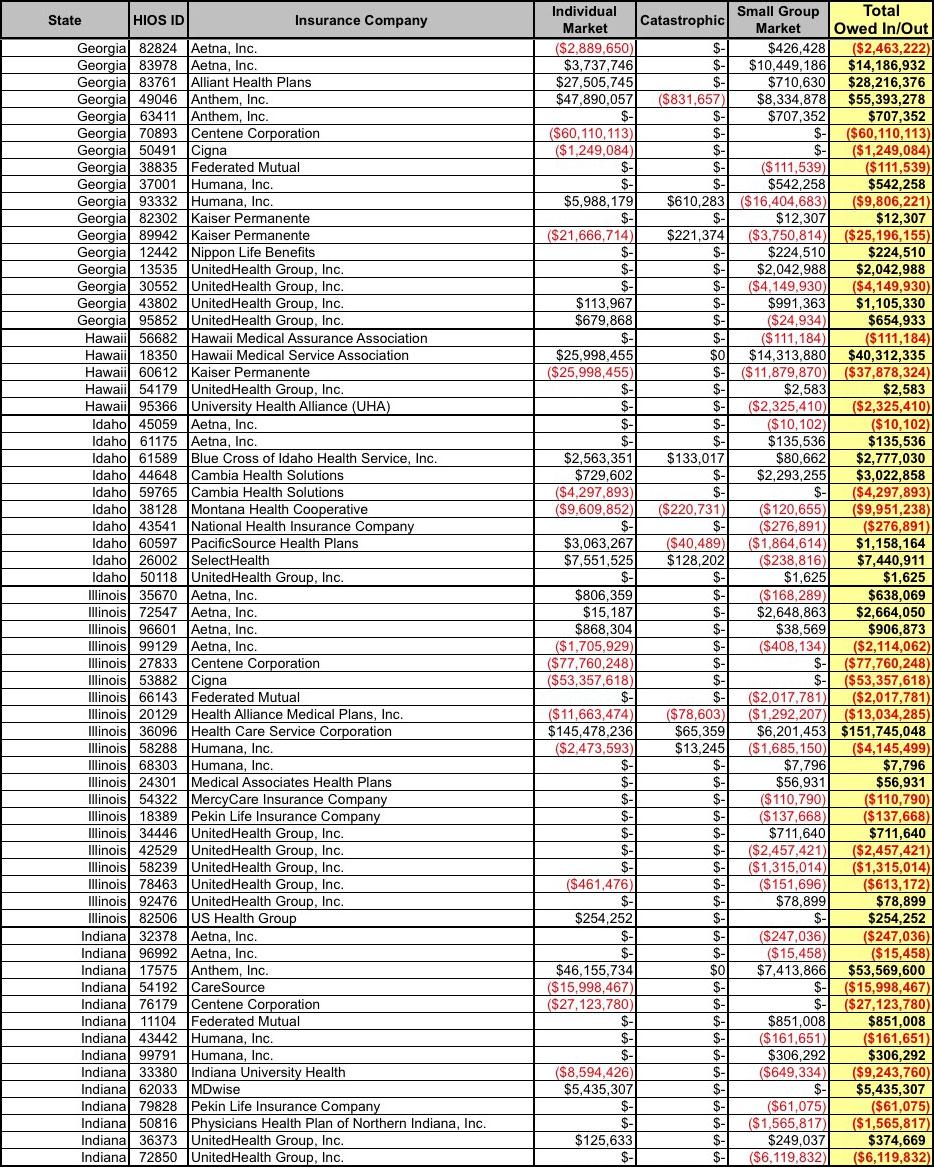 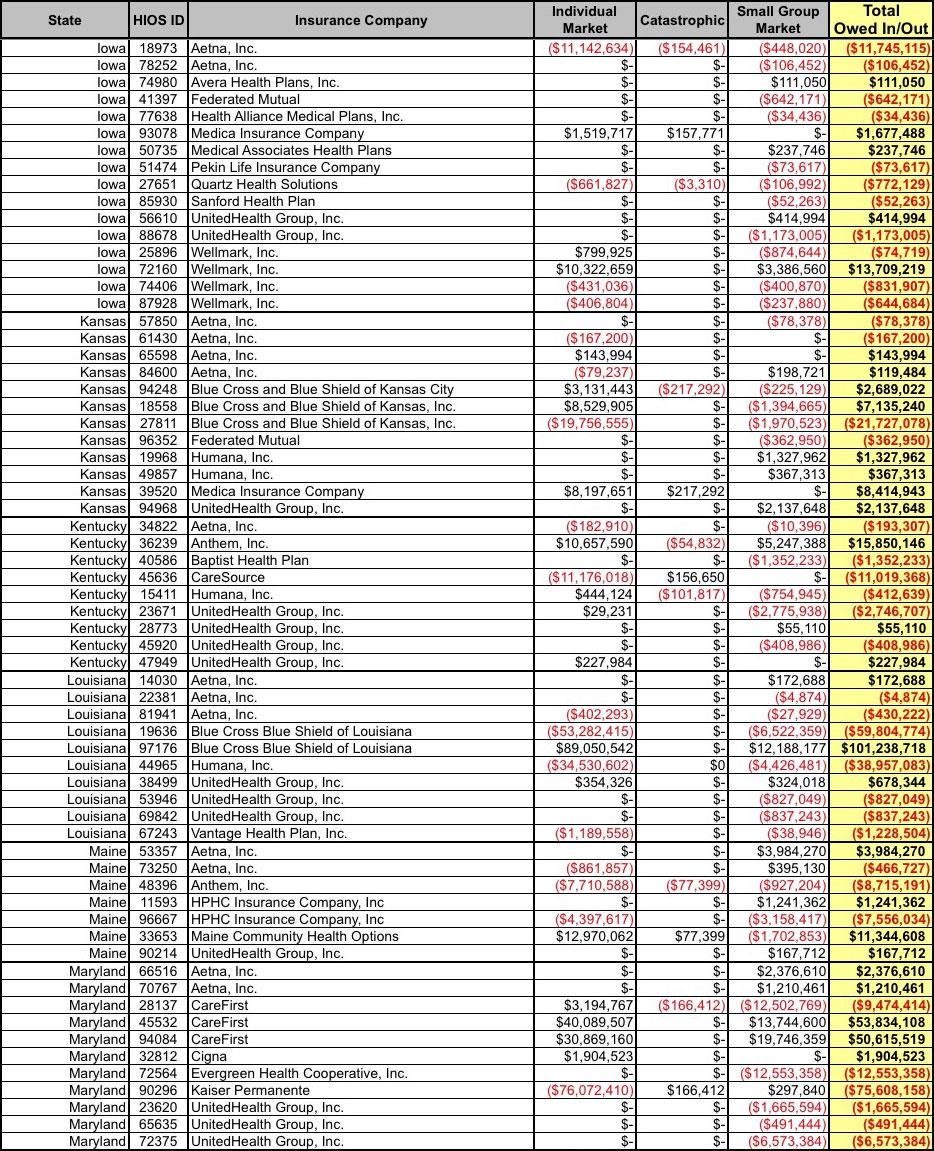 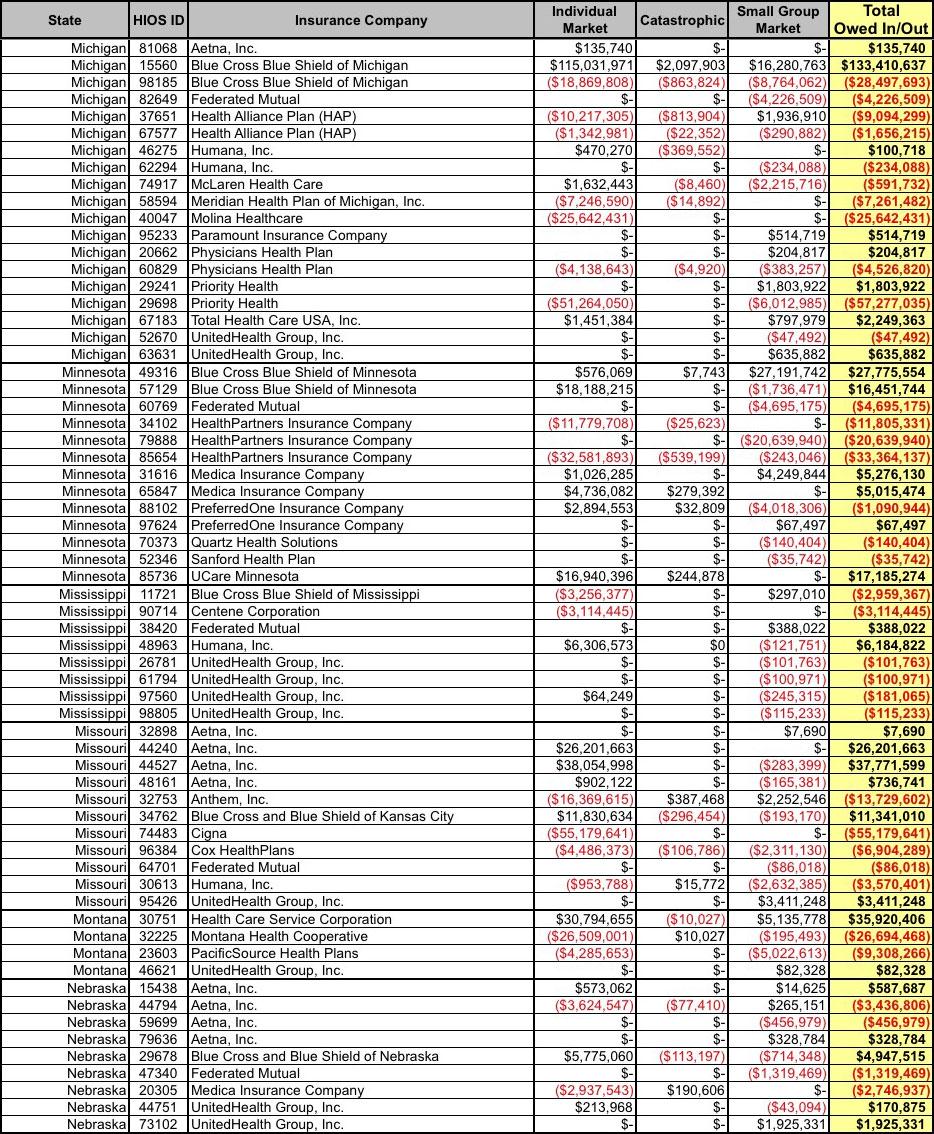 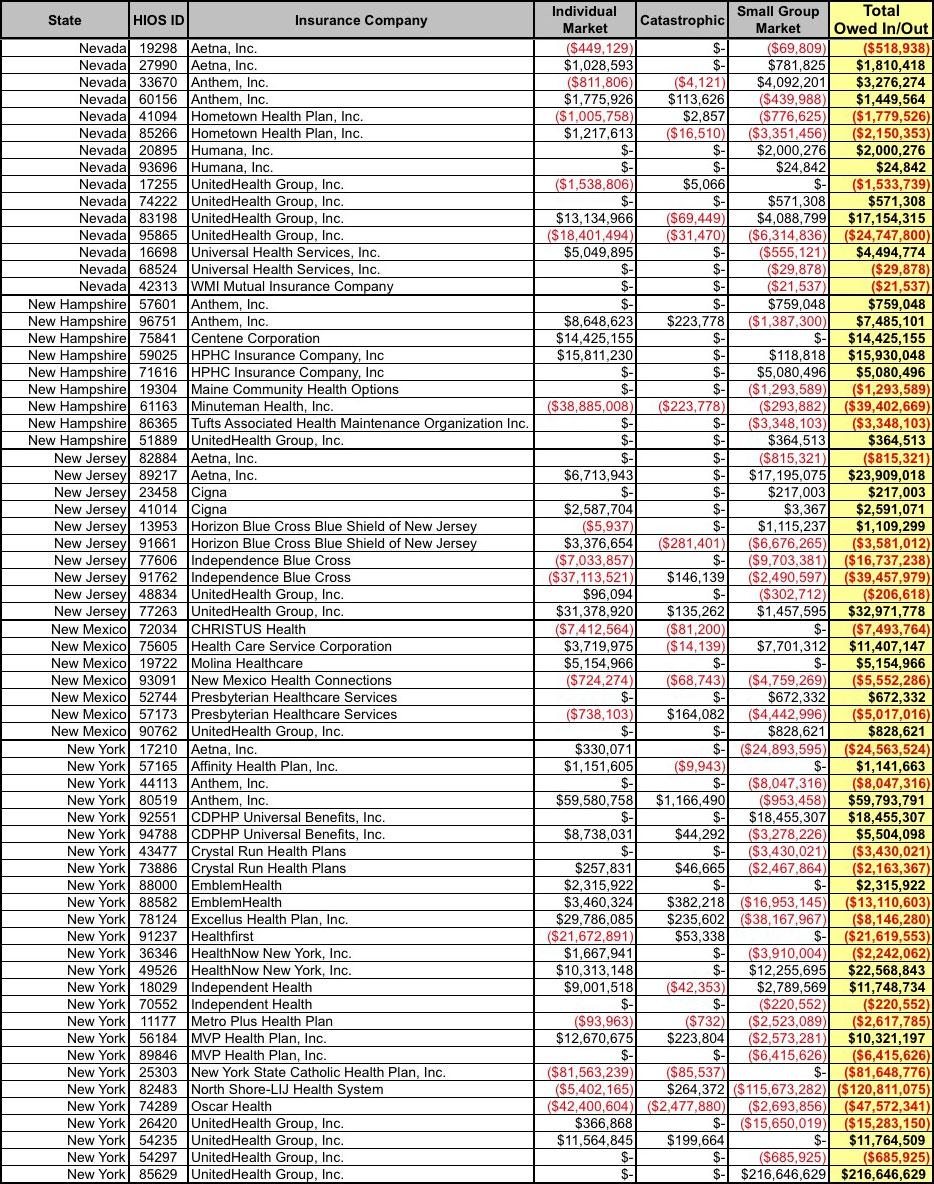 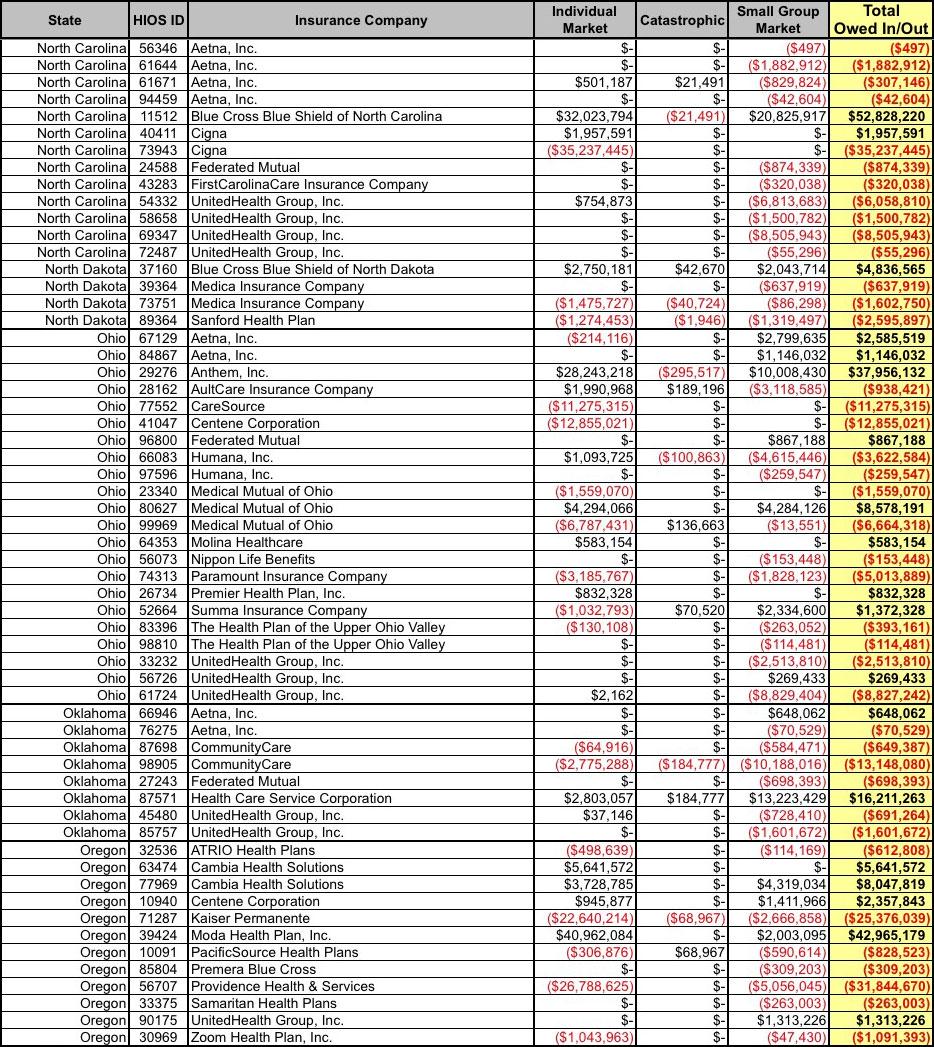 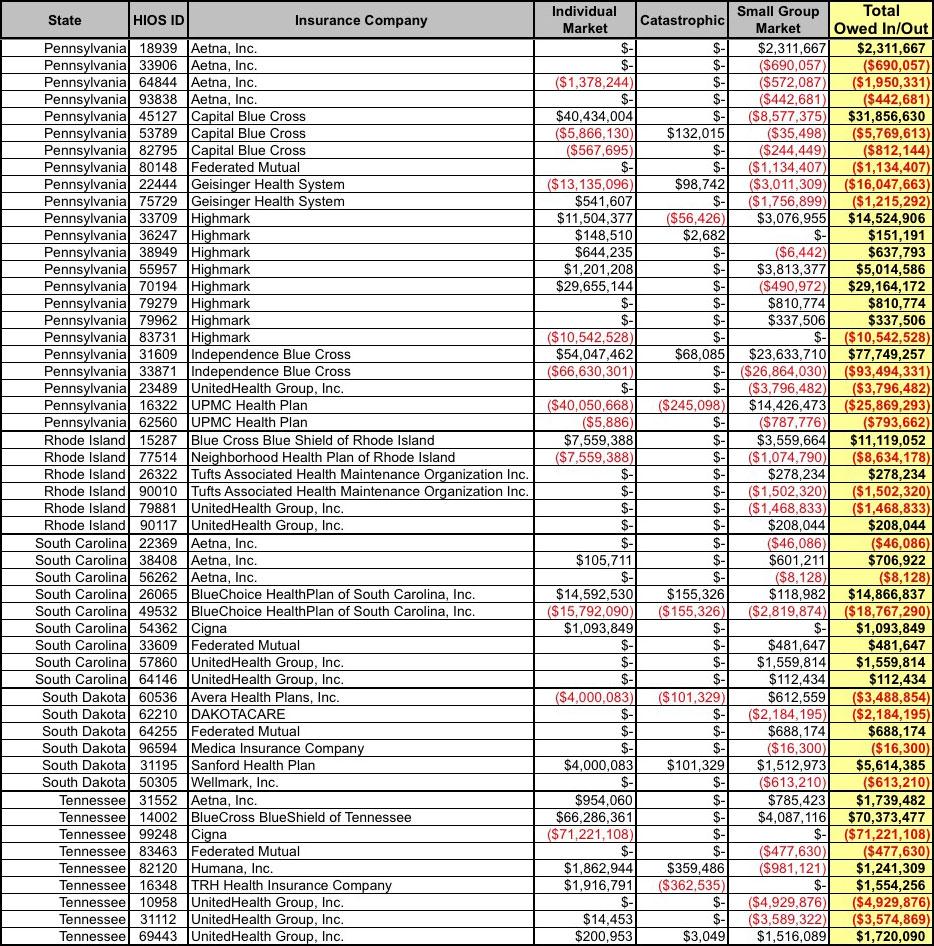 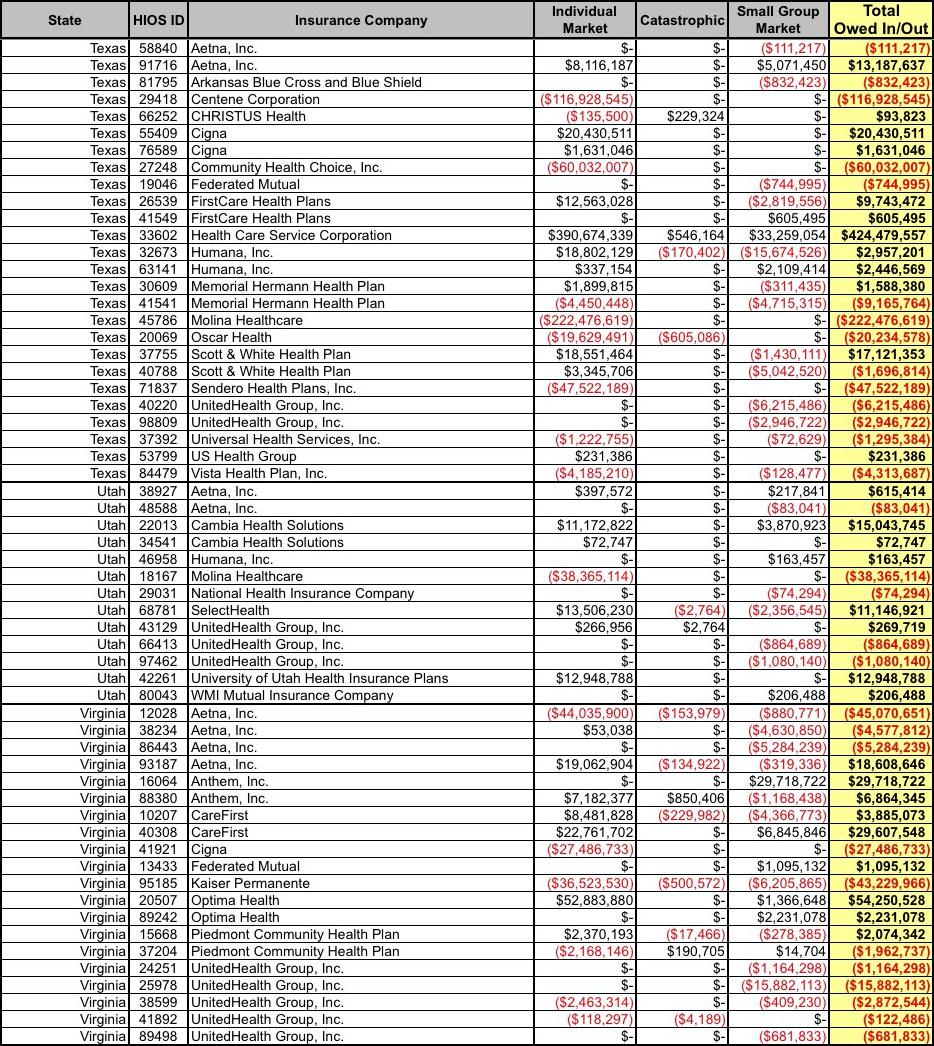 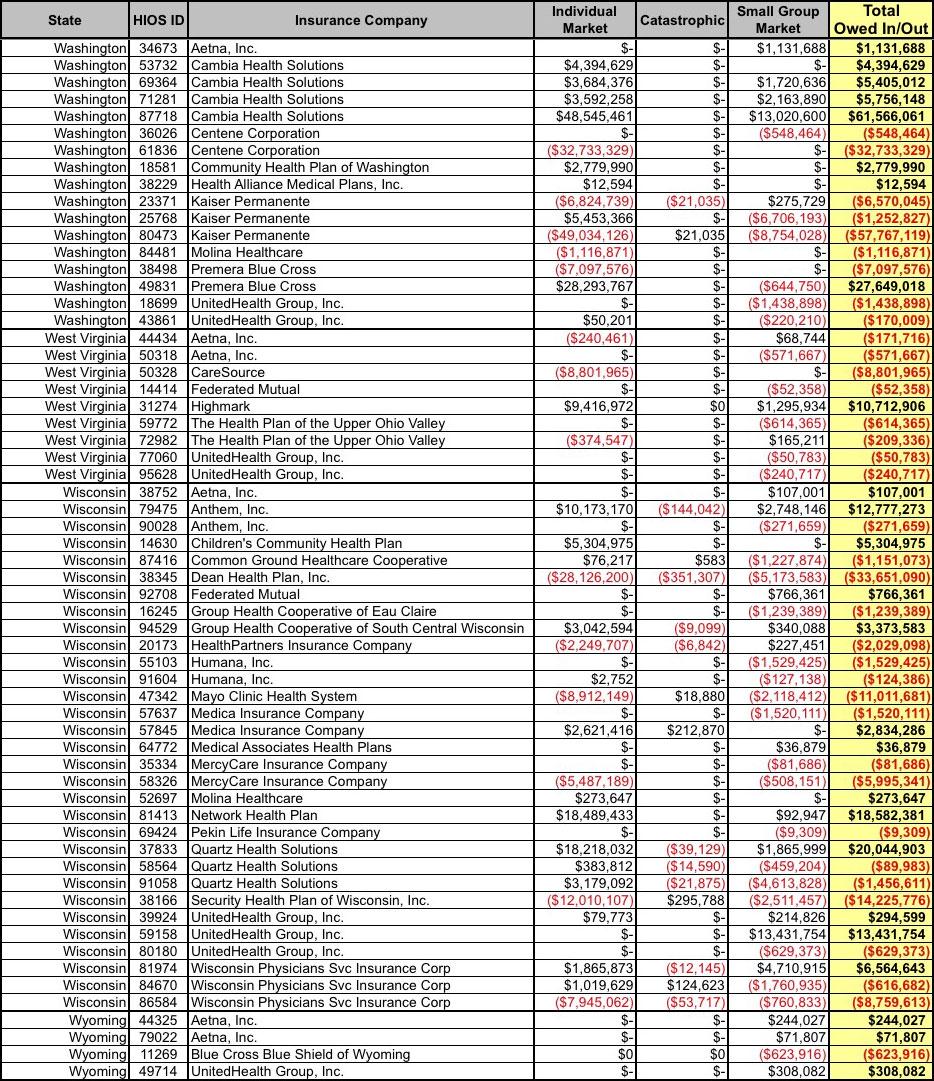