UPDATE 4/17/17: The numbers below have been updated to reflect the CBO's latest Federal Subsidy Baseline report.

Given the massive backlash/debate going on over the impending (supposed) repeal of the Affordable Care Act, there seems to be one particular fact which a huge number of Obamacare opponents (and even many supporters of the law) don't seem to be aware of.

One of the big talking points among ACA opponents is "Why should my hard-earned tax dollars go to subsidize someone else's lazy ass?"

Now, aside from the fact that a) "being self-employed" or b) "happening to have a job which doesn't offer health benefits" or c) "being married to/a child of either a) or b)" hardly makes one "lazy", there's something which these folks should know: 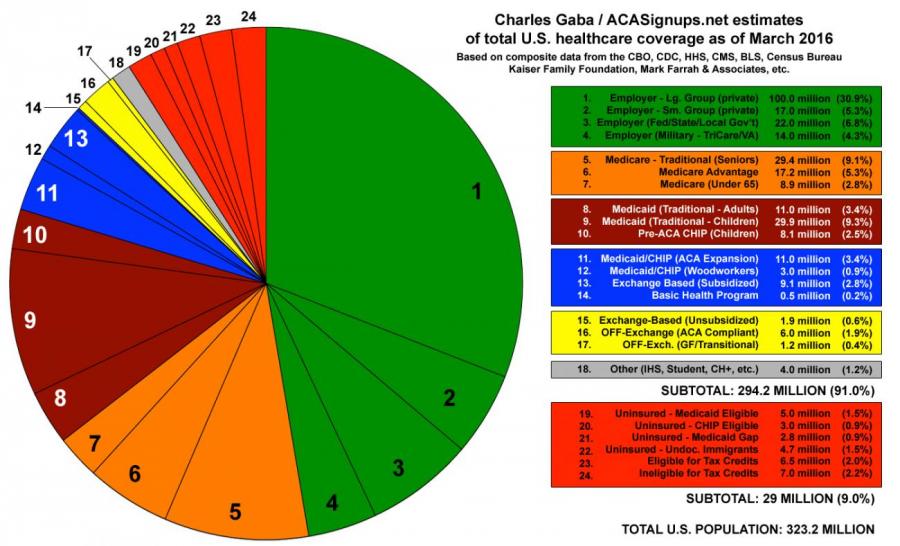 Most people know that the Orange (Medicare), Burgundy (Medicaid) and, over the past few years, Blue (ACA exchange/Medicaid expansion) enrollees are taxpayer subsidized.

Most people also know that the Yellow section is not taxpayer subsidized (unsubsidized individual market...around 9-10 million people, or ~3% of the total population).

What many don't seem to be aware of is that the entire GREEN section is also subsidized by the federal government...and therefore by taxpayers:

U.S. taxpayers will fork over $660 billion this year to subsidize health insurance for people under 65, the vast majority of whom have coverage through their employers, the Congressional Budget Office said on Thursday.

In its most comprehensive report on the cost of subsidized health coverage, a potential target for deficit reduction, CBO said the 2016 tax bill equals 3.6 percent of gross domestic product and includes the federal tax exclusion for employer-sponsored insurance, Medicaid programs for the poor and tax credits available to lower-income Americans through the healthcare law known as Obamacare.

The report did not include the federal cost of health insurance for people 65 and older. [ie, most Medicare enrollees]

Federal healthcare spending, especially for Medicaid and the Medicare program for the elderly and disabled, plays a perennial role in congressional debate about reducing the deficit. Some lawmakers and policymakers have also suggested taxing employer health plans that are currently excluded from federal taxation.

CBO estimated that $268 billion, or about 40 percent of this year’s subsidies for health coverage, reflects tax breaks for small employers and the exclusion for employer-based health insurance plans that cover 155 million workers under 65 years of age.

Yes, that's right: If you receive your healthcare policy from your employer, you're receiving an average of around $1,730 per year in tax subsidies, or around $144 per month.

Of course, this varies widely depending on the employer, the insurance carrier and so on; some folks are presumably only getting a few hundred bucks per year, others are getting several thousand dollars.

There are certainly some problems with the ACA, and plenty of issues to be resolved...but the only ones who are really in a position to complain about this particular issue are those in the Yellow sections. These are people who are stuck paying 100% of the cost of their policies, while 88% of the country is receiving partial or full taxpayer-subsidized coverage. The final 9%, of course, are receiving no coverage whatsoever.