OK: Calculating the average requested rate changes within each state is fairly easy (assuming I can dig up the necessary data). As I do every year, within each state's carrier filings I do the following:

That would give the following:

Simple, right? Up until last year, that's pretty much how I kept it. I'd run the numbers this way for every state during the requested change phase, then go back and re-run the numbers using the final, approved rate changes. Along the way, carriers would drop out, jump in, drop or add certain policies (some would discontinue PPOs but add more HMOs, etc), and so on, so the final, approved rates and averages often bore little resemblence to the original requested ones.

Last year, however, I had to up my game. The Trump Administration's decision to cut off Cost Sharing Reduction (CSR) reimbursement payments was a very specific and deliberate decision on Trump's part intended (by his own word) to cause the ACA exchanges to "blow up". So were other administrative decisions such as slashing the marketing budget for HealthCare.Gov by 90%, slashing the navigator/outreach budget by 40%, attempting to get the IRS not to enforce the ACA's Individual Mandate, cutting the Open Enrollment Period in half and so on.

In light of these deliberate attempts to undermine and sabotage the ACA, and given that the carriers in many states were already submitting two sets of 2018 rate filings anyway (one with CSR payments, one without), I decided to do my best to separate out what portion of the rate increases was due to the normal factors and what portion was due to deliberate, blatant, utterly unnecessary sabotage efforts by Trump and Congressional Republicans. As it happened, I ended up having a pretty good track record.

OK, so what about 2019? Well, again, calculating the actual requested rate changes is fairly easy. The tough part is figuring out how much of that rate change is due specifically to the new batch of sabotage efforts by Trump and the GOP. So far, there's three of them, joined at the hip:

The good news is that just as they did last year with the CSR cut-off, many carriers this year are specifically stating not only that repeal of the mandate/expansion of #ShortAssPlans are causing a big chunk of their rate increases, but some of them are putting a hard number on how much is due to those factors.

In states where all (or at least a significant portion) of the carriers do so, I'm using their numbers to estimate the ACA Sabotage impact.

Even better, in some states, the state insurance department is doing this for me. For instance, New York made it very clear: 24.0% average increase, of which 11.9% is due specifically to the mandate being repealed (NY doesn't allow short-term plans at all).

Unfortunately, in many states, neither the insurance department nor the carriers provide any hard guidance on this (in some cases one small carrier out of 5-6 might do so, not enough to extrapolate from). In those cases, I've turned to the most comprehensive analysis of the issue I know of: The Urban Institute's study on The Potential Impact of Short-Term Limited-Duration Policies on Insurance Coverage, Premiums, and Federal Spending from back in March. Here's their bottom line: 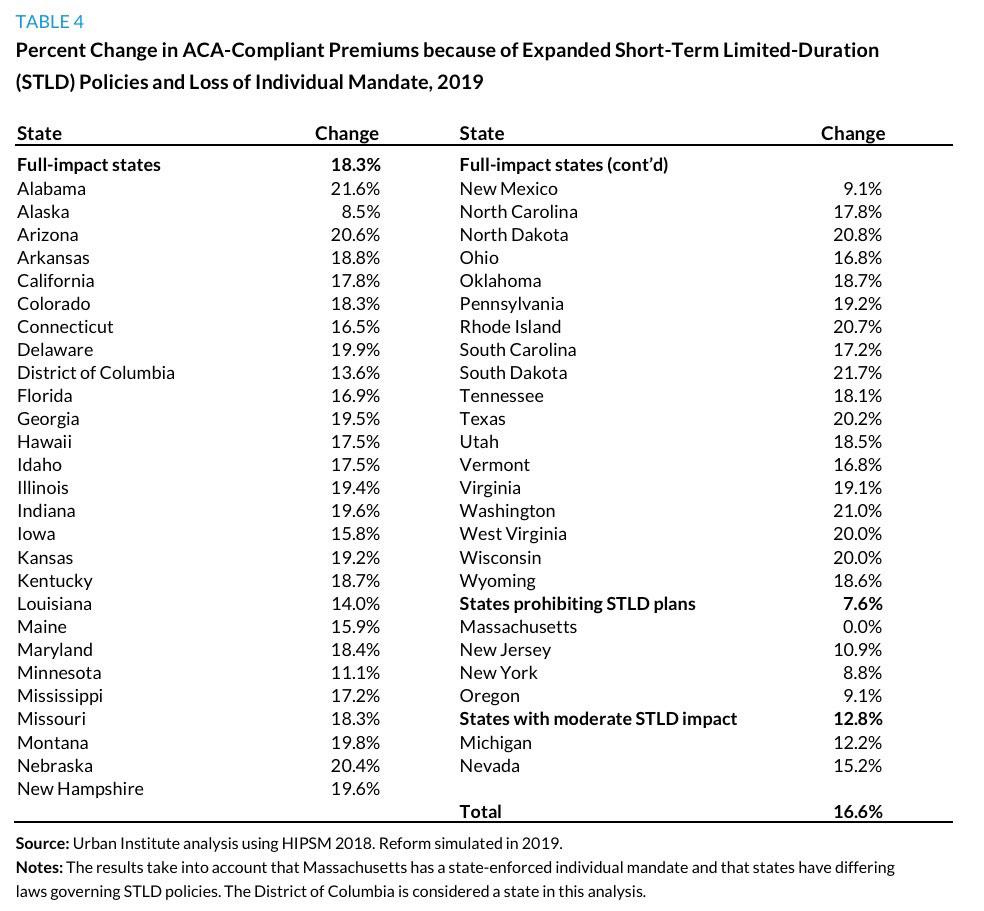 Obviously these are projections only; the actual average changes vary widely. For instance, in Rhode Island, Urban projected a whopping 20.7% sabotage factor...but the carriers themselves are only pinning about 1% on it. On the other hand, in New York, Urban projected just an 8.8% sabotage factor for mandate repeal + short-term plans combined...but it's actually somewhat higher: 11.9%.

With that in mind, for states where I don't have hard data from either the carriers or the state insurance department, I'm going to use the Urban Institute's estimates...but I'm going to knock 1/3 off their projections in the interest of erring on the side of caution.

For instance, in Pennsylvania, Urban projected a 19.2% sabotage increase. Since I don't have access to the actual rate filings and the PA Insurance Dept. didn't go into specifics about how much of their 2019 average rate change is due to mandate/shortassplans, I'm taking 2/3 of Urban's projection: 12.8%.

Pennsylvania carriers are asking for a 4.9% average rate increase next year, so I'm assuming that in the absence of both mandate repeal and #ShortAssPlans, they'd actually be asking for an average 7.9% rate decrease.

With all that in mind, here's what things look like as of today across the 10 states (well, 9 + DC) which have released their 2019 ACA Individual Market Rate Changes so far: 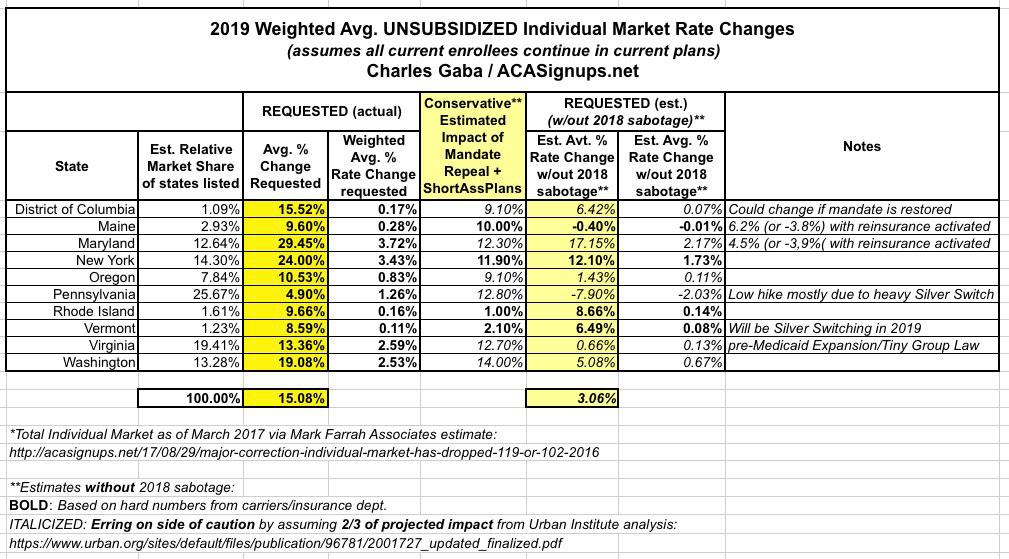 As of today, it looks like an average of around 15.1%, with around 12 points of that being due to mandate repeal / #ShortAssPlans, and the rest being actual, underlying cost increases and so forth. Obviously these numbers will jump around as more states release their data, and then they'll jump around again once the approved rate changes come in...not to mention other resubmission factors like Medicaid expansion in Maine and Virginia; reinsurance programs in Maine and Maryland, and so on.