At public information sessions later this week in Bangor and Portland, Maine Bureau of Insurance staff will take comments on a plan to re-establish the non-profit Maine Guaranteed Access Reinsurance Association. In 2012 and 2013, it helped defray the expense of insuring more than 3,000 Mainers with especially high medical costs related to specific diagnoses. Skeptics argued that benefits were eroded and questioned the extent to which the pool lowered premiums. But proponents said the program effectively held down the cost of individual insurance plans for many healthier Mainers, and the insurance bureau, with the backing of the Maine Legislature, says it’s time to bring it back into service.

MGARA originally funded its reinsurance pool by tacking a $4 monthly fee onto all private health insurance premiums in Maine, calling for insurers to chip in 90 percent of the monthly premiums of high-cost enrollees, and other mechanisms. High-cost consumers were unaware that their medical bills were being paid through the reinsurance pool, and their care was not affected.

Since there's still some uncertainty as to whether MGARA will be instituted in 2019 or not, the state insurance bureau had the carriers submit two sets of rate filings: One assumes MGARA reinsurance will be active, the other doesn't. If this gives you a sense of deja vu, that's because it's very similar to last year, when many carriers submitted 2 sets of filings depending on whether or not Cost Sharing Reduction (CSR) payments would be made in 2018. I've therefore added an extra column to the table below which shows how much of an impact this "mini-reinsurance" program would make...it's actually not much, but every dollar makes a difference.

Unfortunately, the filings for CHO and Harvard Pilgrim didn't specify how many enrollees they currently have, so I had to estimate this by dividing the total number of Member Months by 12.  I'm not sure how accurate this is, but their proposed increases are so close anyway (92% vs. 9.5%) that it wouldn't make more than a nominal difference regardless:

With the MGARA reinsurance program in place, the carriers will only ask for a 6.2% average increase vs. 9.6% without it.

More noteworthy, however, is the fact that Community Health Options specifically states in their filing (see below) that they'd be lowering their premiums next year if it weren't for two things. You guessed it: Repeal of the individual mandate, and expansion of short-term and association health plans (#ShortAssPlans). They break it out to 5 percentage points each, so if you remove the sabotage factor, they'd be lowering rates by either 0.8% (without reinsurance) or 6.0% (with reinsurance).

In fact, CHO includes a bonus note: They also confirm that their concerns over the Trump Administration weakly enforcing the mandate this year were a major contributing factor to their 2018 rate increases. I was shouting about this from the rooftops all last summer/fall, and several carriers called it out last year as well, but this is the first time I've seen one of them confirme it after the fact.

The other two carriers don't give any hard numbers on the mandate/#ShortAssPlans factors, but assuming they're also around 10 points apiece, that means if you remove the mandate/shortassplan sabotage factor, Maine would likely be lowering 2019 premiums by either 0.4% - 3.8%. 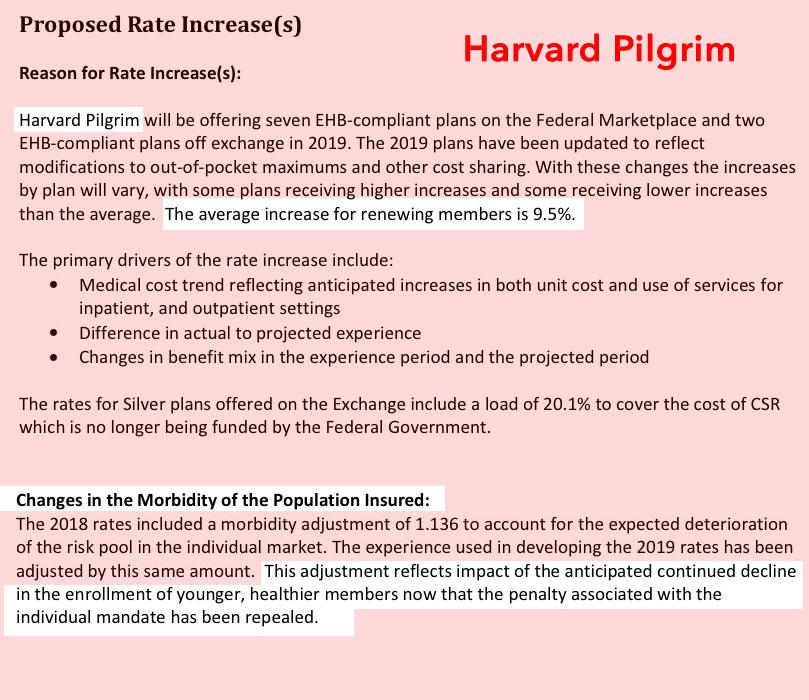