From there, it’s insightful to classify employees by their coverage status to understand both at what rate they’re covered by an employer and, as a result, at what rate they’re dependent upon non-employer coverage. The latest data from the Bureau of Labor Statistics show that 85 percent of full-time workers are given access to medical coverage and 63 percent participate in that coverage, while a drastically lower 19 percent and 11 percent of part-time workers have the same access and participation. 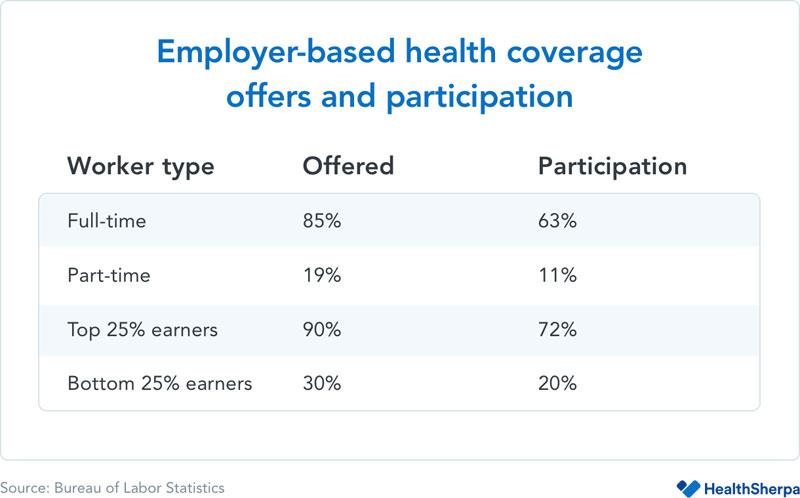 While those numbers show a clear distinction between full-time and part-time, there is another statistic that is equally, if not more, important. Only 3 in 10 of the lowest 25 percent of wage earners, regardless of employment status (full-time or part-time), have access to employer-based benefits, and just 20 percent participate in those benefits. By contrast — and it’s a stark contrast — 9 in 10 of the highest 25 percent of wage earners have access to employer-based health insurance, with 72 percent participation.

In other words, 22% of full-time employees have a standing ESI offer on the table but have refused to take their employer up on it.

UPDATE: As referenced in the article and as noted by several people this morning, that 22% is a bit misleading, since many of those employees are likely already enrolled in their spouses employer policy instead, or via some other type of coverage depending on their circumstances. Even so, that's still (potentially) a huge number, especially when combined with the 8% of part-time employees who are in the same situations.

As an aside, this ties in neatly with what I've termed the "Skinny Plan Glitch" of the ACA:

This one is related to the "Family Glitch" above. As I noted a year and a half ago, under the ACA, if a company offers a policy to their employees which costs less than about 9.5% of their salary and the employee takes a pass on it, they aren't allowed to receive tax credits on the exchanges. As Jed Graham explains in his book "Obamacare is a Great Mess":

a company might think it’s doing workers a favor by offering a skinny plan as a way for them to buy coverage on the cheap and avoid paying an individual mandate penalty.

Undoubtedly, many low-wage workers would object to ObamaCare’s affordability standard: For a $ 20,000-earner, a $ 1,900 insurance premium would be onerous, costing nearly twice as much as a subsidized silver exchange plan and about four times as much as bronze coverage. Here is the problem: If low-wage workers are offered employer coverage that qualifies as affordable –even if it isn’t –then the only policy within their financial reach may be a skinny one.

Graham explained to me that unlike individual market plans, which have to robustly cover the full list of 10 Essential Health Benefits, due to a quirk in the wording about minimum essential coverage of employer plans under the ACA, any plan they offer qualifies as long as there are no annual/lifetime limits and the ACA's list of preventative services are included. This means that employers may be required to offer policies to employees, but those policies may be extremely "skinny" on the actual benefits included. In response, many employees are caught between an "offered" plan which stinks or having to pay full price for one which doesn't. Solution? Amend the ACA so that all employer-provided plans have to be at least the same "Benchmark Silver QHP" status as those offered on the individual exchanges.

Getting back to the LinkedIn piece:

...If that observation holds true and current BLS statistics are indicative of future trend, fewer employees will be offered health insurance by employers as a percentage of all employees.

Which begs an important but simple question for employers: Most of you haven't guided employees to public assistance as a strategy, so why start now?

The answer: All of your employees need coverage and would benefit from your help, even if you're not footing the bill.

This gets into the crux of the matter: It's in employer's best interest to make sure their employees have decent healthcare coverage regardless of where it comes from:

Employees who do not get coverage through an employer frequently get it through some form of public program — most commonly Medicare, Medicaid, or ACA-subsidized individual coverage.

The Skinny Plan Glitch, as I noted above, ties in with the last point here. Increase the threshold for what's considered minimal employer coverage and two good things happen: Either more employees take up their employer plan or, if the employers fail to meet that threshold, at least those employees will now qualify for subsidies on ACA exchange plans.

However, going beyond the public-vs.-private debate, research has shown that a balanced, inclusive approach has a net positive impact not only for low-wage individuals but also for the companies that employ them — and help them meet their basic needs.

...Likewise, a report by the Peterson Institute for International Economics cites numerous studies showing that higher wages equates directly to lower absenteeism, less turnover, and fewer needs for both discipline and supervision — all of which have significant employer costs associated with them. One cited study, by UC Berkeley’s Institute for Research on Labor and Employment, found that the San Francisco Airport Authority reduced turnover by 34 percent by raising wages, which resulted in $6.6 million in aggregate personnel cost savings.

There are other benefits as well. From the Peterson study:

Other mechanisms by which higher wages can yield offsetting benefits include:

For retail, hospitality and food service employers, the last benefit should be of particular interest.

Well, yes. Especially when it comes to health. No one wants their waitress sneezing all over their food.

While research regarding workplace productivity primarily focuses on wages, employer-based health coverage can and should be seen as having a direct impact on real income. If I am offered health insurance through my employer that costs me and my family $476 per month, which is the average cost to employees cited in the Kaiser Family Foundation's 2017 Employer Health Benefits Survey, that may mean more total compensation for me but effectively $476 less I have to spend on other basic needs. For low-wage workers, that amount can drive their decision to participate in employer-sponsored coverage — which, in turn, drives their overall stress and workplace productivity in ways that have additional impacts on company HR, benefits and compensation budgets.

This is actually one of the reasons why I've listed repealing the EMPLOYER mandate on my ACA wish list...but only after most of the other items on the list (removing the 400% FPL APTC cap, beefing up the subsidy formula and fixing the Family Glitch and Skinny Plan Glitch) are done first. The employer would then be free to drop their ESI plan if they wanted to but would instead use the savings to pay the employees more which they could then use for a subsidized ACA exchange policy. The employer would save money from not having to pay the bulk of the premiums...but at the same time would lose the payroll tax exemption, so it should all work out in the end. Meanwhile the individual market risk pool would be improved while fewer employees would be trapped by "Job Lock".

First, let’s dispel the myth that it is illegal to guide your employees to public sources of health coverage (and other public assistance, for that matter). Law professor and policy expert Timothy Jost told the Washington Post “You are just helping [employees] get something they are entitled to” in relation to companies that help identify Medicaid-eligible employees for companies.

This is something which has always frustrated me about many of my fellow left-of-center healthcare activists. On the one hand, we're all calling for an increase in publicly-funded healthcare (expansion of Medicaid, expansion of Medicare, etc). On the other hand, we also have a tendency to criticize companies like Wal-Mart for "dumping" their employees on Medicaid instead of paying them a decent wage, etc. (this has become less of an issue for Wal-Mart of late, but still).

The problem with "Medicaid dumping" isn't that the employers are doing so, it's a matter of them doing so without having to help pay for the cost of the program.

Even with legal issues resolved, some employers may ask why would they provide that guidance? After all, there has traditionally been line of demarcation between benefits-eligible employees and non-benefits-eligible employees. Yet these distinctions are largely artificial and, as the research cited in this article have shown, frequently detrimental to both personal and financial health and to workplace productivity. The bottom line is that individuals need coverage and employers have the ability to help them with minimal effort and cost for a comparatively major benefit.

There's a lot more at the link, but the larger point is that there's a lot of reasons why ~28 million people are still uninsured, and while most of this requires significant legislative changes, some of it could be whittled away at by employers making a concerted effort to get employees to take up existing opportunities.