Support for such a proposal increases when framed as an option for anyone who wants it; three-fourths of the public favor a national Medicare-for-all plan open to anyone who wants it, but would allow people who currently have other forms of coverage to keep the coverage they already have. 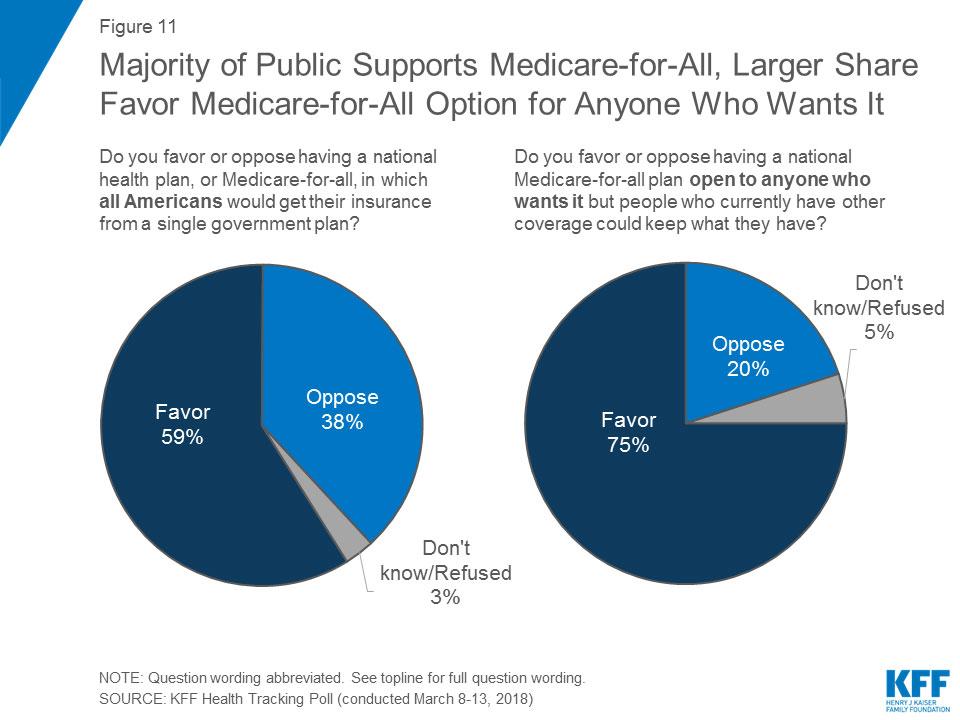 Wow. That's simply astonishing. Fully 75% of the public now supports a plan along the lines of the Center for American Progress's "Medicare Extra for All" proposal, in which Medicare would be significantly beefed up, then gradually expanded to fill in the uninsured and the unsubsidized populations, then absorb the rest of the individual market, then Medicaid and CHIP enrollees...but WITHOUT forcing the ~155 million people on employer-sponsored coverage to switch.

For two years now, I've been pointing out that regardless of how awesomesauce the plan itself may be, the angry backlash which President Obama faced over his "If You Like It You Can Keep It" promise back in late 2013 (which only directly impacted about 5-6 million people on non-ACA compliant individual market policies at the time) would be dwarfed by the fury of nearly half the country being kicked off their current coverage by the federal government whether they like it or not. As I said in January 2016:

Remember the several million people whose pre-ACA policies were cancelled back in December 2013 for not being compliant with the new law? Remember how the backlash to those several million having their policies taken away after the "if you like your plan you can keep it" brouhaha? Even though the vast majority of them ended up replacing their old policies with new ones which, for the most part, have better coverage (not to mention protection from being dropped via rescission, denial for having a pre-existing condition, maximum caps on their out of pocket expenses and, for many people, lower premiums thanks to financial assistance), the fact remains that when it comes to healthcare coverage, most people take it very personally.

That was only a few million people (plus a few million more since 2013 due to the 3-year "transitional period" extension granted in response to the backlash).

Now imagine not a few million, but 300 million people having their policies shut down and replaced with a new one all at once. Imagine the anger, the chaos, the confusion...even if the new system turns out to be better, more efficient, less expensive and less confusing across the board.

"But wait!" you might be saying: CAP's Medicare Extra proposal is mandatory for the much of the population! Well, sort of.

It would be mandatory for newborn infants...but they're not gonna complain, seeing how a) they're babies and b) they aren't having their "existing coverage" taken away since they weren't previously enrolled in any other policy (their mother was, but not them).

It would be mandatory for people newly turning 65...but they'd be transitioning into traditional Medicare otherwise anyway, and Medicare Extra would be far more comprehensive, so there's no excuse to complain.

It would eventually become mandatory for the individual market...but that would happen in a gradual sort of way, mostly via normal organic transition.

It would eventually become mandatory for those on Medicaid and the CHIP program...but again, it would be just as comprehensive and still at virtually no cost, so again, little room to gripe.

It would be optional for current Medicare enrollees...and to be perfectly blunt, they would gradually die off anyway, while everyone coming up behind them would already be on Medicare Extra.

And for a significant chunk of the population--around 16%, according to the Kaiser survey--it's that optional ability to buy into Medicare, vs. having it forced upon them, which makes all the difference in the world.

In fact, it's the partisan breakout of the Kaiser survey which is even more insightful:

The majority of Democrats and independents support both of these Medicare-for-all proposals. On the other hand, one-third (36 percent) of Republicans support having a national health plan in which all Americans would get their insurance from a single government plan, but support increases to 64 percent when asked about a national Medicare-for-all plan open to anyone who wants it, but would allow people to keep the coverage they already have. It is unclear how support levels would fare once each of these proposals became part of the larger public debate on health care in this country. Prior Kaiser Family Foundation surveys have found the public’s attitudes can be quite malleable, and some people could be convinced to change their position after hearing typical pro and con arguments that might come up in a national debate. 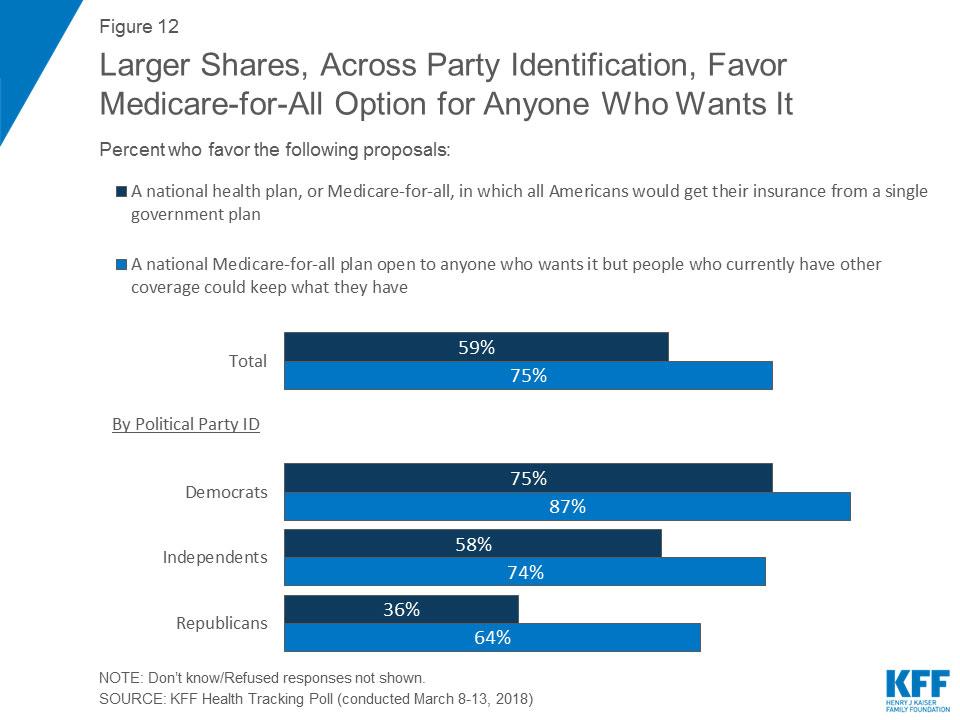 These are fantastic numbers for both proposals...but here's the most important stat:

That's a whopping 28% spike in GOP support, pushing it way over the 50% mark.

Why is this important? Because, while support for both M4A and MEFA would no doubt drop off somewhat as the downsides of either plan are presented (tax increases to pay for them foremost) and the RNC/FOX/Breitbart/Koch Bros flying monkeys started to attack, the MEFA plan would effectively have an extra 16-point "buffer" to help withstand the onslaught and actually get the program passed into law.

In addition, it means the odds of ACA-style sabotage against a MEFA-like healthcare plan AFTER it goes into effect should be minimiezed (not nonexistent, mind you, just minimized).

As precarious as the healthcare situation is at the moment under the quasi-ACA/Trumpcare hybrid we're currently experiencing, I've never felt more positive about where things could be headed on the healthcare front a few years down the orad...assuming the Dems are able to retake control of Congress this fall and the White House in 2020, of course.