With all the discussion about subsidized enrollees, unsubsidized enrollees, short-term plans, association plans, health sharing ministries and so forth swirling around the ACA stabilization/CSR reimbursement payment/Silver Loading debate, I just wanted to take a quick moment to remind everyone that "The Uninsured" isn't a single amorphous blob; it consists of several fairly specific subsets.

The good news is that the Kaiser Family Foundation is among the most reliable sources for this sort of data in the business. The bad news is that their estimates are out of date--this analysis/breakout was last updated in October 2017, but the actual survey data is from 2016. Needless to say, a lot has changed in the intervening year and a half...namely, the Trump Administration and two full ACA Open Enrollment Periods.

Nevertheless , it should be roughly accurate today even if the total numbers are a bit low (Gallup seems to think that the total number of uninsured Americans is back up over the 30 million mark since Trump took office, but there's a lot of fuzziness to sort out).

In any event, here's the rough breakout as of 2016 according to Kaiser: 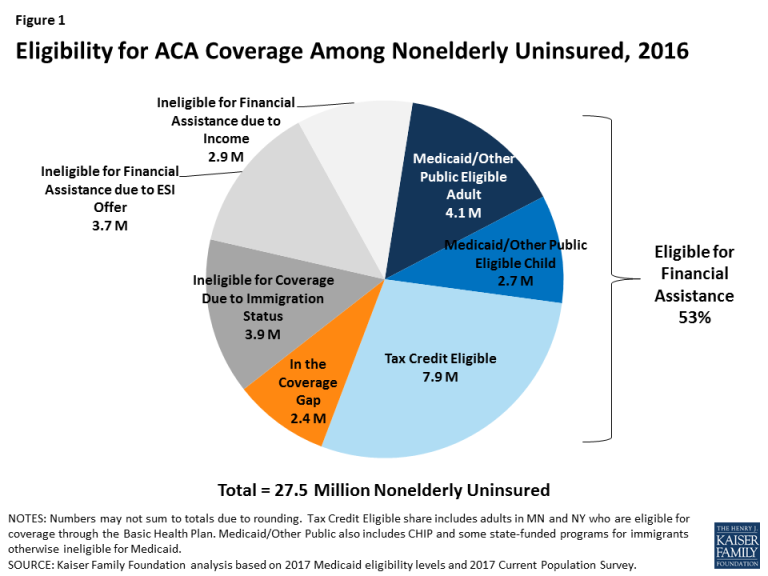 When you subtract those who are eligible for tax credits (either ACA exchange subsidies, Medicaid or the CHIP program) but haven't enrolled yet, as well as those caught in the Medicaid Gap and undocumented immigrants, you're left with two groups of people who are a) uninsured; b) are eligible to enroll in ACA plans; but c) only at full price: Around 3.7 million who have a standing offer of (usually crappy) healthcare coverage from their employer, and another 2.9 million who simply earn more than 400% of the Federal Poverty Line and therefore aren't eligible for subsidies.

It's this second group which I assume has grown the most over the past year or so...between the ~25% average unsubsidized rate hikes in 2017 and the ~30% hike on top of that this year (18 points of which was, once again, due specifically to Trump/GOP sabotage), I'm assuming perhaps 1-2 million unsubsidized individual market enrollees (mostly off-exchange, of course) have dropped their coverage since this study was put together.

I don't believe the undocumented immigrant population has grown much (not likely under the Trump Administration...), and the only way the Medicaid Gap would grow is if a few expansion states reversed their policies (granted, adding work requirements and the like could do so as well, I'm afraid). The subsidy/Medicaid/CHIP-eligible fields likely haven't changed much either. That leaves just those with ESI offers and those with incomes over 400% FPL.

Add these up and the total potential "unsubsidized individual market" population is likely around 13-14 million: 5-6 million currently enrolled in ACA-compliant policies and perhaps 8 million or so in these two categories. That's who the whole CSR/Silver Loading/#ShortAssPlans brouhaha is about. I should also note that as far as I can tell, neither people enrolled in short-term plans nor "health sharing ministries" are considered to have health insurance...which makes sense since neither one is legally considered such anyway.