BALL OF CONFUSION: Dems may have two more factors to consider re. the Omnibus Bill

Yesterday I came out against the pending ACA stability package because one of the 5 proposed provisions should be a flat-out dealbreaker for Democrats (the abortion ban), while another one is would hurt more people than it helps (CSR funding).

Today, I need to explain the problem with CSR funding in a bit more detail but to also note a new twist which makes it even more complicated...as well as taking note of a sixth provision being thrown into the mix by the GOP which, again, should be a dealbreaker for Democrats.

I'm on the record as being strongly in favor of a bill recently proposed by House Democrats Frank Pallone, Jr., Richard Neal and Bobby Scott which would repair, strengthen and expand the ACA in a half-dozen ways while also preventing or reversing another half-dozen types of sabotage of the ACA by the Trump Administration. Here's the full list of what would be included in what I've shorthanded "ACA 2.0":

Every one of the above is a good, solid, important improvement to the Affordable Care Act...with one partial exception, highlighted above.

Why? Because last fall a bunch of insurance carriers, state regulators and state-based exchanges got together and came up with a clever workaround for the CSR payments being cut off, called "Silver Loading" or "Silver Switching" depending on how they did it. The end result is that this is how ACA premiums changed depending on the enrollee's income: 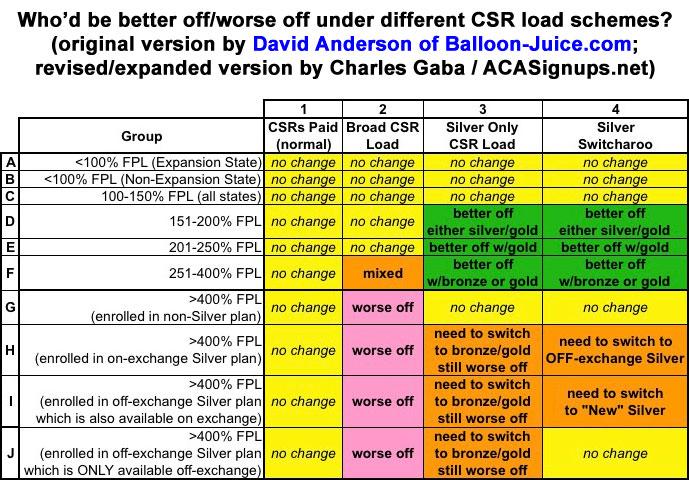 I know it's complicated, but the bottom line is that around 3.3 million people in the 39 states covered by HealthCare.Gov alone would see their net premiums increase, or around 36% of exchange enrollees. The percentage should be even higher for those in using the 12 state-based exchanges, since most of those went the "Silver Switch" route...I'd guess at least another 1.2 million, for a total of around 4.5 million people who'd see their premiums increase if CSRs are appropriated.

OK, so who would actually be helped by CSRs being funded? Well, on the exchange itself this would only be around 900,000 people (Axios tags it at 683K across the 39 states on HC.gov), but there's also the entire off-exchange ACA-compliant individual market to consider. All told this is around 4 million people or so, but not all of them are in plans which would be impacted by CSR funding one way or the other. I don't know what the breakout is, but I'd imagine perhaps half of them would benefit...let's call it another 2.1 million, for around 3 million total.

In other words, WITH SILVER LOADING/SILVER SWITCHING IN PLACE, appropriating CSR funding now would effectively hurt around 4.5 million lower-income people while helping around 3 million middle-class people. This puts both Republicans (who unintentionally helped create this scenario in the first place) and Democrats in awkward positions about what the Right Thing To Do is...but also on how to frame/pitch their decision.

For instance: The "ACA 2.0" bill proposed by Democrats does include CSR funding...but it also includes beefing up the subsidy formula and extending subsidies to those earning >400% FPL. That's a critical detail. Beefing up the subsidy cancels out the downside of funding CSRs while maintaining the upside.

Since the GOP's proposed Omnibus deal doesn't include improving the subsidy formula or removing the cap, it becomes a net negative for Democrats.

In addition, funding CSRs now after yanking them away for a full year would cause further confusion and turmoil when Open Enrollment comes around, as millions of people shop around and are shocked to see their subsidies suddenly plummet and their net costs increase at the same time the headlines are claiming premiums have decreased.

HOWEVER, there's another twist to this mess which I completely forgot about: It's also possible that Silver Loading won't be allowed next year.

It's my understanding that it's possible CMS may have the legal authority to forbid insurance carriers from utilizing the Silver Load/Silver Switch workaround going forward--that is, it could prove to be a one-time thing which gets nipped in the bud.

If so, and if CMS does indeed yank the rug out from under Silver Loading, the "more harm than good" argument would become moot.

In that scenario, the upside of not funding CSRs would pretty much disappear, leaving only the down side. Again, this is a very tricky, complicated situation, and the water just keeps getting muddier, but it's something that Dems will have to take into consideration.

THAT BRINGS ME TO THE OTHER NEW TWIST:

Congressional Republicans and the White House want to add a bill that would expand access to cheap, low-quality healthcare plans to a long-term spending deal.

The bill from Sen. John Barrasso, R-Wyo., would expand the duration of short-term insurance plans, which would compete with Obamacare plans. The bill would build on the Trump administration's regulatory move to expand the plans.

...Barrasso's legislation builds on a proposed regulation that the Trump administration released this year. The proposed rule would expand the duration of short-term plans from 90 days to 364 days.

The legislation would do the same thing, but it would make the plans “guaranteed renewable” if the applicant wants, according to a statement on the bill.

Note that if included, this would be the polar opposite of #7 on my list above ("Codify restrictions on short-term plans").

The Barrasso bill should be treated by Democrats as a deal-breaker just as the Abortion Language provision.

I'm sure there will be more nonsense as the clock keeps ticking, but here's where things stand as of this morning:

Put another way, the only clearly positive item on this list is the $10 billion/year in reinsurance funding. Two are simply unacceptable. Two are sort of neutral depending on your POV, and one (CSR funding) is just a mess at this point.