GOP fretting over whether they hate abortion more than they love saving their own skins.

via Caitlin Owens of Axios...

Sens. Lamar Alexander and Susan Collins have proposed a market stabilization package that would include funding for the Affordable Care Act's cost-sharing reduction subsidies for three years, three years of federal reinsurance at $10 billion a year, additional ACA waiver flexibility for states, and expanded eligibility for "copper" plans.

Alexander presented the plan yesterday to America's Health Insurance Plan's board of directors, adding that if Democratic leadership supports the bill, “it’ll be law by the end of next week." Alexander has long said the package should be included on the omnibus spending bill.

This news mostly confirms that the proposal which Oliver Wyman's projection analysis from the other day referred to is legit:

Owens doesn't clarify whether those are the only elements of the proposed Omnibus deal, but if so, it's an updated/blended version of the previous Alexander-Murray & Collins-Nelson bills, and would include:

And of course, the piece of poo floating in the pool...

#4 ("waiver flexibility") might be harmless or harmful; I can't draw any conclusions about it without knowing specifics.

#2 ($10B in reinsurance per year) would be a very good thing, as I noted the other day.

Here's what I wrote about #3 (Copper Plans Available for All!) last fall:

Currently, as Washington State actuary Rebecca Stob explained to me, one of the reasons why Catastrophic plans are so dirt cheap is because they're on their own, separate risk pool (at least for purposes of Risk Adjustment...I'm a little fuzzy on the distinction between that and Price Indexing).

...This is vitally important, because it means that one of two things happens: Either a lot of people go for Copper...or hardly anyone does.

In short, I'm sort of iffy on Copper Plans, but I'd be willing to live with them if necessary.

As I've written about too many times to remember, I was in favor of funding CSR reimbursements for much of last year...but the moment that the carriers/exchanges/regulators came up with the Silver Load/Silver Switch workaround, I completely changed my tune. The CSR/premium/subsidy situation is completely turned around now, to the point that funding CSRs NOW would actually hurt more people than it helps...at least without some other significant restructuring or enhancement of the subsidy formula, anyway.

As Colin Baillio of Health Action New Mexico put it:

Here’s what ending CSRs did for New Mexicans. Reinstating CSRs will raise costs for working families. 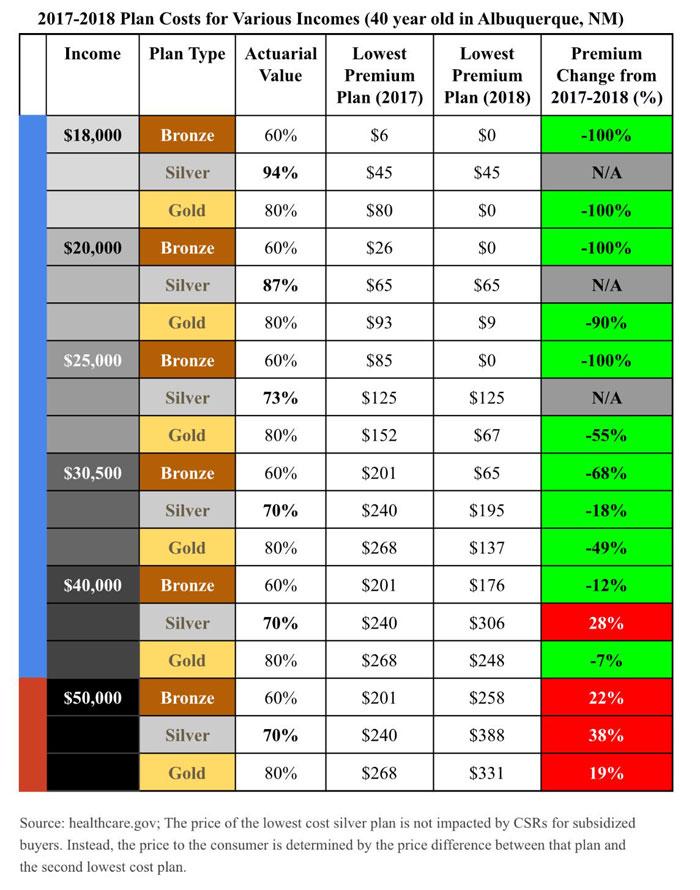 Finally, there's the abortion language, which is just a big tired old crock of stupid for several reasons.

Here's what I wrote about it back in October:

It's possible that the Alexander-Collins plan would only apply to the federal exchange, which would cut CA and NY out of the loop as they both operate their own exchanges...but Oregon might be in a pickle, since they rely on HealthCare.Gov to run their platfom. Not sure about that.

Of course, regardless of whether this is limited to HC.gov or not, putting the kibosh on any abortion coverage being offered even if paid for directly by the enrollee should be completely unacceptable to Congressional Democrats, period...and judging by the developments the past week, that appears to be the case; good.

$10 billion/year in reinsurance would substantially lower premiums for unsubsidized enrollees without raising the net cost for subsidized folks. Copper plans would at the very least scratch one of the attack points on the ACA exchanges off the list, while also making the policy types easier to explain ("Platinum/Gold/Silver/Bronze/Copper" is easier than "P/G/S/B...oh, and there's also these "Catastrophic only" plans which are only available if you're under 30..."). Making waivers flexible would...I dunno, make them more flexible, I guess.

Now, politically, it's probably in the Democrats best interest not to agree to any stabilization measures--a classic case of flipping the script on what the GOP did to the Obama Administration for 8 years by refusing to lift a finger to help improve the law. However, at least in the case of reinsurance, they'd be helping people without hurting anyone in the process.

Appropriating the CSR reimbursements at this point, however, would raise net costs for several million people, effectively cancelling out any good it did. For that matter, the only "good" it did would involve reversing the impact of the very sabotage of the law which the GOP themselves deliberately caused to happen in the first place.

This is the essence of chutzpah: Trump & the GOP deliberately caused unsubsidized premiums to increase by a good 15% by bringing the lawsuit and cutting off payments in the first place...then turn around a year later and appropriate the very funding they caused to be cut off, lowering unsubsidized premiums by 10% and claiming "SEE! WE LOWERED OBAMACARE PREMIUMS! VOTE FOR US!"

The Dems should walk away from this unless both the abortion & CSR elements are removed.