The Kaiser Family Foundation runs a highly respected monthly national tracking poll on healthcare issues. Their latest was just released, and while there's a bunch of interesting stuff included, there are two main takeaways. Here's the first:

The February Kaiser Health Tracking Poll finds a slight increase in the share of the public who say they have a favorable view of the Affordable Care Act (ACA), from 50 percent in January 2018 to 54 percent this month. This is the highest level of favorability of the ACA measured in more than 80 Kaiser Health Tracking Polls since 2010. This change is largely driven by independents, with more than half (55 percent) now saying they have a favorable opinion of the law compared to 48 percent last month. Large majorities (83 percent) of Democrats continue to view the law favorably (including six in ten who now say they hold a “very favorable” view, up from 48 percent last month) while nearly eight in ten Republicans (78 percent) view the law unfavorably (unchanged from last month). 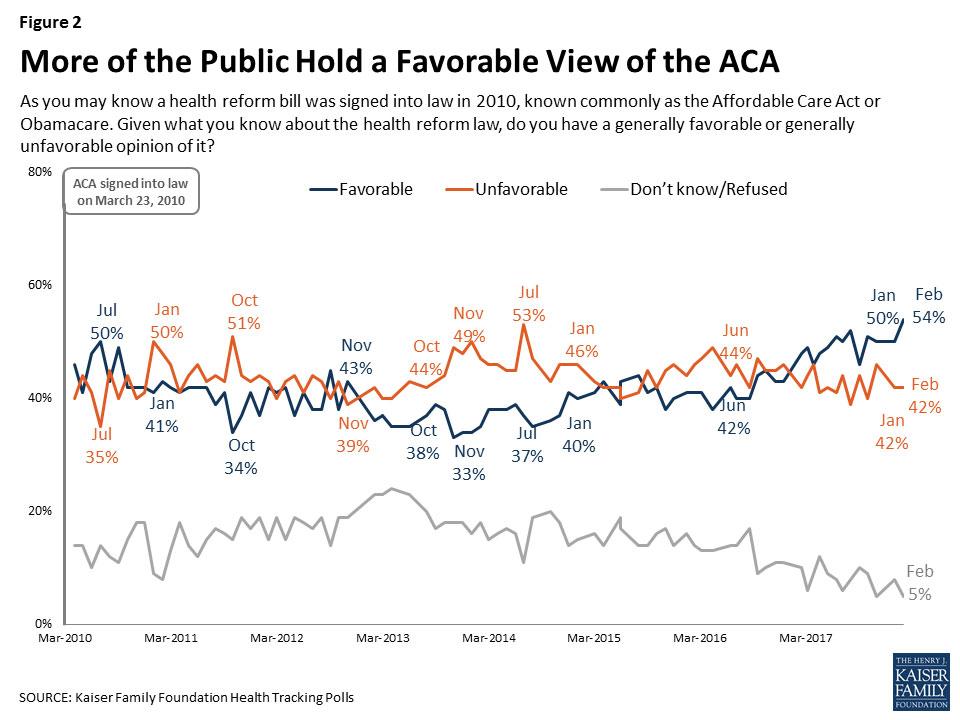 What else is there for me to say? After 8 years of relentless attacks, lies and sabotage about the ACA by the GOP, the Koch Brothers, FOX News, Breitbart, Donald Trump and so forth, they've managed to make it...popular.

Even more ironically, this all-time high approval rating (a 12 point net favorability!) comes as the healthcare law is actually in an extremely weak/precarious state due to the bloodying given to it by the Trump Administration and Congressional Republicans. The combination of the CSR reimbursement payment cut-off, ad/outreach starvation, the repeal of the individual mandate and the impending proposed #ShortAssPlans scheme have weakened the ACA considerably...and yet in some ways it has taken on an almost Nietzsche-like quality.

I thought it'd be interesting to note some other key points in the ACA's history as well: 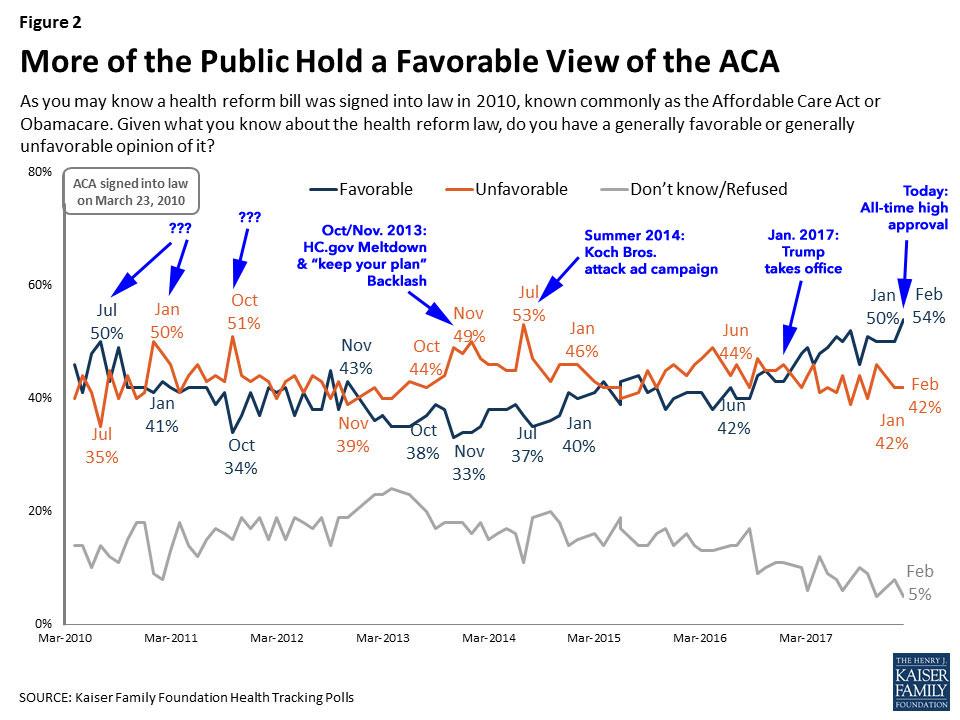 The first three points stump me a bit. There was an approval spike in July 2010, just 4 months after the ACA was signed into law, which seems odd since I thought that was also at the height of the Tea Party insanity (screaming at Democratic Congressional town hall meetings and so forth), just a few months before the GOP would go on to have a massive red wave in the 2010 midterms. Conversely, I have no idea what happened specifically in January 2011 or October 2011 to cause the sudden spikes in disapproval, seeing how the most controversial parts of the law didn't ramp up until over 2 years later.

There was, understandably, a large spike in disapproval in October/November 2013, fueled mainly by the horrendous technical problems with HealthCare.Gov's launch, the subsequent cancellation notices sent out to several million people ("if you like your plan you can keep it") and Ted Cruz's federal government shutdown...but hatred of the ACA didn't reach its true peak until July 2014, in the midst of the 2014 midterm all-out attack advertising blitz by the Koch Brothers.

Interestingly, by the time Donald Trump took office in January 2017, views of the ACA had mostly settled in at a rough split...but since then, in response to a brutal series of legislative attacks by Congressional Republicans and rhetorical attacks by Donald Trump, the public as a whole has rallied to the defense of the ACA.

Result? As of last month, a full 54% of the public now supports the law, while only 42% are now opposed to it.