UPDATE x2: MARCH 24th: "Created by, inspired by, and led by students."

UPDATE 2/18/18: I noted in my original post last night that "it's important to note that the [3/14] walkout doesn't appear to have started with the Stoneman Douglas students themselves, but the Women's March folks. Or perhaps it was suggested to them by some students, I don't really know."

Well, it sounds like there may have been a bit of message co-opting, (or perhaps not; see 2nd update below) well-intentioned though it may have been. Apparently there's a third date being touted for a different event: #MarchForOurLives, on March 24, nationally...and this one is officially endorsed/touted by the students themselves, which I think is critically important:

March For Our Lives is created by, inspired by, and led by students across the country who will no longer risk their lives waiting for someone else to take action to stop the epidemic of mass school shootings that has become all too familiar. In the tragic wake of the seventeen lives brutally cut short in Florida, politicians are telling us that now is not the time to talk about guns. March For Our Lives believes the time is now.

School safety is not a political issue. There cannot be two sides to doing everything in our power to ensure the lives and futures of children who are at risk of dying when they should be learning, playing, and growing. The mission and focus of March For Our Lives is to demand that a comprehensive and effective bill be immediately brought before Congress to address these gun issues. No special interest group, no political agenda is more critical than timely passage of legislation to effectively address the gun violence issues that are rampant in our country.

Every kid in this country now goes to school wondering if this day might be their last. We live in fear.

It doesn’t have to be this way. Change is coming. And it starts now, inspired by and led by the kids who are our hope for the future. Their young voices will be heard.

Stand with us on March 24. Refuse to allow one more needless death.

MARCH FOR OUR LIVES!

"My message for the people in office is: You're either with us or against us. We are losing our lives while the adults are playing around. And we have received endless support from your generation, and we thank everbody for that immensely, because...we really appreciate it...we don't need you. On March 24th, you are going to be seeing students in every major U.S. city marching, and we have our lives on the line here, and at the end of the day that is what's gonna be bringing us to victory, and to making some sort of right out of this tragedy. This is about us begging for our lives. This isn't about the GOP, this isn't about the Democrats. This is about us creating a badge of shame for any politicians who are accepting money from the NRA and using us as collateral.

I think Casky's point here is that the older generations are the ones who have put the children in danger in the first place, so it's a more than a bit presumptuous of us to try and take control of the movement which they're now building, even if it's to clean up the mess that we've made for them. We can help in various ways, of course, offering advice, suggestions (upon request), funding, infrastructure, legal assistance, etc, but ultimately, they have to be the ones in charge of it.

To be honest, Kasky's "we don't need you" statement reminds me a little bit (but only a little) of a scene from "Malcolm X":

As an aside, I should note, as Kevin Cassell explains here, that while this incident did happen pretty much as depicted in the film, it had a lot more impact on Malcolm X later in his life as well:

...Then a young firebrand, Malcolm X railed against all white people, including “white liberals” who sought to integrate themselves in the struggles of black people. Add white cream to black coffee, he analogized, and you weaken it. But as he grew older, and especially after his life-transforming trip to Mecca, Malcolm abandoned such separatist views. In a later chapter, he wrote: “I regret that I told her she could do ‘nothing.’ I wish now that I knew her name, or where I could telephone her, and tell her what I tell white people now when they present themselves as being sincere, and ask me, one way or another, the same thing that she asked.”

In any event, while I don't know what's going on with the 3/14 or 4/20 events, it's the one endorsed by the students themselves which I'll be promoting going forward:

UPDATE x2: OK, it looks like all three events are a go, and are supporting each other after all: 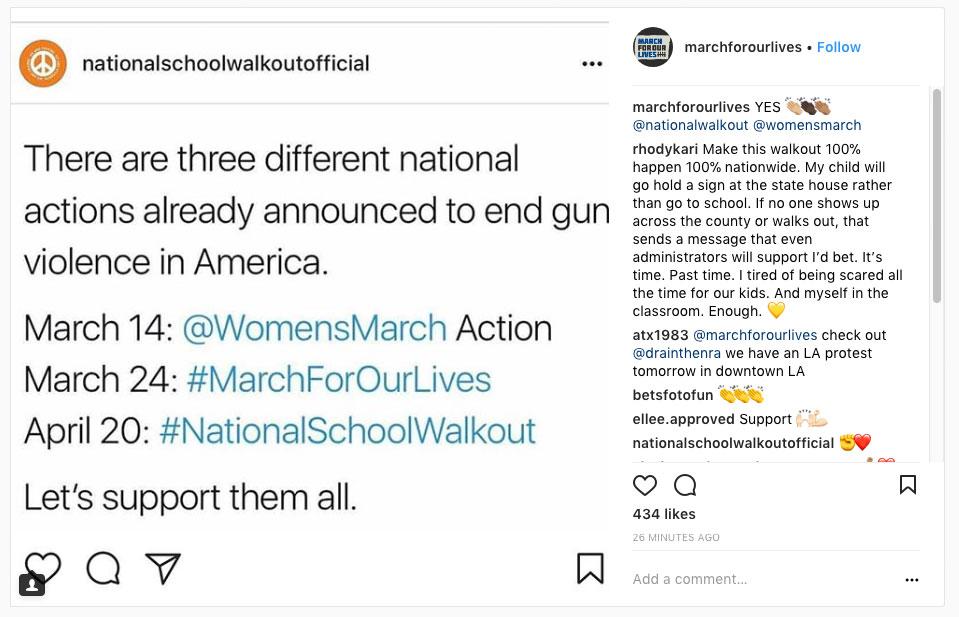 I guess I have a bit of egg on my face; my apologies for making something out of nothing here.

Anyway, glad to hear that they're working together on these events.

UPDATE: Although there's been some confusion--I've heard calls for a walkout on 3/14 or 4/20, as well as calls for a "general strike" refusal to attend school at all--I've been assured by several folks that the idea here is a one day protest to raise awareness/visibility/etc. If so, then as noted below, much of this post probably doesn't apply. I'm leaving it up regardless, however, because I still think there are some important points to keep in mind.

A couple of days after the latest horrific school shooting in Parkland, Florida, a movement started to grow calling for a massive, national School Walkout protest to call for banning assault rifles and other gun violence prevention legislation, among other things.

While I've been furiously posting/tweeting items about the issue as much as anyone else (including one which has been viewed nearly 900,000 times as of this writing), I've only posted two tweets specifically about the proposed school walkout itself...both of which were prefaced with a significant note of hesitency about getting behind such an event:

I haven't decided whether this is the way to go or not, but it deserves more awareness, at least. https://t.co/c0aSgeRNnQ

To be honest, I wasn't quite certain myself why I included these caveats in front of what seems, on the surface, to be an obvious thing for me to support.

This evening, my friend Jon Gold, a liberal gun enthusiast (yes, they exist) and former NRA member himself--who is now working with Moms Demand Action to help bring about common sense gun/firearms policy--made me realize why I haven't been able to bring myself to fully endorse/support such an action with a rather ranty Facebook post. I've cleaned up the formatting a bit since he had it in kind of a single stream of consciousness blob:

Ok LIBERALS LISTEN UP. SCHOOLS ARE YOUR FRIENDS!!!!

Boycotting the schools you actually need isn't going to help you.

Walking out on the one institution that you need to get to your next step isn't going to help you it's going to fulfill exactly what they need. THEY want to leave school. FINE close them and we'll save the money. Lay off the teachers. Sell the buildings.

Remember, people like Betsy DeVos--who is now the U.S. Secretary of Education--hate public schools. She and her cronies are entirely devoted to destroying the public school system in general by a) privatizing everything into profit-based, zero-accountability charter schools which b) are also crammed full of evangelical Christian theology as a bonus. Anything which causes secular public schools to close or be disrupted is completely fine by them.

THINK LIKE THE OTHER SIDE FOR ONCE IN YOUR DAMN LIVES. THE POCKETBOOK GOD DAMNIT not kill off your own assets for your own sake think. Don't shop where they sell bullets and guns.

YOU DON'T BOYCOTT THE THINGS YOU NEED. YOU NEED SCHOOLS!!! DAMNIT THINK PLEASE....only the whole damn future depends on it.

The pocketbook...stop shopping at Wal-Mart, Meijer, Sporting Goods Stores... form a human wall around a gun shop. For all that you think holy learn to attack the problem not walk out on your friends. SCHOOLS AREN'T THE ##$/ING PROBLEM.

The problem is getting hit by bullets. Who the hell is running this shit show. THINK DAMNIT!!! IT'S ALL ON THE LINE!! RIGHT NOW!!! Please think tactically. SCHOOLS are your friends. Hurting teachers and students won't help your cause. AGAIN it costs you everything and them nothing. They win. You lose.

Regarding his last part, where he asks "who's running this", it's important to note that the walkout doesn't appear to have started with the Stoneman Douglas students themselves, but the Women's March folks. Or perhaps it was suggested to them by some students, I don't really know.

What I do know is that Gold makes some valid points here. If the "walkout" is a one-day event to show solidarity and so forth, that's probably fine, and in fact it can be used as an educational/teaching/learning experience, of course.

If, however, the idea is for the students to refuse to attend classes for multiple days or weeks on end until legislation is enacted, as Gold points out, this is unlikely to have the type of effect that they're looking for.

Then again, I could be totally wrong about this. I'm not saying this shouldn't happen, but I do agree with Gold that it would likely be far more effective to boycott, picket and/or protest the outlets that sell and deal in guns, such as Wal-Mart, Meijers, sporting goods stores, gun shops, firing ranges and so forth. Maybe those are being planned as well, in which case I totally applaud the efforts.

I should also note that I'm not the only one who's not necessarily 100% gung ho about the walkout idea. Here's Cameron Kasky, a Stoneman Douglas students who is also one of the emerging leaders of the movement himself:

Not sure what we should do yet... wish I had a good answer https://t.co/8uJTd4GoOR

@cameron_kasky you have the potential to change the world, If I were you I would protest and refuse to got to school.

Maybe he's solidified his decision in favor of or against the walkout since posting this, I'm not sure. Anyway, just wanted to get that off my chest.