Idaho: "Freedom's just another word for...'better not get sick.'"

Freedom's just another word for..."better not get sick."

Last week, Idaho made a startling announcement: It will allow insurers to sell health insurance that does not comply with Obamacare regulations. This means that, in Idaho, health insurance plans could once again deny coverage to people with preexisting conditions — or charge them higher prices.

They could decide to not cover certain benefits that Obamacare mandates (maternity coverage, for example, was often left out before the health law) or put lifetime caps on their benefits. Idaho is the first state to roll out this type of regulation; it did so in a bulletin last week, first reported by the Wall Street Journal.

What we know: The Idaho rules clearly run afoul of federal law. The Affordable Care Act outlaws the exact type of plans that Idaho wants to allow onto its insurance market.

What we don’t know is what happens next.

She also noted that there are two reasons why the insurance carriers were likely to think long and hard before actually offering such policies: They'd be blatantly illegal, and they could end up shooting themselves in the foot by doing so:

...For one thing, it’s a really big legal risk. Insurance plans could easily end up facing lawsuits, for example, for capping a member’s lifetime benefits when the ACA clearly outlaws those limits.

But there's a second risk as well, which goes back to the reason the Cruz Amendment would've been a disaster:

They might siphon off all the healthy people into these skimpy plans — while leaving premiums in their ACA-compliant plans to go up and up. Health insurance plans strongly prefer to operate in an environment where everybody plays under the same set of rules.

Idaho is offering a scenario where there are two sets of rules: one for the marketplace, and one for other plans. It’s far from clear any insurance plans want to test out that second scenario, even if offered the opportunity.

Kliff went on to note, and I expalined in deatil, how the setup in Idaho--requiring carriers to offer both fully ACA-compliant policies on the exchange and non-compliant policies off the exchange--would effectively put all the other carriers in the state into a "Prisoner's Dilemma" scenario, where they'd have to choose between facing massive legal exposure on the one hand vs. having their risk pool and Medical Loss Ratio devastated on the other:

That would be nightmarish enough, but there's also another possibility if one carrier jumps into the Illegal Off-Exchange Policy market, the other carriers in the state...

...might raise their premiums on Obamacare plans as a result, expecting that some healthy people will exit to those types of plans.

“It will probably force insurers to increase their premiums, just to account for the possibility that their competitors are going to take the good risk,” said Sam Berger, a senior adviser at the Center for American Progress and former Obama administration staff member. “Idaho’s claim is that their premiums are too high. But we know what insurers do when there is uncertainty: They raise premiums.”

Well, it turns out that at least one Idaho insurance carrier didn't give much thought to the consequences of their actions after all. As Anna Wilde Matthews reports over at the Wall Street Journal:

Blue Cross of Idaho said it plans to use new rules set by state regulators to sell insurance that doesn’t meet all the requirements of the Affordable Care Act, a move that could force the Trump administration to take a stance on the legality of such products.

The not-for-profit company’s efforts will be closely watched by officials and insurers around the country who want to understand the limits of states’ ability to carve out their own health-insurance rules.

Once again: This would directly violate the Community Rating provision of the ACA, which states that major medical insurance policies cannot charge people different amounts for the same policy based on their medical condition or pre-existing health conditions, period. 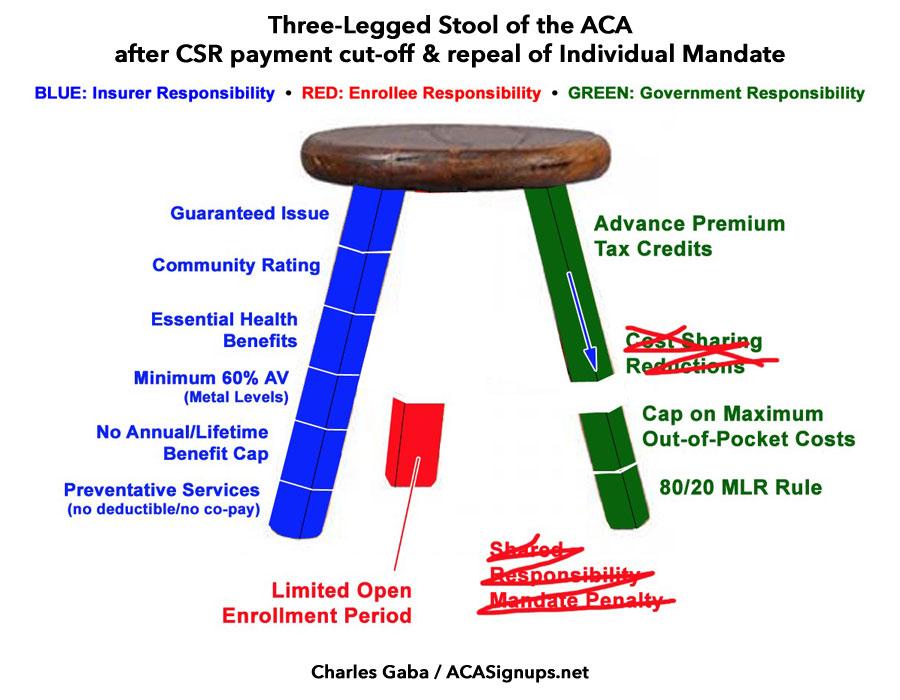 Legal experts have suggested that such products would violate the ACA. A spokesman for the Department of Health and Human Services said, “we are continuing to monitor the situation in Idaho. HHS is committed to working with states to give them the flexibility to provide their citizens the best possible access to health care, within the bounds of the law.”

You can expect plenty of questions about this of newly-installed HHS Secretary Alex Azar at his Congessional hearings today.

Blue Cross of Idaho said it filed late Tuesday with state regulators to begin marketing five products under the new rules. After a state review, the insurer said it hoped to begin selling the new “Freedom Blue” plans in early March, with coverage first taking effect at the start of April. Blue Cross is the biggest ACA insurer in Idaho. Company officials said they plan to continue to offer plans that comply with the law alongside the new products, a requirement of the state rules.

Well, now. They aren't wasting any time, are they?

Aside from the eye-rolling naming of the plans ("Freedom Blue"? Really? I wonder if they consulted with GOP Bob Ney and Walter B. Jones about that one? Oh, wait...Ney was sentenced to 2 1/2 years in jail for corruption. Never mind), I'm stunned that they're planning on offering these plans immediately. I'm pretty sure most people assumed they'd at least wait until January 2019 to launch them.

This opens up another whole can of worms. Remember, 2018 premiums for ACA exchange policies are locked in through the end of this year. What happens if, say, 1/4 of the ~95,000 currently enrolled in ACA compliant plans via Your Health Idaho drop those policies and shift over to these new, non-compliant plans? The insurance carriers will lose 25% of their revenue, presumably from their lowest-cost enrollees...but without being able to increase their premiums to account for the massive shift until 2019. Some of them would likely take a massive bath for 9 months out of the year (remember, the new plans would kick into effect starting in April), just as many carriers had to eat a large loss for the last 3 months of 2017 when Trump pulled the plug on CSR reimbursement payments.

...Blue Cross said the proposed new plans would include a maximum benefits payout of $1 million per person annually. Under the ACA, insurance plans aren’t allowed to limit the total coverage. Some of the new state-based plans proposed by Blue Cross would also have a higher cap on the out-of-pocket charges consumers pay for their care than is authorized by the ACA.

Take another look at the image above. The 2nd sections from the bottom of the blue and green legs would be gone.

The new Blue Cross state plans’ premiums would vary based on an enrollee’s health status—for instance, for one of its new plans, the insurer suggested that the best rate for a healthy 45-year-old could be around $194.67 a month, while a person of the same age with worse health could pay as much as $525.69. For one of its “bronze”-level ACA plans, the premium for a 45-year-old, regardless of health history, would typically be around $343.09, the insurer said.

The premiums on the Blue Cross state-based plans could also vary by age up to a ratio of five to one, while the ACA allows plans to charge older consumers only as much as three times more than young ones. Blue Cross said its new state-based plans would generally cover benefits similar to those mandated for ACA plans, but one version wouldn’t include maternity care.

There goes one of the 10 Essential Health Benefits, although it sounds like this would actually be among the "smaller" violations of the law. "Smaller", that is, unless you enroll in that plan and then become pregnant later that year, of course. Then you're on your own. Pray you don't have any complications in your pregnancy.

...Blue Cross’s Mr. Jeppesen said the insurer was “confident we have clear guidance from our local regulator,” and has “really thought through the risk here as well as the opportunities.”

Hmmmm. Either the fix is already in...or Mr. Jeppesen's confidence is a wee bit misplaced.

...Dean Cameron, director of Idaho’s Department of Insurance, said the state was confident the new plans would pass legal muster. The state’s move to allow the products “bolsters, helps and complements the ACA plans,” he said. Mr. Cameron said the new plans could help hold down rates on ACA plans by attracting some healthy new insurance consumers; rates for the new plans would be linked to those for ACA-compliant insurance.

I'm no lawyer, but THIS appears to be the only (legally) saving grace for this scheme: The fact that both the ACA-compliant and non-compliant policies would be part of the same risk pool. The argument Cameron is using here goes as follows:

Again, I have no idea how much legal weight that would have with a judge, but it sounds pretty thin to me. Plus, it's a completely speculative argument: There's no way of knowing whether it would actually improve the overall risk pool. It might have no net impact either way, or it might even make it worse. That seems like an awful lot to have riding on a massive violation of federal law.

Plus, as I noted in detail two weeks ago...

Despite the tie between rates of the old and new plans, the state-based products still carry a strong risk of pushing up rates on existing ACA-compliant insurance, said Larry Levitt, a senior vice president at the Kaiser Family Foundation. The state-based plans would “siphon off some healthy people who will be able to get cheaper coverage,” he said.

OK, legal crisis aside, what about the Prisoner's Dilemma thing? What's up with that?

Other Idaho insurers said they are still weighing whether to sell the new state-based plans, and some said they were awaiting greater legal clarity. In a statement, Regence BlueShield of Idaho, a subsidiary of Cambia Health Solutions Inc., said the ACA “is still valid law, and we do not see how the guidance contained in [Idaho regulators’ bulletin on state-based plans] fits within that framework.”

PacificSource, another insurer, said, “We do have concerns about the potential for federal objections or fines and the impact that these plans could have on the ACA risk pool.” SelectHealth, owned by Intermountain Healthcare, said “it is important that any new plan designs allowed in the Individual market do not create regulatory or legal liability for carriers or unnecessary instability in the market.”

Sounds wise to me.

As for the plans themselves, here's a little taste of what potential enrollees could expect to be subjected to, according to Hannah Recht and Zach Tracer:

Here are all the health questions Blue Cross of Idaho plans to ask people who buy its new non-Obamacare insurance plans (via @hannah_recht). Sick people can be charged more/denied coverage pic.twitter.com/V6FSRDUT0G 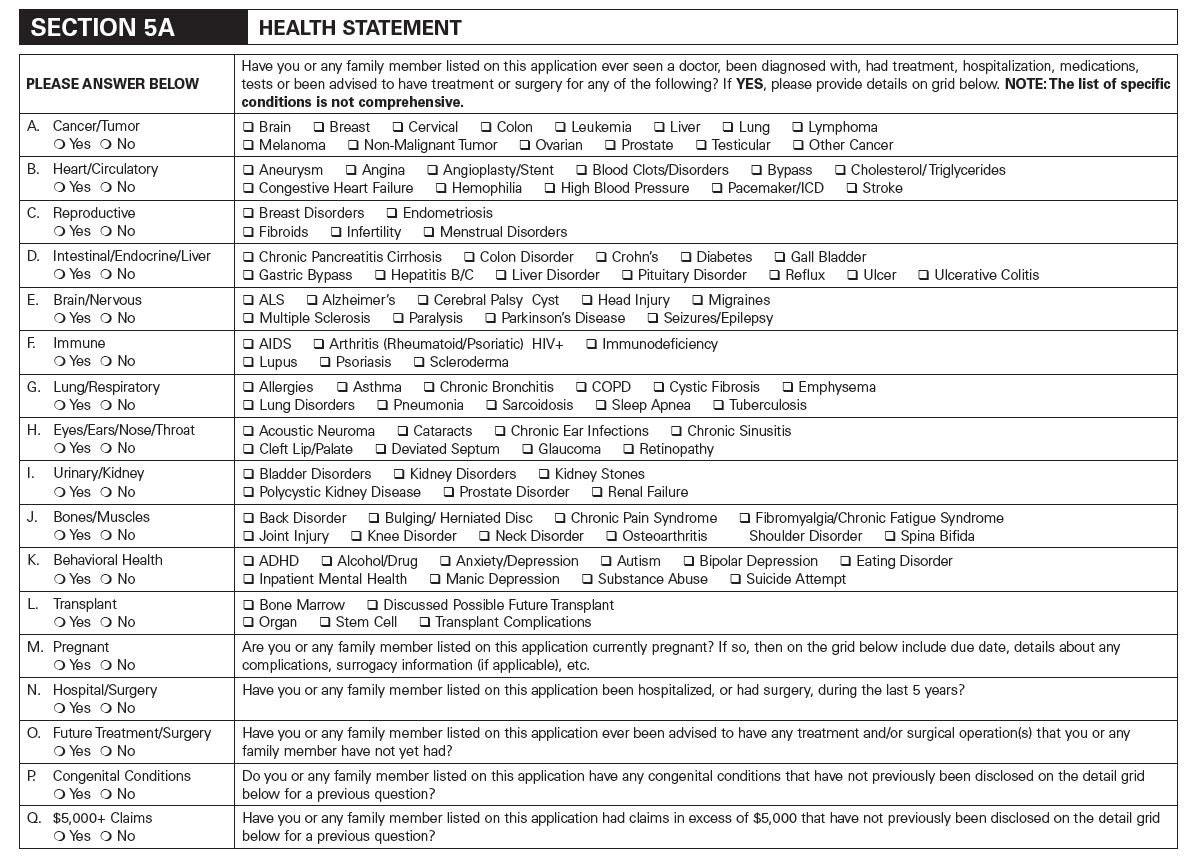 As far as I can tell, if these actually go through, they would turn the already-partly crippled 3-Legged Stool into something like this: 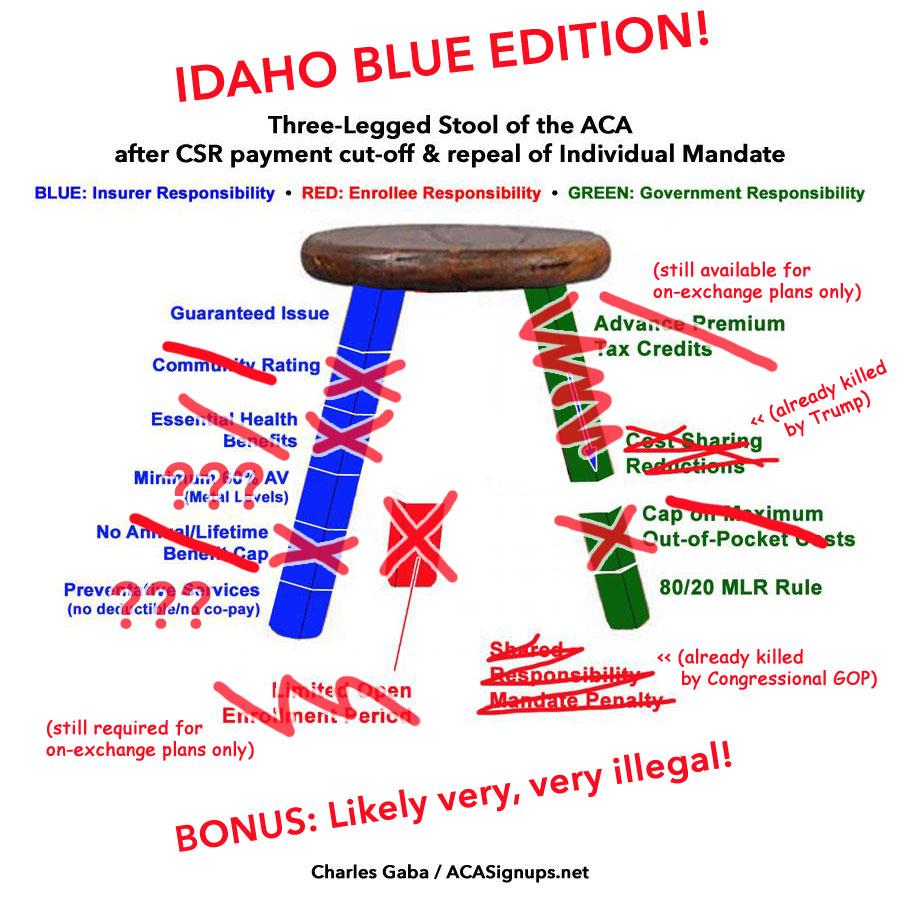