Brace yourselves: Not ALL of the "Sabotage" measures in the Secret Memo are necessarily sabotage.

Over at Politico, reporter Jennifer Haberkorn has a pretty impressive scoop about an internal Trump Administration memo from last March which lays out a list of 10 different executive measures Trump planned on taking to muck around with the ACA exchanges and the 2018 Open Enrollment Period:

The March 23 document, which had not been public until now, reveals that while the effort to scrap Obamacare often looked chaotic, top officials had actually developed an elaborate plan to undermine the law — regardless of whether Congress repealed it.

Top administration officials had always said they would eradicate the law through both legislative and executive actions, but never provided the public with anything close to the detailed blueprint shared with the members of the House Freedom Caucus, whose confidence — and votes — President Donald Trump was trying to win at the time. The blueprint, built off the executive order to minimize Obamacare’s “economic burden,” that Trump signed just hours after taking the oath of office, shows just how advanced the administration’s plans were to unwind the law — plans that would become far more important after the legislative efforts to repeal Obamacare failed.

...The document lists 10 executive actions the Trump administration planned to take to “improve the individual and small group markets most harmed by Obamacare.”

OK, this sounds bad, so let's take a look at the memo: 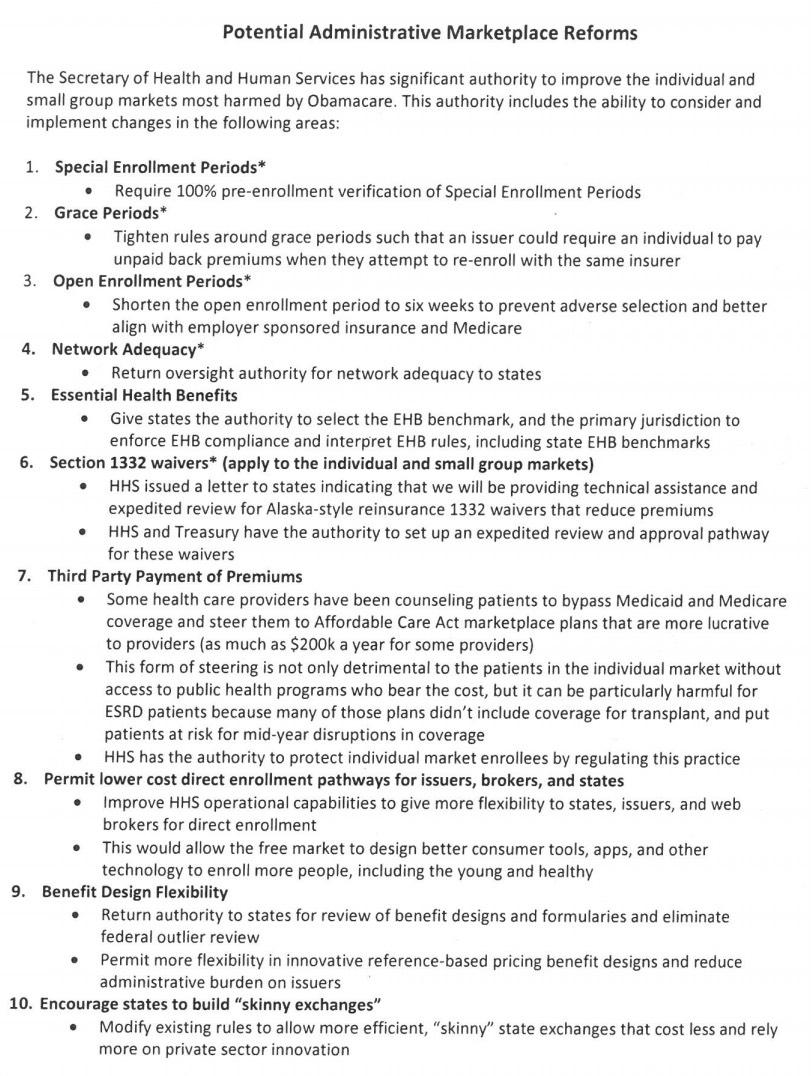 Some of these I've written about before...

I've probably also made references to the other fours, but the point is that some of these are actually...not necessarily terrible ideas.

It's a mixed bag, really: Some are terrible, some are actually decent and some...well, some are a matter of how they're implemented and/or your point of view about what's "beneficial" or "damaging".

Now, some of these DO set off major red flags, particularly items #4, 5, 9 and 10. "Returning authority to the states" for things like network adequacy, EHB requirements, "benefit design flexibility" and so forth is GOP-speak for "blue states will actually keep the regulations up to snuff while red states get to basically blow them off altogether".

However...consider the first item, Special Enrollment Period (SEP) verification: As I wrote nearly two years ago, I'm actually on the record as supporting a requirement that people who want to enroll during the off-season provide some sort of basic verification that they're eligible--uploading a photo of their marriage license, employment termination notice, release from prison form or whatever, to make sure they're not trying to "game the system" as the insurance companies have insisted is happening in a widespread fashion.

Last year the Obama Admin. HHS Dept. started this process by requiring official documentation of some SEP enrollees--I don't know if it was done randomly, or on an every-other-one basis or what, but the point is they were already in the process of ramping up documentation requirements long before Trump took over (this is from February 2016):

As we begin work to implement the new process, CMS will solicit feedback from consumer advocates, insurers and other stakeholders over the next few weeks on verification requirements, processes and acceptable documentation. We welcome feedback and suggestions, which can be sent to SEP@cms.hhs.gov.

Aside from the fact that the Obama Administration was already ramping this up, there's a reason they were proceeding with caution on it: It could very well backfire, as explained by Families USA analysts Elizabeth Hagan and Kara Nester back in March 2016:

Again, while the details of the new SEP process have not been decided, we are concerned that people experiencing these life changes will face significant barriers when trying to prove eligibility for enrollment to the Marketplace.

Changes in SEP procedures have been created to weed out people who insurers have claimed have abused and misused SEPS. However, to date, there has been no evidence made public that consumers are actually “gaming” the system. As noted above, consumers are largely unaware of SEPs as it is and are far less likely to know how to fraudulently maneuver the current SEP enrollment process.

...Insurers have also claimed that people enrolling through SEPs tend to be sicker than those enrolling during the regular enrollment period, thus leading to adverse selection that subsequently drives up premiums. However, data suggests that the opposite is truefor those eligible for SEPs: The people eligible for SEPs are more likely to between the ages of 18 and 34—a relatively healthy demographic with lower health care costs—because they are more likely to experience qualifying life events and lose coverage throughout the year.

We believe the new process to confirm people’s eligibility that CMS is creating could actually increase adverse selection because those who are sick and need coverage the most will be the most motivated to jump through the new hoops required to enroll in coverage. Meanwhile, young people, who are often eligible for SEPs and help to balance the risk pool, will be dissuaded from applying for coverage.

In other words, when it comes to the verification process, implementation of the rule is vitally important--if you make it too much of a pain in the ass for people to provide documentation, the only ones who will bother doing so will be those who are the most desperate for coverage...namely, expensive-to-treat sick people. Healthy people who were thinking about using a recent life change to take advantage of an SEP will be less likely to bother doing so (especially now that the mandate penalty has been repealed, effective 2019). Result? Instead of improving the risk pool, you've now made it worse.

Another example is the half-length Open Enrollment Period. Again, the Obama HHS was already planning on cutting open enrollment at HealthCare.Gov down to 6 weeks starting next year (OE6) long before Trump came along; all Tom Price did was bump that date up a year.

HOWEVER, I'm fairly certain that if Hillary Clinton was President, not only would her HHS Dept. have stuck with the 3-month OEP for 2018, they would have made sure there was a massive marketing/outreach/education blitz when they did implement the shorter period for 2019 to make sure people knew about the shortened deadline, instead of slashing the ad budget by 90% and the outreach budget by 40% (which absolutely WAS blatant sabotage...and which, oddly, was not on the secret March 23rd memo).

In addition, it would have been more of a controlled experiment under those circumstances--analysts could have looked at the 13-week periods which preceeded it and compared them against the 6-week period in 2019, likely without any other significant changes or disruptions to muddy the waters.

Instead, this year we had the CSR cut-off, the GOP's endless repeal/replace onslaught, and Donald Trump tweeting about "blowing it up!" and "letting it explode" every five minutes. As a result, there's absolutely no way of running a true apples-to-apples comparison to see whether cutting the period in half helped or hurt the risk pool.

The point is that just because the "same idea" is implemented by two different administrations doesn't mean that the way it's implemented will be the same; it could turn out very differently.

There's also one more factor to consider here: Trump is so incompetent that sometimes he ends up screwing up his own sabotage efforts. A perfect example of this would be the timing of Trump's CSR reimbursement cut-off. As David Anderson astutely noted back in September, given that Trump's goal in pulling the CSR plug was specifically to damage the ACA market as much as possible, he couldn't have picked a worse time to make his move:

Insurers have priced in not being paid Cost Sharing Reduction subsidies. Smart insurers and smart states are splitting the on-Exchange from the off-Exchange market under a variety of loading circumstances. The threat of not paying CSR was a threat against mid-2017 exits by insurers and not the threat of exits in 2018 by insurers that have decided to stick around with the assumption that CSR won’t be paid.

If CSR payments arrive in the insurers’ accounts on September 20th, the threat of mid-year exits effectively disappears. And at that point, the insurers will price as if CSR will not be paid and there is a $192 billion dollar pot of new money that totally changes budget neutrality calculations for waivers and federal budgetary policy. From this new pot of money, a $92 billion dollar stabilization and change fund could be combined with a $100 billion cut from Obamacare which would allow everyone to claim a win.

In short, Trump waited too long to pull the plug--if he had done so at any point in January through, say, July or so, it would have been devastating, which is why I was screaming from the rooftops about it at the time. But he waited until October to do so...which meant the carriers already had ample time to bake his threat into their 2018 pricing, and to go even further by cleverly Silver Loading the CSR cost, resulting in a better deal for most enrollees this year.

Is deliberate sabotage still sabotage if it ends up backfiring on the saboteur? I'm not sure, but that's pretty much what happened here.

As for item #10, "Skinny Exchanges", I haven't the slightest idea what that was supposed to look like, although someone on Twitter suggested it might refer to something lke Marco Rubio's hilariously EPIC FAIL! boondoggle, "Florida Health Options" from a few years back. If so, God help us all.

AS AN ASIDE: Florida Health Choices was finally, quietly, mercifully shut down back in August, although oddly the website still seems to be online and certainly looks like it's still being kept up to date. Weird. This waste of time managed to suck up $2 million in taxpayer dollars over the years while only enrolling a grand total of 712 enrollees, or around $2,800 per customer...or more than 11x as much per enrollee as HealthCare.Gov. Then again, this is far better than the $30,000 per enrollee it was averaging back in 2015...