A couple of weeks ago I reported that MNsure, Minnesota's ACA exchange, had achieved 108.5K QHP selections, putting them within 1,500 enrollments of breaking their all-time record set last year.

Minnesotans benefiting from tax credits averaging over $7,000 per year
January 2, 2018

“Minnesotans are saving an average of over $7,000 per year from tax credits when purchasing coverage through MNsure,” said Allison O’Toole, MNsure CEO. “This is real money for Minnesota families, and can help make the unaffordable, affordable.”

“Minnesotans have through January 14 to shop, compare and save on their health coverage, so we are urging all Minnesotans to visit MNsure.org to see if they qualify for financial assistance. Free in-person help is also available across Minnesota for people who need it,” said O'Toole.

MNsure is the only place where Minnesotans can get federal tax credits.

The 2018 open enrollment period is November 1, 2017 to January 14, 2018. Ninety-six percent of Minnesotans have health coverage--the highest percentage in state history. This year, an individual earning up to $48,240 a year, or a family of four earning up to $98,400 a year could qualify. More information can be found at MNsure.org.

However, according to the exchange itself, their final tally last year was 117,654. The reason for the discrepancy appears to be the week-long "overtime" enrollment period which they tacked on last year due to an unusual, patched-together 25% rebate offer for unsubsidized enrollees, which added another 7,680.

Adding to the confusion, thanks to Peter Benner for pointing me towards MNsure's BoD meeting slideshow (see below) which shows that the larger number includes 2,844 SHOP enrollees (that's the ACA's small business enrollment program, which I count separately, as do most other reports). When you lop those off, the individual market QHP total is actually 114,810.

In my book, that means MNsure still has around 4,800 to go to beat their record, but the official CMS ASPE report is the one which everyone else tends to go by, so by that standard, yep, MNsure has indeed already broken their record. Of course, when the final 12 days of enrollments are added, there's a good chance they'll break 115K anyway...and possibly even reach 118K, making the confusion moot. 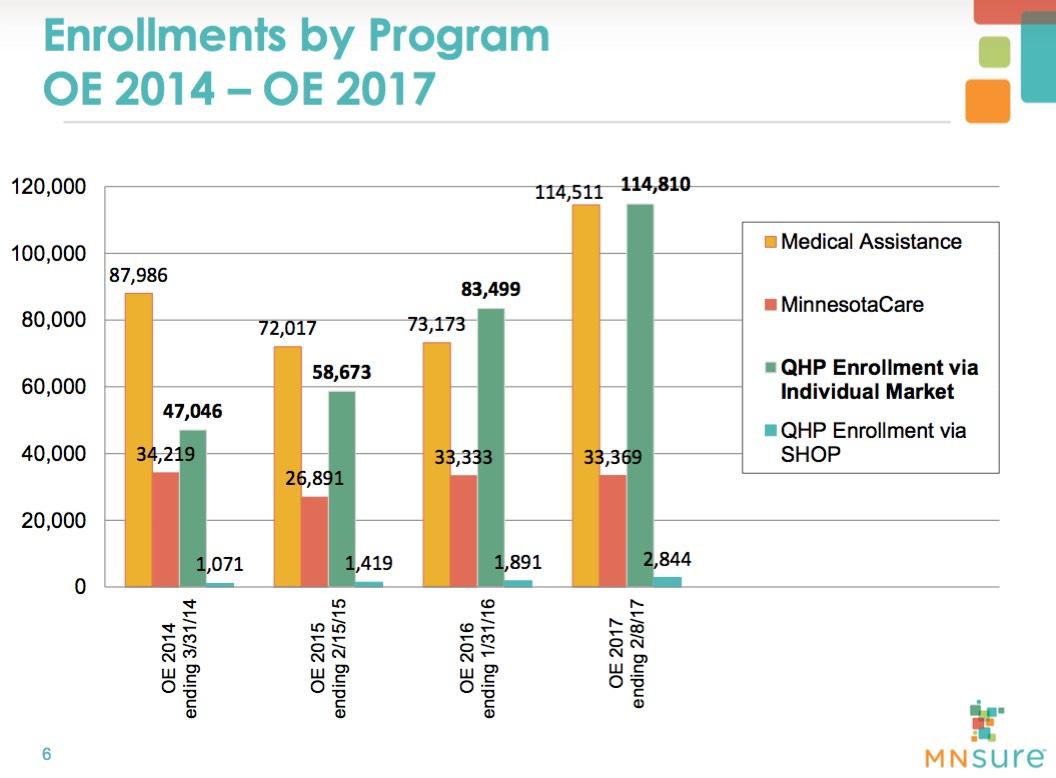