Collectively, these states (+DC) represent around 95.5 million people, or nearly 30% of the entire U.S. population.

Remember Hurricanes Harvey and Irma? Well, residents of five southern states do...and CMS issued a notice back in September that people who were residents of those states/areas when the hurricanes hit are eligible for a Special Enrollment Period between December 16th - December 31st. I'm not sure if the policies they enroll in would go into effect starting January 1st or February 1st, but the point is that these folks can still #GetCovered for 2018.

At the time, it looked like the eligible areas included 42 counties in Texas, 48 counties in Florida (most of the state), 7 counties in Georgia, and parts of Louisiana and South Carolina, although they don't seem to have any actual counties listed. However, according to Hannah Recht of Bloomberg News, the eligible areas include all of Florida, Georgia and South Carolina. I'm a bit confused about this seeming discrepancy (plus, I thought that all of Louisiana was hit hard, while it was my understanding that South Carolina and Georgia were only impacted lightly, though of course I could be wrong about this).

Note: This Miami Herald article confirms that it's all 67 counties in Florida...and Wesley Sanders (a finance director for a Georgia-based insurer) and Louise Norris (healthcare wonk and broker from Colorado) have confirmed the full-state status of GA and SC as well:

Can confirm it is the whole state of Georgia.

And South Carolina ended up with the whole state eligible for public assistance too, so it looks like statewide SEP there too: https://t.co/eWsEFMYXFk

In other words, that's another 35.4 million people...plus however many live in the listed counties in TX and LA. I'm not gonna go through and tally the population of every TX county, but I know the greater Houston region has over 6.3 million residents. Beaumont-Port Arthur has over 400,000 residents. Overall, I'm assuming that easily 8-9 million people live in those counties, so let's call it 44 million people total.

UPDATE: OK, apparently I was way off:

If you were affected by Hurricane Harvey, you still have time to purchase a health insurance plan for 2018. 15.8 million Texans, or 60% of the state’s population, live in counties eligible for the hurricane special enrollment period: https://t.co/MQHhNNAMTU #GetCovered #ACA pic.twitter.com/895FVWTVxz

OK, so it looks like I underestimated Texas by a good 7 million people.

While I was at it, I decided to look up the actual populations of the Louisiana parishes as well, and came up with a total of  1.27 million.

Add them together and that's around 52.5 million people in designated hurricane zones who are still eligible to enroll through 12/31/17.

Well over 200,000 Puerto Ricans have moved out since Hurricane Maria devastated the island. Most have transferred to Florida, with others scattered across other states. I'm assuming it's closer to a quarter million by now. The vast bulk of them are elgible for a 60-day Special Enrollment Period (SEP)...not necessarily because of the hurricane itself, but because they legally moved. Including these folks is a bit questionable since anyone who moves to a different rating area anytime throughout the year qualifies for an SEP anyway, but I think it counts. Of course, some of these 200K have likely already enrolled in Florida/etc. during the normal Open Enrollment Period anyway.

Throw in a few other oddball situations and it's safe to say that at least 145 153 million Americans, or 45% 48% of the population is still eligible to enroll...at least for another week or so.

I have an email in to CCIIO & I'm on hold w/ @HealthCareGov to confirm, but it looks like all of Alabama + 7 counties in Mississippi also have hurricane-related SEP thru 12/31 https://t.co/aEbG6wuHlN can anyone confirm? @hannah_recht @charles_gaba @larry_levitt @EyeOnInsurance

(Greene County is on this map for disaster designation DR-3450)

NOTE: The above list is subject to change, and there appear to be some discrepancies between the information available from CMS and from FEMA. We’re still working to confirm which counties are eligible for a special enrollment period, and will update this page as we get more information. If in doubt, contact the exchange and see if you can enroll. But even in areas where it’s available, the special enrollment period ends December 31, 2017, so don’t delay.

There also seems to be some confusion about whether or not you simply have to live/have lived in any of the listed states/counties or if you have to actually provide some sort of proof that your residence/property was damaged (?):

I'm hearing they are asking beyond county info. Specifically, flood damage. Anyone else getting this?

I suppose it depends on how you define "affected"? https://t.co/MWvV9TP6UE The non-subjective part of it says you have to have lived in an area declared eligible for public or individual assistance from FEMA. Still waiting for CMS clarification @wcsanders @wcsanders pic.twitter.com/c25nmki9rO

It DOESN'T say "and you had a problem". I live in Dallas and have yet to figure out why Dallas County is listed.

They just say "if they experienced an SEP qualifying event" and lived in those areas. Further up the page, they say if you were "affected by a hurricane-related weather event." That's pretty subjective though.

If you visit HealthCare.Gov, there's a little overlay link at the top which reads:

It sounds like some confusion at HC.gov's end as well, so I'd strongly recommend people double-check to be sure.

Assuming both the Alabama and Mississippi additions are accurate, that means I have to tack on another 4.86 million (Alabama) + 481,300 (7 counties in Mississippi) = 5.34 million people to the grand total, or over 158 million Americans...roughly 49% of the U.S. population.

UPDATE: Good grief. MAINE residents may qualify for an extended enrollment period now as well, due to a nasty wind storm last fall. However, Maine's status seems to be more of a "case by case basis" situation as opposed to the hurricane's "no questions asked" policy, so I'm not gonna add it to the infographic.

UPDATE 12/20/17: (sigh) Thanks to Hannah Recht for confirming the following:

Hurricane Nate related eligibility also extends the SEP to residents of additional Louisiana counties, to a total of 33 LA counties.

When I overlap the 19 parishes listed in the Hurricane Nate list with the ones I already had listed, I only come up with 32 LA parishes, but whatever. The population of these additional counties adds another 1.56 million people to the total, bringing it up to nearly 161 million Americans...or almost precisely 50% of the total population.

I've updated the infographic AGAIN to reflect the latest updates: 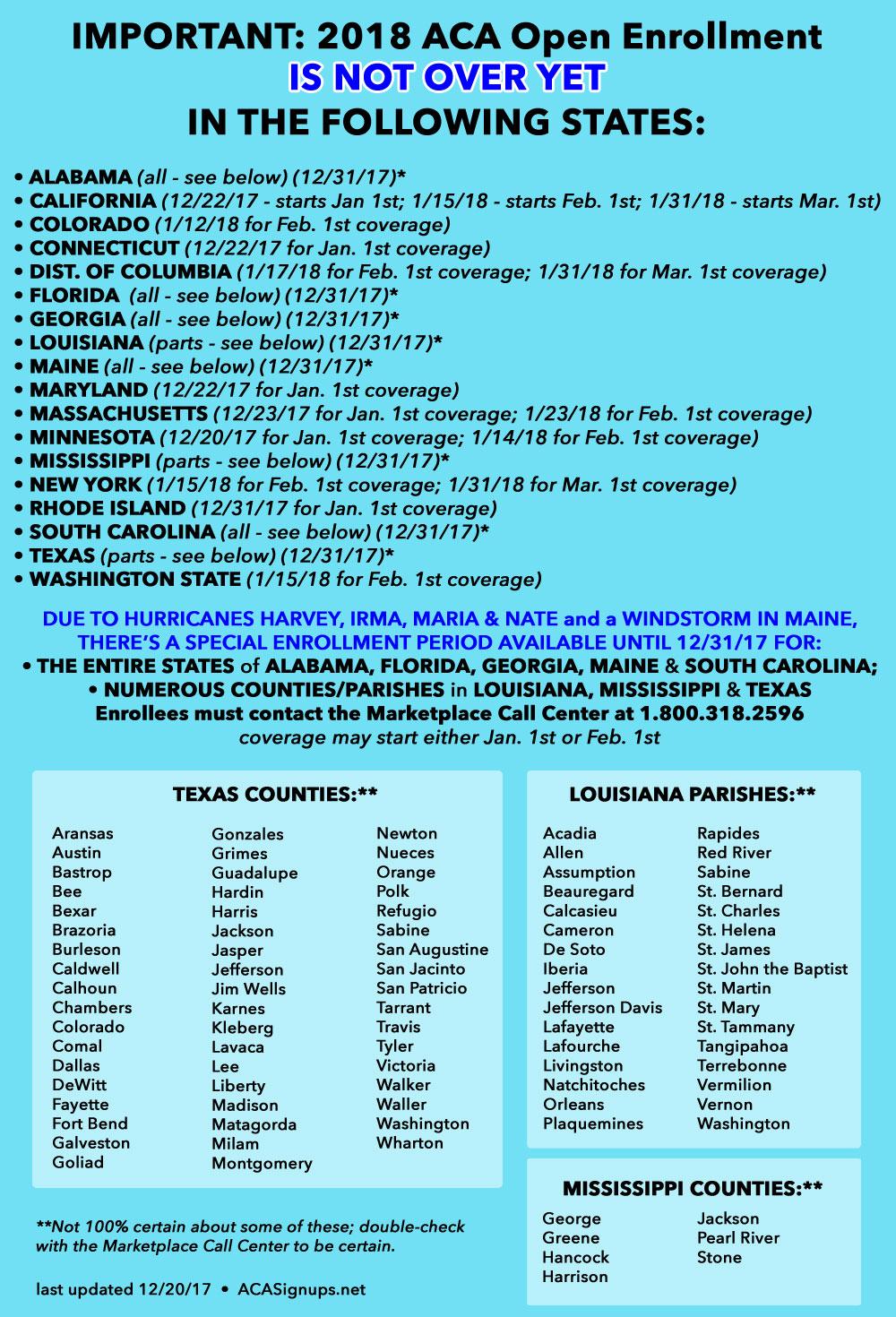