Coordinated Care Corp. has agreed to a consent order detailing steps it must take to fix its provider network deficiencies and other ongoing issues. The company was fined $1.5 million with $1 million suspended, pending no further violations over the next two years.

In particular, Coordinated Care admitted to not having enough anesthesiologists in King, Snohomish, Pierce and Spokane counties. According to the company’s own data, its provider network is also seriously deficient in other categories of providers, including immunology, dermatology, and rheumatology.

With the consent order in place, the order instructing the company to stop all sales is canceled.

Anyone who bought Coordinated Care plans through Washington state’s Exchange after Dec. 12 will have those policies effect for 2018.

Kreidler’s office received more than 140 complaints from Coordinated Care enrollees this year who have had difficulty with their coverage. This included accessing in-network providers and receiving surprise medical bills.

All health insurers are required to monitor their provider networks and identify problems and report them to the insurance commissioner’s office, including how consumers can access those services.

In investigating the consumer complaints, Kreidler’s office has worked with Coordinated Care since mid-May and instructed the company to correct its network and ensure that people are not wrongly charged for covered services.

“I’m pleased that we have reached agreement with Coordinated Care to correct its inadequacies,” said Kreidler. “They understand the seriousness of the violations and made a commitment today to correct them. We will be monitoring the company very closely to make sure that policyholders are protected and they receive the coverage they’ve paid for.”

Anyone with coverage from Coordinated Care who has received a surprise medical bill from the company should contact the insurance commissioner's office.

Coordinated Care has the third-largest market share in Washington’s Exchange, with 38,000 people enrolled as of September 2017.

Centene, which has been expanding like mad into the counties being abandoned by other carriers (Humana, Aetna, Anthem, etc) continues to fill in the "bare counties", agreeing to cover 14 counties in Nevada which were otherwise at risk of not having any carriers offering coverage on the ACA individual exchange:

Only two very small counties in the United States remain without an Obamacare insurer planning to sell health coverage next year after Centene on Tuesday said it will offer coverage in Nevada's remaining 14 "bare" counties in 2018.

There are fewer than 400 people who currently buy Obamacare coverage though the federal HealthCare.gov marketplace in the two counties, in Ohio and Wisconsin, that remain at risk of not having an insurer next year, according to a map maintained by the Kaiser Family Foundation.

"This is not even a fraction of a percent of the people" in the U.S., said Cynthia Cox, associate director for Kaiser's Program for the Study of Health Reform and Private Insurance.

In late June, according to federal health officials, there were 49 counties nationally that did not have an insurer committed to sell plans on a government-run Obamacare marketplace in 2018.

But since then, the number has fallen as insurers have agreed to offer coverage in most of those areas.

Now, to be honest, I know almost nothing about Centene (which also operates under the names Ambetter and Celtic...for God's sake, guys, pick a name and stick with it...) in terms of network size/strength, customer service, pricing and so forth. They may be great, they may stink. But at least they're covering the gaps, and they've decided to zig when other carriers are zagging. I gotta figure 2018 will either be their best or worst year ever.

@charles_gaba something is going sideways in WA state. We got this yesterday. They are an only carrier in several counties. pic.twitter.com/uYi6c6vvon 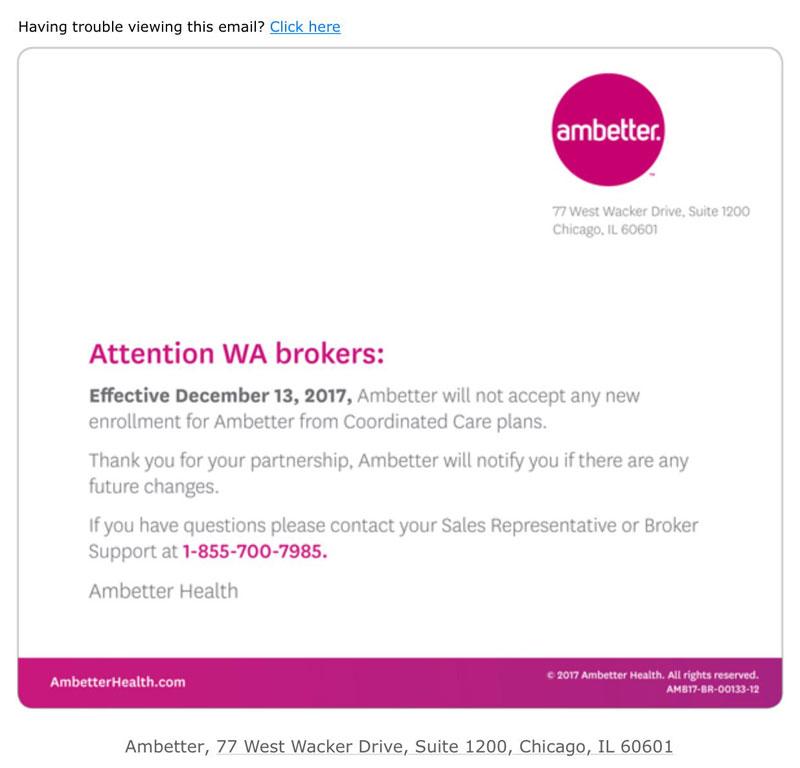 Unfortunately, I had a can't-miss website client meeting this morning (yes, I'm still officially a website developer, even if I sometimes forget that myself these days), so I asked Rebecca Stob to chime in, seeing how she's an insurance actuary in Washington State:

Wesley Sanders chimed in as well...

It would seem crazy the state DOI would consent to them suspending enrollments given the vast resources of the parent company.

They aren't accepting any more. OIC has issued a cease and desist.https://t.co/9YK6n39PSU

Here's the story he linked to:

An insurance provider that tens of thousands of people rely on in Washington is being told to cease and desist by the Insurance Commissioner. The state says it is taking this extraordinary step after receiving complaints about the Coordinated Care Corporation which offers a plan called Ambetter from Coordinated Care.

Stephanie Marquis, a spokesperson with the Office of the Insurance Commissioner, sent a statement Thursday:

As you may be aware, Insurance Commissioner Mike Kreidler issued a cease-and-desist order to Coordinated Care Corp. to stop all sales of individual health plans in Washington state, effective Dec. 12.

He took this extraordinary step in response to the more than 140 enrollees who’ve complained to his office regarding the company’s lack of an adequate provider network, the surprise bills many have received because of these issues, and the company’s failure to correct its serious deficiencies.

The company must honor all coverage sold during 2017 and any 2018 policies sold before the order took effect.

And finally, at 1:07pm today, Zachery Tracery of Bloomberg News filled in the blanks:

Centene Corp. halted sales of health insurance plans in Washington State after regulators found the company failed to cover enough doctors and other care providers, threatening to leave some counties with no Obamacare insurance options.

...The halt is a setback for Centene, which has been rapidly expanding in Obamacare, relying on a strategy of offering consumers a limited choice of doctors and hospitals, in exchange for a lower up-front premium. Bloomberg found earlier this year that some Centene customers faced difficulties visiting their preferred hospitals and doctors in the insurer’s Affordable Care Act plans. In their Dec. 12 order, Washington regulators said the problem was systemic.

(This is a serious issue for thousands of people, so I'll avoid making any bad jokes about "well, that is about as limited as you can get, I suppose...")

Centene’s plans remained available on the state’s insurance-shopping website, but it wasn’t clear if the enrollments would be honored, and a spokesman for the exchange said he couldn’t immediately provide more information.

...“We’re going to enroll people as long as the exchange stays open,” said Matt McColm, a Washington State insurance broker. “We’re going to tell our customers straight up, these plans might not be honored. If they’re not honored, we’ll have to figure something out.”

(Note: Matt McColm is also the guy who Tweeted the heads up to me about this in the first place).

Ugh. If this is limited to Washington State, it's bad...but if Centene/Ambetter/Celtic sucks this badly nationally, this could be a hell of a mess.

The only silver lining here is that unlike most states, Washington residents still have another full month to #GetCovered, although their coverage won't start until February 1st if they enroll after tonight.