Mea Culpa: Looks like I misunderstood the CBO's Mandate Repeal projections; it still sucks, just not as much as I thought

Last week the Congressional Budget Office issued an updated projection about what they expect the 10-year impact would be on both healthcare coverage levels and federal budget savings of repealing the ACA's individual mandate penalty.

I want to focus on one portion of their analysis which I appear to have seriously misinterpreted: The projected impact on unsubsidized individual market premiums over time.

Here's how they actually worded it:

Many headlines and tweets over the past week made it sound like the CBO was projecting rates to only increase by 10% total...which, if true, would actually be fantastic news, since 10% spread out over 10 years would be an increase of only about 1% per year, which is lower than general inflation!

The reality is that the 10% increase would be on top of whatever the CBO was already expecting premiums to increase by with the mandate penalty in place and being enforced due to other causes (normal inflation, an aging population, prescription drug price increases and so on)...in other words, "relative to baseline projections".

My original interpretation of this was that they're projection an additional 10 percentage points per year beyond whatever they already expected rates to go up by, and I posted a thread or two on Twitter explaining what that would look like assuming the baseline projection was for either 7% or 10% per year:

A few people on Twitter (and here) asked me if I was certain about this, since depending on your interpretation of the CBO's wording, it could also be taken to mean a one-time 10% increase only. I was pretty sure I was reading it correctly, but Loren Adler of the Brookings Institute convinced me that these folks are correct, and I was wrong:

The CBO estimate on the mandate is just that average nongroup market premiums would be roughly 10% higher in any given year, not that annual growth would be 10%-points faster.

So it is on top of expected premiums under current law, but it's just that they're 10% higher in each year than they otherwise would be

Yes, premiums would be 10% higher in each year relative to CBO baseline projections. But premium growth wouldn't increase by this amount.

It's made less clear cut in this one precisely when the increase happens, but it's framed as more or less happening immediately. So there's a one-time 10% premium hike effectively.

It's not worded great in this report. Normally they word it more clearly.

In other words, regardless of how much the CBO was already projecting rates to go up with the mandate, they're actually saying they'd expect an additional 10% one-time increase the first year that the mandate is repealed...which would translate into some additional rate increase over the next decade, but not nearly as dramatic of one as I thought they meant.

Here's how it would actually look under all three scenarios, assuming you start out with a policy costing $500/month in 2018: 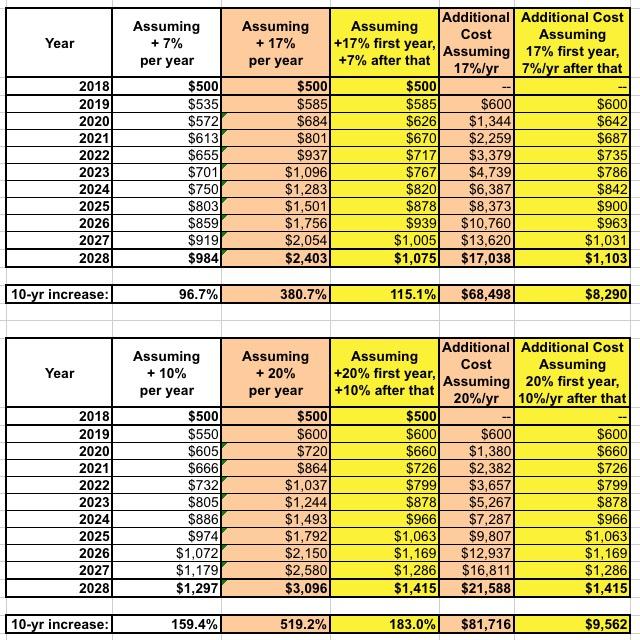 In the 7% scenario, an unsubsidized enrollee who stuck with the same policy (at full price) for all 10 years would end up paying an additional $8,300 in premiums over 10 years; in the 10% scenario it'd be an additional $9,600 paid. Both of these suck royally, of course, but neither would be nearly as dramatically horrific as the 17% / 20% per year outcome, which would mean $60,000 - 80,000 per year in additional premium costs.

In other words, I appear to have messed up royally on this, for which I apologize profusely...however, the actual CBO projections are still pretty sucky for unsubsidized enrollees...which is exactly why they're also assuming that the unsubsidized individual market would pretty much dry up if the mandate penalty is repealed.