As I noted Wednesday morning, the Congressional Budget Office released an report with updated estimates of what they figure the budget and healthcare coverage impact of repealing the ACA's Individual Mandate Penalty would be over the next decade. Their conclusions?

The Results of CBO and JCT’s Analysis CBO and JCT estimate that repealing that mandate starting in 2019—and making no other changes to current law—would have the following effects:

The only number the GOP cares about, of course, is the first one: $338 billion in projected deficit savings over the next decade. They're obsessed with providing massive tax cuts to the superrich, but doing so would jack up the deficit a lot, so they're hunting for just about anything which will knock those losses down a peg or two to squeak in under the $1.5 TRILLION wire that they're apparently allowed to get away with for whatever Congressional reasons. Their earlier projection, from back in 2016, was that repealing the mandate would save even more: Around $416 billion. The Republicans are a bit cranky about "losing" $78 billion in savings from the update, but whatever.

Now, on the surface, you would think that repealing the mandate would actually cost the federal government more money, for two reasons:

In other words, I would imagine that within a few years, nearly 100% of the individual market (which I figure would settle somewhere around 12-13 million people total) would be receiving APTC assistance (plus CSR for the most part), and the amount of APTC/CSR each enrollee would skyrocket.

The CBO agrees completely, but goes further than this...and that's where both the additional coverage losses and the budget savings come in. Here's the new/updated baseline to their overall coverage projections from June 2017, which the mandate repeal analysis is supposed to be based on:

See Congressional Budget Office, An Update to the Budget and Economic Outlook: 2017 to 2027 (June 2017). For additional information about the baseline presented in that report, see Federal Subsidies for Health Insurance Coverage for People Under Age 65: 2017 to 2027 (September 2017). 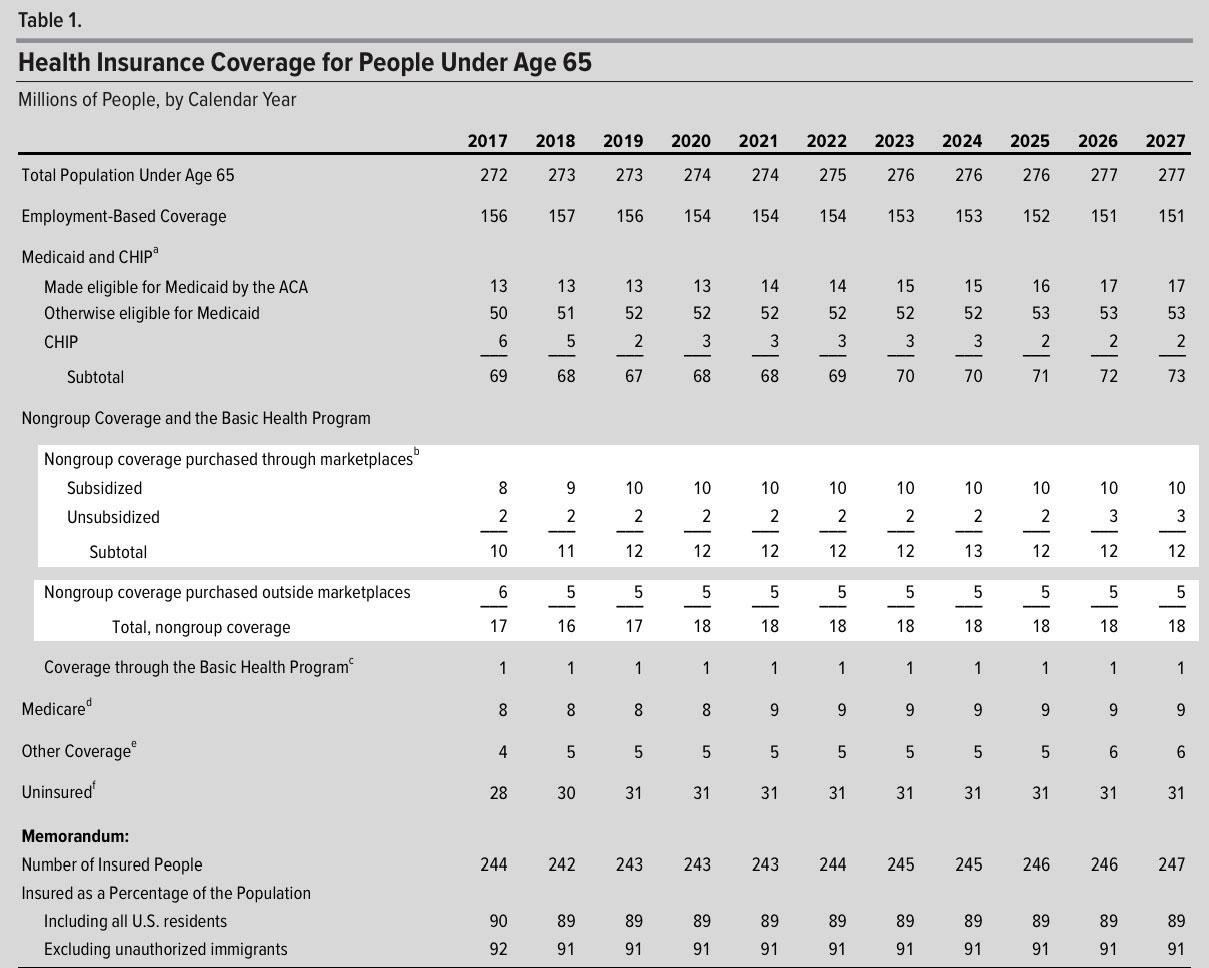 OK, so under current law (that is, the ACA as it stands today, the CBO now projects that the total individual market pretty much hangs around the 17-18 million level for the next decade, neither growing nor shrinking by much. Fair enough.

It's important to note that the June projection assumed that CSR reimbursement payments would continue as normal...Donald Trump didn't actually pull the plug on them until last month. The CBO addresses this here:

Yup, apparently they're legally required to assume the CSR payments will continue to be made even though they've already been cut off and are highly unlikely to be made anytime soon at this point. Crazyness.

In any event, that brings me to their overall "big picture" conclusion:

Despite the uncertainty, some effects of this policy are clear: For instance, the federal deficit would be many billions of dollars lower than under current law, and the number of uninsured people would be millions higher.

So let's see what they concluded the actual coverage impact would be: 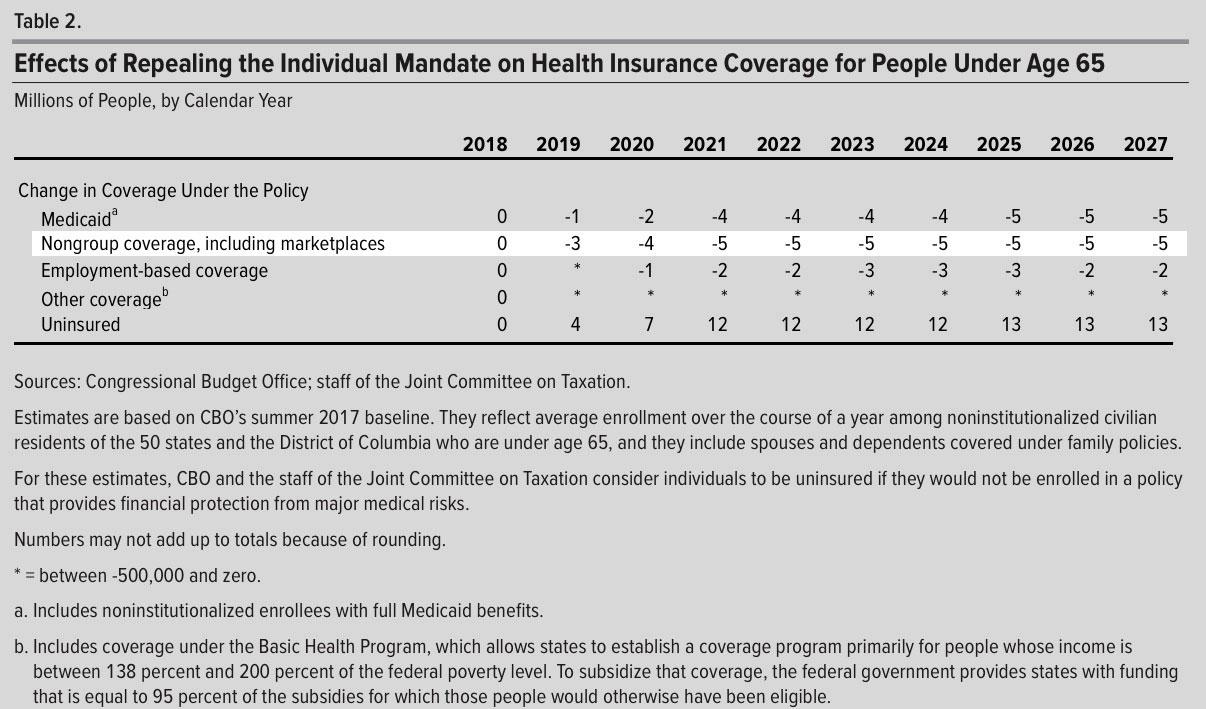 Huh. OK, they do note a substantial drop in individual market enrollment, to the tune of 5 million people; as I noted above, I'd expect the subsidized individual market to settle at around 12-13 million myself, so this sounds about right.

However, they also assume that Medicaid and Employment-based coverage would drop by 5 million and 2 million respectively (they actually have the total net loss at around 13 million...the CBO is big on rounding everything off to the nearest million, so fractions tend to disappear and reappear when you add up the numbers). here's a combined summary view:

According to the earlier, 2016 analysis:

...Under this option [repealing the mandate penalty only], the loss of penalty revenue would be more than offset by the savings from reduced spending on federal subsidies for health insurance coverage.

This option would decrease outlays by $381 billion between 2018 and 2026, CBO and JCT estimate. Most of that amount (about $279 billion) would come from a drop in Medicaid enrollment. In addition, between 2018 and 2026, federal spending on subsidies for insurance purchased through the marketplaces would decline by $96 billion. (Those subsidies fall into two categories: those that cover a portion of participants’ health insurance premiums and those that reduce out-of-pocket payments required under insurance policies.) Other effects would account for the remaining $6 billion reduction in outlays.

CBO and JCT estimate that this option would increase revenues by $35 billion between 2018 and 2026. The removal of the mandate would increase tax revenues by about $56 billion because reductions in employment based coverage would result in more taxable compensation for employees. Revenues would increase by an additional $16 billion because a portion of the decrease in marketplace subsidies for health insurance premiums would be provided in the form of increases in recipients’ tax payments. (The subsidies for health insurance premiums are structured as refundable tax credits: The portions that exceed taxpayers’ other income tax liabilities are classified as outlays; those that reduce tax payments are classified as reductions in revenues.) The increase in revenues over the period from 2018 to 2026 would be partially offset by a $35 billion loss from eliminating the individual mandate’s penalties. Other effects would account for an additional $1 billion reduction in revenues.

As for Medicaid, I had a tougher time believing that 5 million Medicaid enrollees would voluntarily drop out of what's effectively free (or near-free) healthcare coverage, but as Dave and Andrew noted:

Medicaid is mostly reverse Woodworker...Penalty definitely motivates Medicaid enrollees. And with new barriers to enrollment thrown up, including more frequent redeterminations, fewer enroll or reenroll. It's a lot of hassle --- annual or semi-annual redeterminations, income tests, asset tests; it's a pain in the ass.

And this, of course, is exactly why CMS head Seema Verma, along with lots of Republican Governors and state legislators keep pushing so hard for Medicaid to include strict work requirements even though they're virtually pointless, since the vast majority of Medicaid enrollees already work, are too ill to do so, are students or are caregivers for some other family member. It's needless paperwork with the sole purpose being to discourage people from enrolling (and, in a mandate repeal scenario, to actively push people off of Medicaid even though that leaves them vulnerable to massive healthcare expenses.

In any event, here's what the CBO now thinks would happen to revenues and expenses if the mandate were repealed: 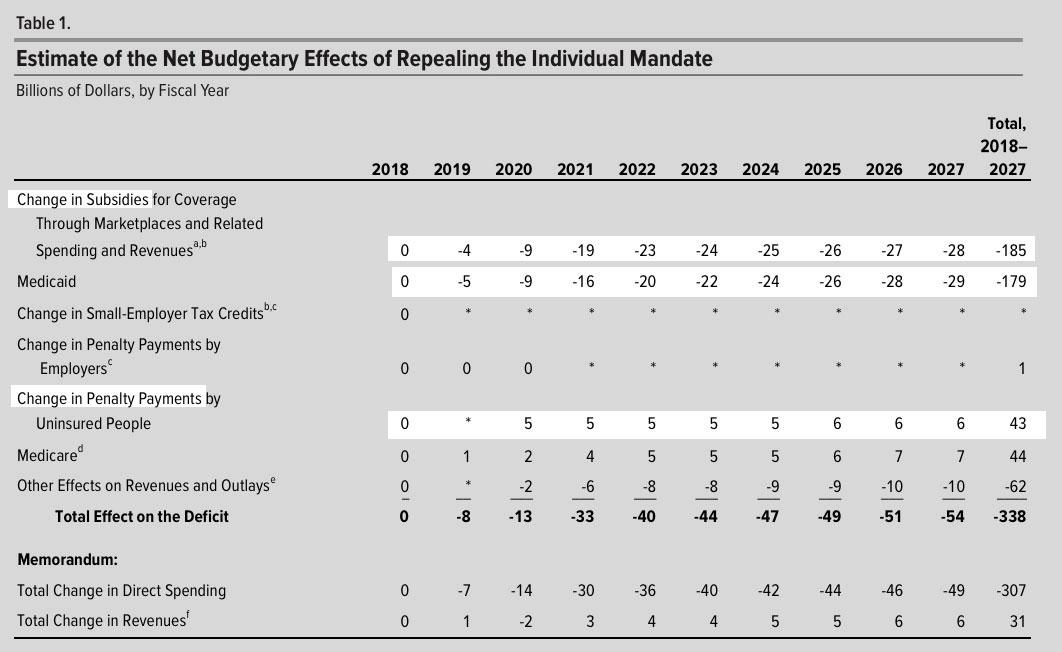 They're assuming that if the mandate isn't repealed, total APTC assistance from 2018 - 2027 would be $531 billion, and that this would drop by about 1/3 ($185 billion). Since they also openly state that the worsened risk pool would also cause premiums to increase to the tune of around an additional 10% per year over the decade (thus increasing APTC substantially), the only way that's possible is if they honestly think that a big chunk of the 5 million dropping coverage comes from subsidized enrollees, not unsubsidized. This...makes no sense to me. Yes, some subsidized people might drop coverage as well, but I would expect the vast majority of those 5 million to come from people who aren't receiving any financial assistance at all (or nominal help at most).

The other half of the savings, again, comes from the assumption that a good 5 million or so Medicaid enrollees would drop their coverage due to the paperwork/hassle factor.

Anyway, that's the official word from the CBO.