Two weeks ago, on August 14th, I officially concluded my requested 2017 rate hike project. I've since gone back and made some adjustments to various states where carriers have either pulled out of the individual market or resubmitted revised rate hike requests, but I had enough preliminary data from all 50 states (+DC) to come to some initial conclusions.

I sorted out the states by three different criteria, looking for any noteworthy patterns: Federal vs. State-Based Exchanges; Transitional Policies allowed vs. NO Transitional Policies; and whether or not the state has expanded Medicaid under the ACA (whether "standard" Medicaid or via a custom waiver version, like Arkansas, Indiana and New Hampshire did).

My conclusion at the time was that there wasn't enough of a distinction in either of the first two criteria to draw any conclusions...but as for Medicaid expansion, I said:

Here, I'm seeing a pretty clear pattern: States which haven't expanded Medicaid under the ACA (whether "normal" expansion or via a waiver modification) have median rate increase requests nearly 10 percentage points higher than those which have expanded the program.

As noted, since then I've updated a few of the numbers for some states. Here's what the chart looks like with the updated data: 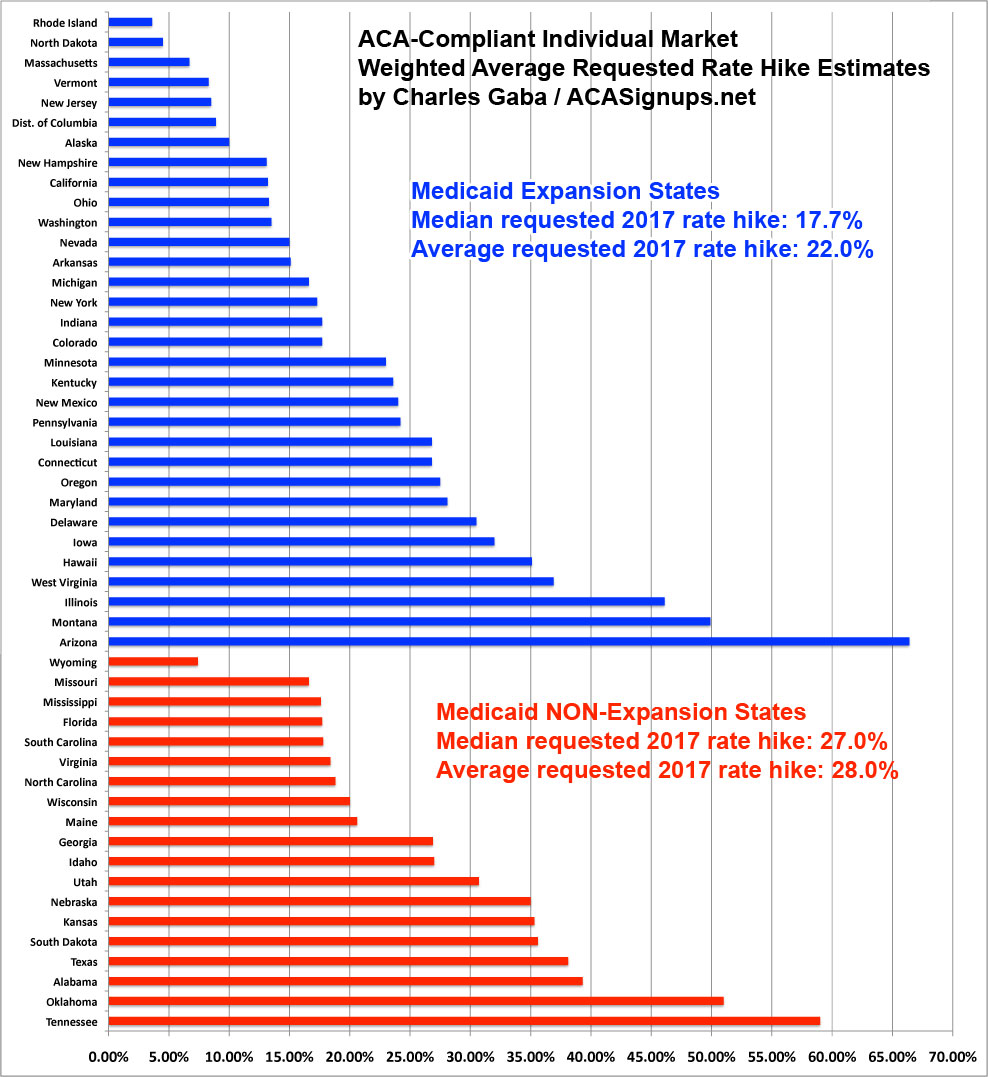 Well, as it happens, just a couple of days ago, the HHS Dept. released their own report analyzing the impact of ACA Medicaid expansion on 2015 premium increases...and came to the exact same conclusion:

A new study published by in-house researchers at the Department of Health and Human Services compared places that have expanded their Medicaid programs as part of Obamacare with neighboring places that have not. They found that, in 2015, insurance in the marketplace for middle-income people cost less in the places that had expanded Medicaid.

By comparing counties across state borders, and adjusting for several differences between them, the researchers calculated that expanding Medicaid meant marketplace premiums that were 7 percent lower.

Note that there are a lot of differences between the HHS report and my chart--they based theirs on the 38 HC.gov states only, but had access to the fully-detailed, real-world data for 2015. My analysis is based on all 50 states...but includes a lot of large assumptions for many of the states (not to mention the fact that these are all requested rate increases only...some of them could easily decrease or increase by the time 2017 Open Enrollment actually starts).

Still, it seems pretty clear that there's ample evidence now that expanding Medicaid helps improve the individual market risk pool--presumably because lower-income people tend to be less healthy to begin with, with some caveats:

A substantial body of research has shown that lower-income Americans tend to have poorer health than those who earn more. (Cause and effect isn’t clear: People may be unable to earn a higher income because of health problems.) And that difference may explain why Medicaid expansion may have lowered insurance premiums. Because the states that didn’t expand had more sick people in their middle-class insurance pool, prices went up for everyone, the paper argues.

Anyway, nice to be proven correct.

UPDATE: It turns out Louise Norris wrote up a couple of posts about this last year which came to similar conclusions:

This makes sense when we consider the financial toll on hospitals in states that have not expanded Medicaid; their costs that must be paid by privately insured patients are higher than they would be if the state were using federal funds to expand Medicaid and reduce the amount of uncompensated care that the hospitals provide.

It's also worth reiterating that 3 of the lowest average rate increase requests come from Massachusetts, Vermont and DC, each of which merge their individual and small group market risk pools. Alaska, meanwhile, took steps at the state level to set up their own reinsurance program to stave off heavy rate hikes (admittedly, Alaska's rates were already sky-high to begin with).