For awhile now I've been noting that making predictions about how many people will actually enroll in ACA exchange plans for 2018 is extremely difficult to do for a variety of reasons. On the one hand, Donald Trump has been desperately trying to sabotage the law any way he can, including everything from slashing outreach funding by 90% and cutting the enrollment period in half to cutting off Cost Sharing Reduction reimbursement payments...while at the same time Congressional Republicans have been desperately trying to repeal the law outright. All of this has caused a tremendous amount of confusion, as well as causing average unsubsidized premiums to shoot up around 30% on average nationally.

On the other hand, this has also led to a massive grassroots activist movement by groups like Get America Covered, the 2018 ACA Signups Project and (ahem) myself to get the word out anyway.

Until a few minutes ago, I only had three data points: Day One enrollment figures from Maryland, Washington State and California, and while all three were extremely promising starts (MD up 70%, CA up 25% and WA "robust" in general), it's still way too little info to draw any conclusions.

And then this story broke from Peter Sullivan of The Hill:

A record number of people signed up for ObamaCare in the first few days of open enrollment this year compared to the same period in previous years, several sources close to the process told The Hill.

...On the first day of enrollment alone, Nov. 1, one source close to the process told The Hill that more than 200,000 people selected a plan for 2018, compared with about 100,000 last year. More than 1 million people visited healthcare.gov that day, compared to about 750,000 last year, the source said.

It is still early in the process and it is unclear how the final sign-up numbers will come out. Sign-ups early in the enrollment season are often people renewing their coverage, not new enrollees.

Now, it's way too soon to get too geeked about this; this could simply be a sign of people who would otherwise have signed up later on doing so earlier due to the shorter period and/or worries about the other insanity swirling around the process. If so, then the final numbers could still end up stinking (or mediocre at best). After all, enrollments were running neck & neck with (or even slightly ahead of) 2016 last year right up until the final week when the numbers dropped off a cliff, ending up half a million shy.

Also, the article doesn't clarify whether the 200,000 figure refers to the national total or HealthCare.Gov only. If it's national, then HC.gov's portion of that is likely closer to 150K, which is exactly what I was originally expecting for launch day nationally (I was worried earlier today when it looked like it was only 62,000). Remember, with the enrollment period only lasting half as long, it's natural to expect some amount of increased pace, although I wouldn't expect it to be strictly linear (ie, 1/2 as long = 2x as many enrolling daily).

HOWEVER, if 200,000 refers to HealthCare.Gov only, that's even better, because it means the national total is even higher...potentially as many as 220,000 or so.

The wording of the article actually makes it sound like 200K refers to HC.gov only; I'm waiting to confirm this. In the meantime, here's what The Graph looks like assuming it's for HC.gov only: Around 210,000 confirmed Day One QHP selections nationally: 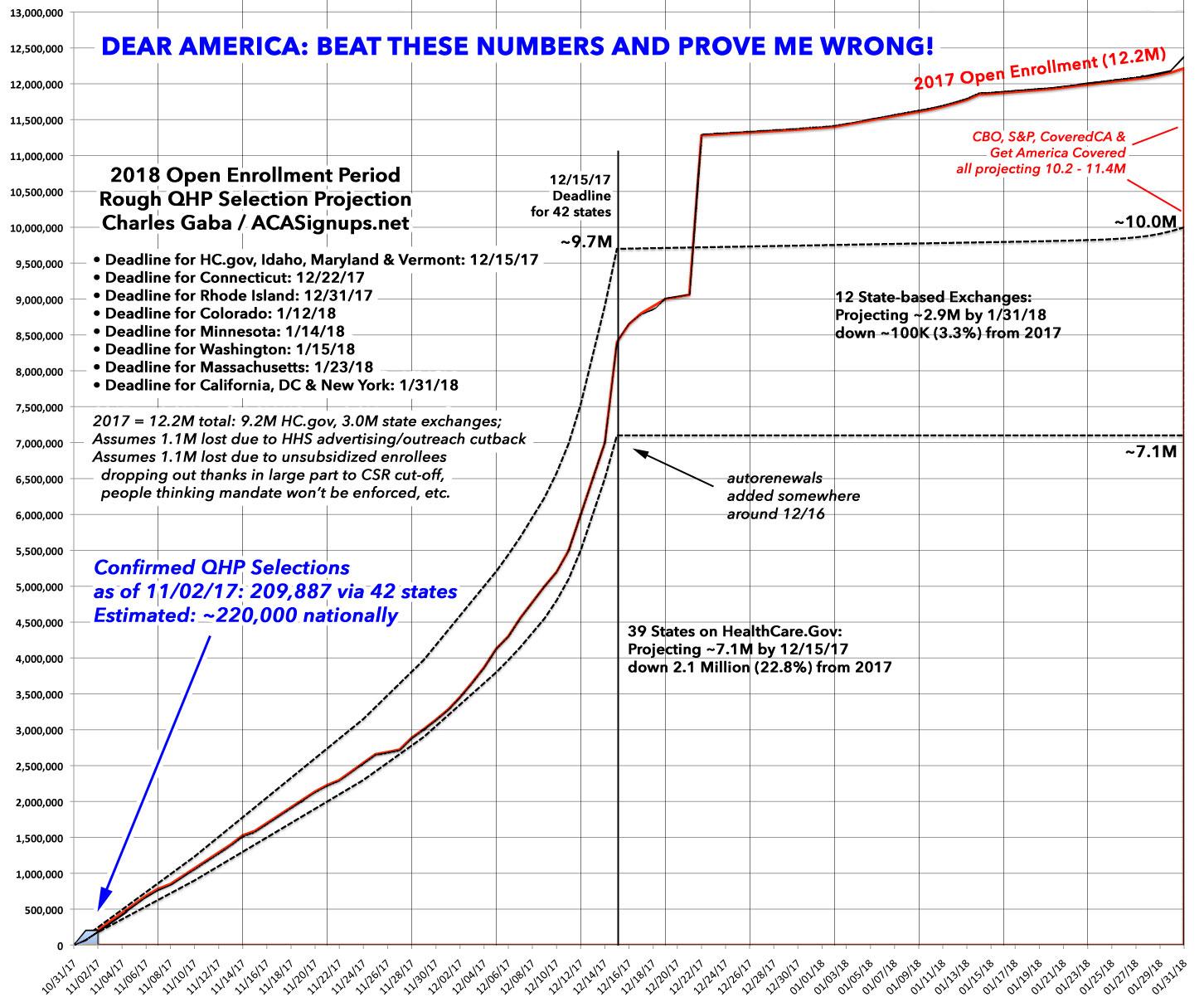