Let's suppose that you and your spouse were 39 years old last fall, and you have two young children. None of you smoke, and you live in Oakland County, Michigan. Let us further suppose that you decided to enroll your family in a standard Silver policy via the federal ACA exchange, HealthCare.Gov. Blue Cross Blue Shield of Michigan is the biggest carrier in the state, and Blue Care Network is their HMO division, so you decide to go with them.

How much of a tax credit will they receive, and how much would they end up paying for 2017 at different income levels after applying tax credits?

In 2017, the Federal Poverty Line in the 48 contiguous states for a family of four $24,300. Let's plug in some different incomes and see where they fall on the FPL scale:

As you can see, for 2017, at the first three income levels, both children qualify for CHIP because Michigan's cut-off for the CHIP program is 212% FPL. The policy in question only applies to the two parents, who receive a substantial tax credit at these lower income levels. Furthermore, the family also qualifies for CSR assistance atall three levels (141%, 152% and 202% FPL), lopping their deductible down significantly at 141% and 152%, and to a smaller degree at 202% FPL. After that, it shifts to tax credits only (for all 4 family members), so they pay anywhere from $610 - $887/month depending on their income level.

Notice how the tax credits drop off to almost nothing at 354% FPL before disappearing entirely at 405%, since 400% FPL is the maximum income threshold for any tax credits.

Now, let's suppose this same family's income stays precisely the same in 2018, with no other changes (ie, they don't move, don't have another kid, etc). The only change to their situation is that they're each one year older (which does bump up unsubsidized premiums by a couple percent, by the way). How much can they expect to pay for the same (or virtuallly the same) policy?

You see, the Federal Poverty Line also increases slightly each year...which means that multiples of the FPL nudge up a few hundred bucks per year as well. For most people this probably won't make much of a difference...but in some cases it makes a huge difference. How big?

I deliberately chose income levels which are precisely at the exact cut-off points for different types of financial assistance at the 2018 FPL levels: 150%, 200% and 250% for the different CSR thresholds and 400% FPL for the Advance Premium Tax Credit (APTC) cut-off. Take a look what happens at the exact same income levels as 2017:

Here's where things get really interesting, however: What happens at exactly $98,400?

Disaster. They no longer qualify for any financial assistance...meaning their APTC dropped from $277/month to nothing at all. That's a net loss of $3,324 for the year...because their income rose by $1 even.

This is what's known as The Subsidy Cliff. It's a real problem with a simple solution: Raise (or remove) that subsidy cap.

Unfortunately, that's unlikely to happen anytime soon, which means that the only option for people hovering around the 400% FPL threshold is to do whatever they can legally do to keep their income below it.

More to the point: Just because you didn't qualify for tax credits this year does NOT mean you won't quaify in 2018. In fact, I'm guessing there's several hundred thousand people who will be pleasantly surprised...as long as they actually visit HealthCare.Gov (or their state-based exchange) and plug in their info to find out. 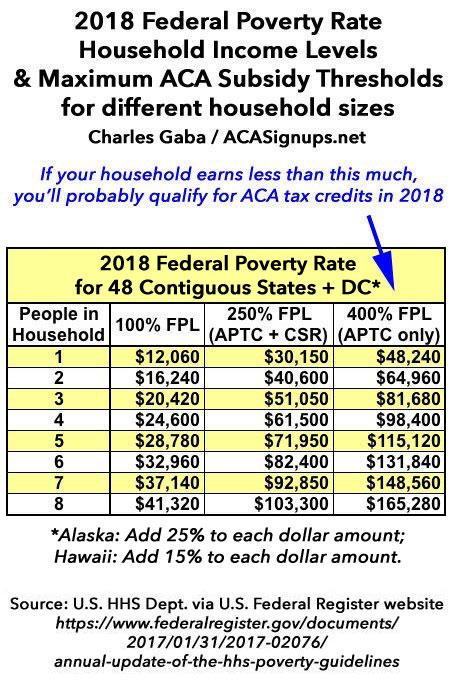