There's been some pushback about this latter sabotage effect, for two reasons: First, because unlike the CSR issue (which well over half of the insurance carriers have mentioned explicitly in their rate filings, usually including specific percentages), the "mandate enforcement uncertainty" is more vague. Fewer carriers have mentioned it at all, and many of those which have don't put a hard number on it; it's more of a general bullet point listed along several other factors. However, I'm still fairly confident about the 3-4% estimate.

The second reason for the pushback is that while the IRS stated back in February that they wouldn't be enforcing the individual mandate after Trump's Day 1 Executive Order essentially telling them not to do so, they did a complete 180 on this a week or so ago, saying that they will be strictly enforcing the mandate after all. In other words, the criticism goes, the mandate enforcement issue won't be a factor after all!

There are two problems with this. First of all, millions of Americans have been hearing for 10 months now that the mandate won't be enforced, directly from the President of the United States. I guarantee you that 10x more people heard that message than the number who heard the IRS's contradiction of that last week. It doesn't even matter whether they do enforce the mandate; what matters is whether people think they're going to...because the enforcement (or lack thereof) for 2018 won't actually happen (or not) until April 2019, long after any risk pool damage has been done.

The other problem is more immediate: Just as the 2018 rates are pretty much baked in even if the carriers do end up getting their CSR reimbursements, by the same token, it's too late for the carriers to go back and knock off 3-4 points now that the IRS has chimed in. The premiums for 2018 are pretty much locked in stone for better or worse at this point.

In any event, here's my final national estimates. I may tweak a couple of the individual state numbers (Texas in particular is a bit questionable), but otherwise, here's what we're looking at: 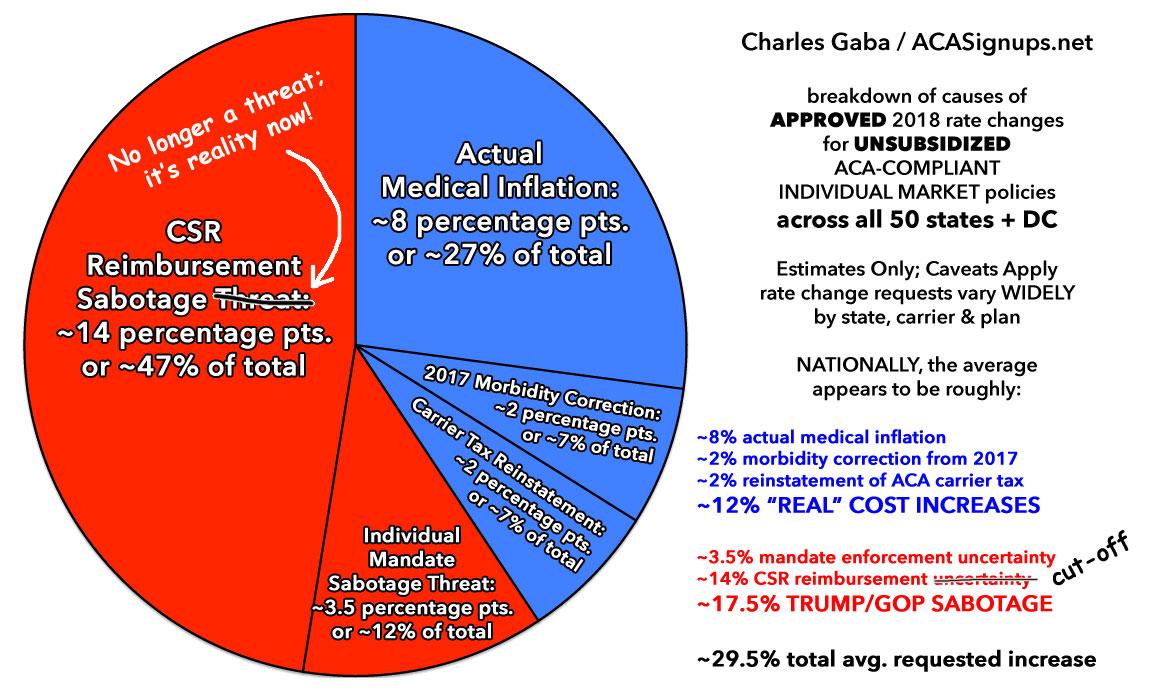