Trumps HHS Dept. openly admits more enrollees than ever can get low-cost insurance for 2018, and other head-scratchers

Considering how absolutely obsessed the Trump Administration is about repealing the ACA, this new official report from Trump's Assistant Secretary for Planning and Evaluation (ASPE) seems like a strange way of showing it.

The very first bullet starts off ripping on the 37% average rate hike on benchmark Silver plans...

Premium Growth: For the first time, annual growth in the average monthly premium available to a 27- year-old for the SLCSP, at 37%, outpaced that of the lowest-cost plan (LCP), at 17%.

Of course, there's pretty obvious reason for that: Trump's cut-off of Cost Sharing Reduction (CSR) reimbursement payments. The ASPE report does go into this, but not until Page 6. Meanwhile, it's immediately undermined anyway (at least regarding subsidized enrollees) in the very next bullet:

For enrollees who are eligible to receive advance premium tax credits (APTCs), the larger increase for the benchmark plan premium may result in these enrollees paying a lower portion of their premiums compared to prior plan years; especially if they select plans from metal levels other than silver.

This is exactly what folks like Dave Anderson, Andrew Sprung, Louise Norris and myself have been yammering on about for a couple of months now: Silver Loading and The Silver Switcharoo

Lowest-Cost Plan Available: The percentage of current enrollees with access to a plan for $200 or less decreased from 16% for PY17 to 6% to PY18. If enrollees were to stay within their current metal level, only 2% will have access to coverage with premiums of $200 or less for PY18.

Of course, this is referring to the full-priced plans, not the price after subsidies are applied.

Issuer Participation: Issuer participation in the Exchange continues to decline with 132 total state issuers in PY18, down from 167 in PY17. Eight states in PY18 will have only one issuer: Alaska, Delaware, Iowa, Mississippi, Nebraska, Oklahoma, South Carolina, and Wyoming.

Well, yeah, again: Many of the carriers which are pulling out of the exchange altogether in 2018 have specifically cited Trump's threats (now a reality) to cut off CSR reimbursements, along with the will-they-or-won't-they game the administration has been playing regarding enforcement of the individual mandate, as the primary reasons they're doing so.

As noted above, on Page 6 the report comes right out and says what I and others have been predicting for awhile now:

Boom. There you have it, official confirmation...again, from Trump's own HHS Department.

Tables 3 and 4 show the average unsubsidized rate increase for the Benchmark Silver and entry-level Bronze plans across the 39 HC.gov states. Again, the unsubsidized premiums for benchmark plans are going up 37%, but the subsidies are going up around 45% on average, which means a whole bunch of subsidized enrollees are going to see their what they actually pay in premiums go down next year as a result, especially if they shift off of Silver onto either Bronze or Gold plans:

This is shown on Page 10...the 27-year old example goes from paying $142/month to $138/month while the famly of four goes from $407/mo to $397 for what's presumably a near-identical plan otherwise. Not a huge savings, of course, but given all the freaking out about the massive increase in unsubsidized premiums, this is welcome news for lower-income enrollees:

Next we come to the headline above: Donald Trump's HHS Department is officially informing the country that 80% of HealthCare.Gov exchange enrollees will be able to get an ACA policy for less than $75/month next year, and is even comparing it to prior years to show how this percentage is higher than ever. In addition, another 6% can get a Bronze plan for less than $150/month.

Finally, the ASPE report includes a bunch of tables which break the above into state-level numbers. Note that they actually list 40 states instead of 39, because Idaho was hosted at HealthCare.Gov the first year (to date, it's the only state which has left the federal exchange, although four other states (Hawaii, Kentucky, Nevada and Oregon) have moved onto HC.gov since then).

The ASPE version of these tables is a bit unwieldy so I've converted them to an easier-to-read format. Here's the average unsubsidized Benchmark Silver prmeiums for a 27-year old from each year... 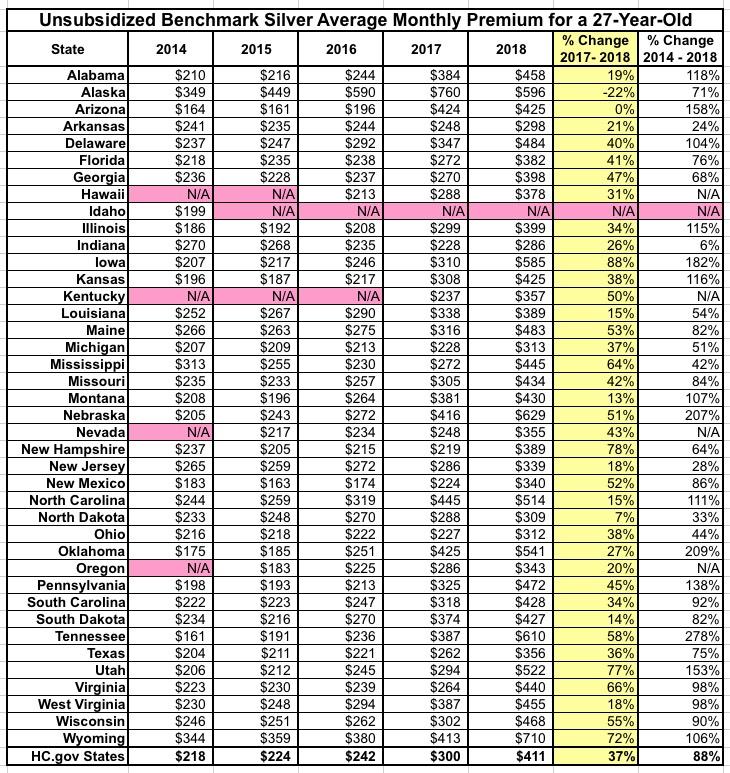 ...and here's the average unsubsidized entry-level Bronze plan for a 27-year old for each year: 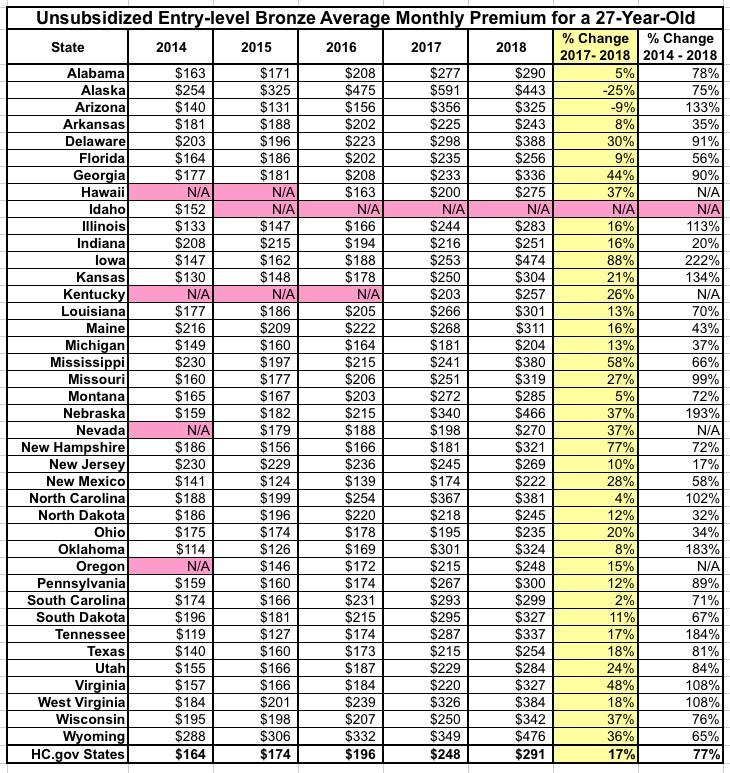 Note that neither of these can really be compared to my own 29.5% average unsubsidized rate hike analysis for several reasons: I include all 50 states + DC, while they only include 40 states; I include off-exchange ACA-compliant plans, while they include only exchange-based policies; and I include all plans at all metal levels, while they only include a single bronze and single silver plan for each state. Even so, their averages are pretty close to mine: Around 71% of exchange enrollees generally choose Silver, with another 23% or so choosing Bronze plans. 71% of 37% = 26.3%, and 23% of 17% = 3.9%...add them together and you get...30.2%.

Finally, they include a state-level breakout of what percent of enrollees will be eligible for a low-premium Bronze policy in 2018: 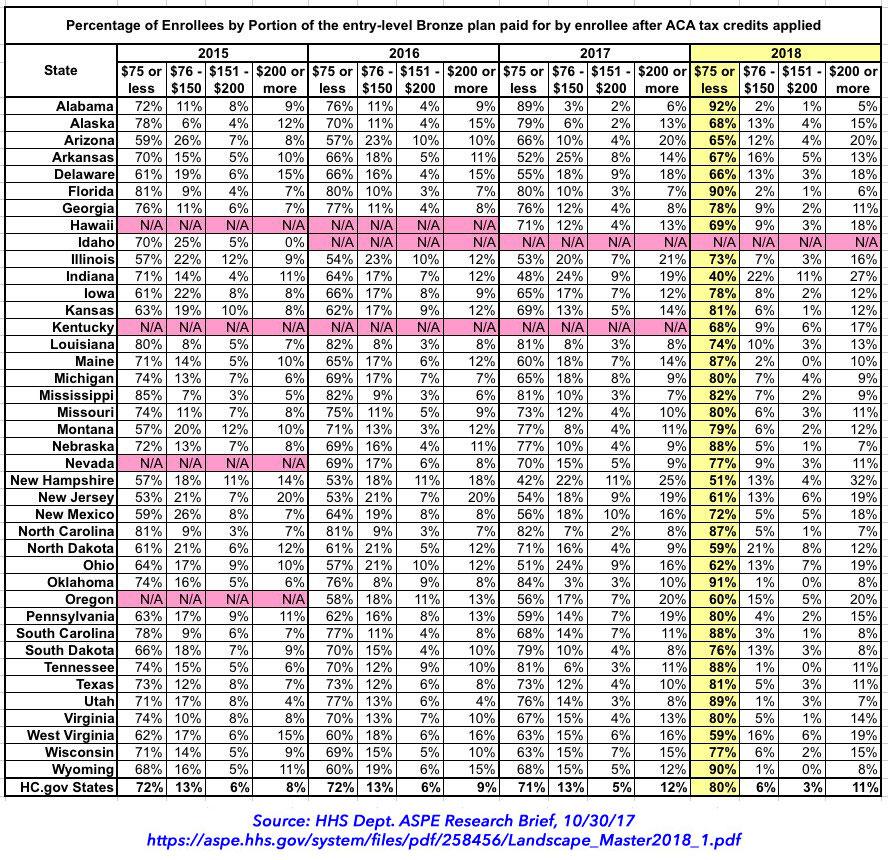 UPDATE: Here's another eye-opener: According to a Kaiser Family Foundation analysis of HHS data, a single 40-year old earning $25,000 can get a Bronze plan for free in over half the counties in the country:

Remember that this analysis only includes the 39 states run through HealthCare.Gov. There's 3,142 counties (or county-equivalents) in the U.S.; these 39 states hold 2,722 of them, so that's 56%. Assuming a similar ratio of the remaining 11 states (+DC), that should be roughly 236 more counties where this is the case, or 1,776 total.

Of course, the lowest-end Bronze plan is likely to have a high deductible, but if you're not paying a dime in premiums, so what? It's still a hell of a lot better than nothing, since you still get all the free preventative services (checkups, mammograms, blood screenings, etc) and the protection of the Maximum Out of Pocket Cost (MOOP), which I believe is $7,350 in 2018, so if you're debating between a free Bronze plan and no coverage at all, why the heck would you choose nothing (and remember, you'd likely still be facing the $695 mandate penalty if you didn't go for it).