Last week I gave a very rough, back-of-the-envelope projection of perhaps 9.5 - 10.0 million Qualified Health Plan (QHP) selections during the 2018 Open Enrollment Period, which starts tomorrow. As I repeatedly emphasized, this wasn't based on any deep-in-the-weeds statistical analysis, because the one-two punch of the GOP's farcical "repeal/replace" efforts combined with the Trump Administration's "let Obamacare explode!" sabotage efforts have managed to botch things up so badly that I didn't see much point in expending the effort this year. Besides, others, such as Obama Administration Chief Marketing Officer Joshua Peck have already done part of this work for me:

When it comes to estimating the impact of outreach, I am not pulling a number out of the air. The administration falsely asserted that “they had not done any studies of the efficacy of enrollment advertising”. This is absurd. The Department of Health and Human Services closely measured the impact of outreach during previous Open Enrollments so we have a clear understanding of how effective advertising is at driving enrollment. Internal HHS reports, written about by the Huffington Post, documented a two-year study of the causal relationship between outreach and enrollment.

Last year around 12.2 million people selected QHPs between 11/01/16 - 1/31/17...and this was already down by nearly 500K over 2016 due in large part to the incoming Trump Administration pulling the plug on advertising/outreach efforts in the critical final week of the 2017 period.

Mr. Peck concludes that he expects overall enrollments to drop by about 1.1 million people based purely on the sabotaged advertising budget alone, separate from everything else (the reduced navigator budget, the half-length enrollment period, CSR premium spikes, etc.)...and who am I to disagree on this front?

Beyond that, I personally expect an additional drop of about another 1.1 million or so due to the additional sabotage factors, bringing the grand total in at around 10 million even (I'm slightly more optimistic than I was a week ago, so I'm dropping the low-end 9.5M number to simplify things a bit). I figure the vast bulk of the net losses (around 2.1 million) will be on the 39 HealthCare.Gov states, since that's where the ad budget is being slashed; I'm assuming the 12 state-based exchanges will see a more modest loss of perhaps 100,000 collectively, giving perhaps 7.1 million & 2.9 million respectively. This would mean HC.gov enrolls 71% of the total, down from the 76% they usually rack up.

The Center for American Progress has written up their own analysis (which includes my own projection among others):

Unfortunately, the Trump administration’s refusal to implement the current law in good faith threatens to undermine this year’s open enrollment. Other analyses have concluded that individual elements of President Trump’s ACA sabotage campaign will have negative effects on the order of 1 million fewer enrollments. The Congressional Budget Office projected that halting cost-sharing reduction funding would result in 1 million fewer people in the marketplaces relative to baseline and, in a separate analysis, that repeal of the mandate would lower nongroup coverage by 1 million people. Separate analyses by Covered California and Get America Covered estimated that this year’s lack of advertising alone could result in 1 million or 2 million fewer enrollments in the marketplaces. Authoritative blogger Charles Gaba, who has tracked marketplace enrollment for the past four years, expects the final tally for 2018 plan selections to be a mere 9.5 million to 10 million.

Meanwhile, S&P Global just came out with their own projection of 10.6 - 11.4 million people signing up (call it 11.0 million even), somewhat more optimistic than mine.

As I do every year, I've whipped up The Graph with a general idea of what I expect the pattern to look like. Needless to say, this year is gonna be a lot more unpredictable, and it's gonna look quite different visually than it has the past 3 years due to the enrollment period only lasting 6 weeks (remember, it was 6 1/2 months back in 2013-2014).

Needless to say, I'm hoping very much that I'm proven dead wrong about my pessimistic view and that the actual numbers wind up much closer to the past couple of years. 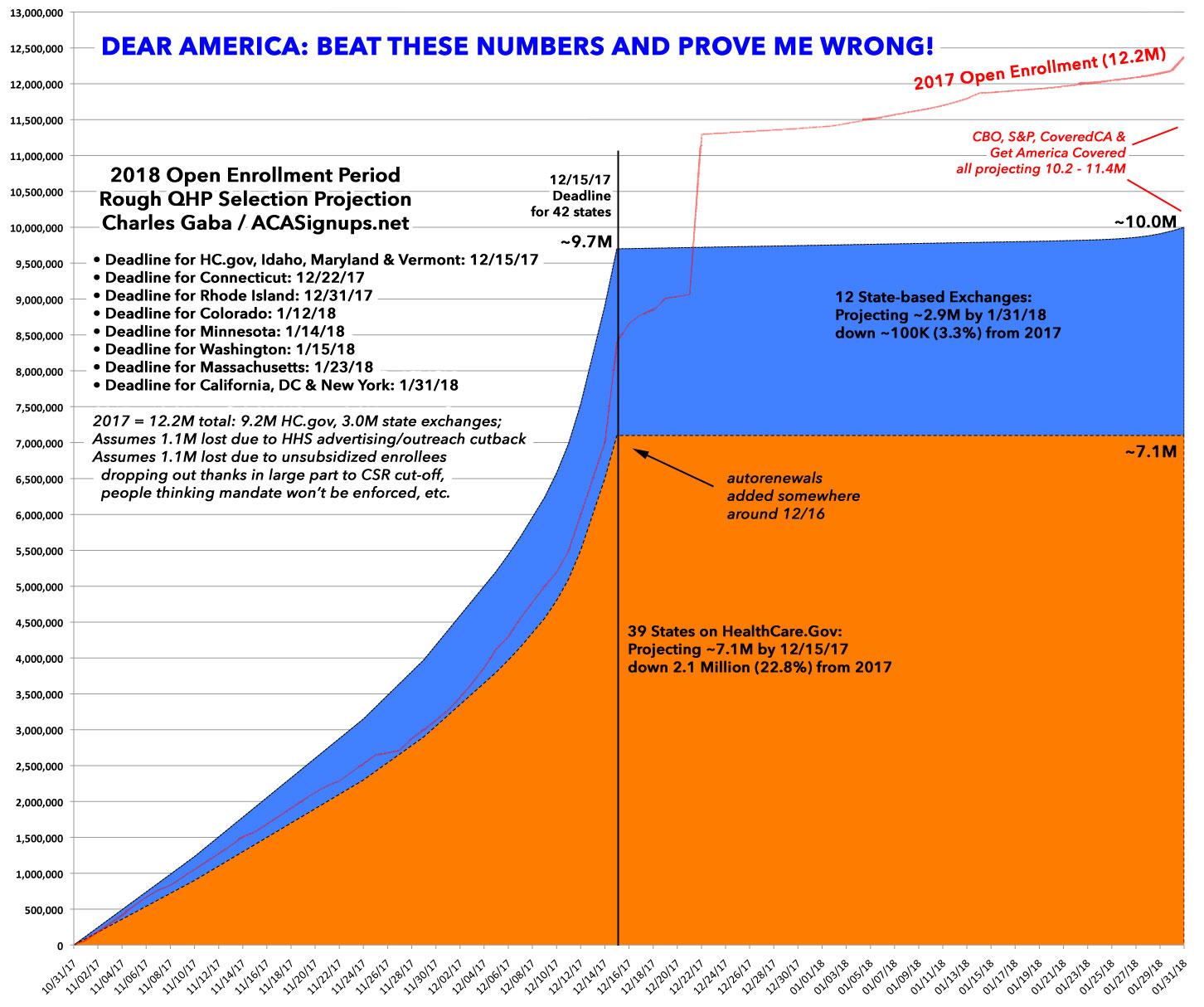