Several of the states operating their own ACA exchanges have already had their 2018 Window Shopping tools up and running for several weeks now, including Covered California, Your Health Idaho and the Maryland Health Connection, so this really shouldn't be that big of a deal, but given the insanity and uncertainty surrounding this years' Open Enrollment Period and especially the fact that HealthCare.Gov is responsible for 39 states (while being operated by the federal government under the thumb of an openly-hostile Trump Administration), it's pretty important news regardless.

Regarding the CSR Load issue: Michigan, along with 17 other states, is going the "Silver Load" route. This should mean that subsidized enrollees should see their tax credits increase by somewhat more than the benchmark plan does (which is good)...but it should also mean that unsubsidized enrollees will be hit with an additional price hike for Silver plans (though Gold and Bronze should only go up the "normal" amount). Let's take a look, shall we?

Here's a 3-person household in Oakland County, Michigan; two adults (48 & 47) with one child age 11. None smoke. Let's plug them in a three different income levels to see what happens:

For 2017, this family qualified for $578/month in tax credits as well as CSR assistance. 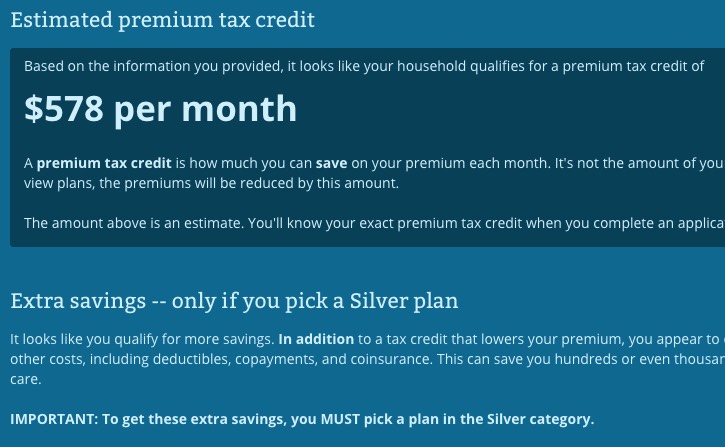 Note, however, that their child would be automatically eligible for the CHIP program (assuming, of course, that Congress actually renews the funding of the program which lapsed nearly a month ago). The private policy for this family would only apply to the two adults:

The Benchmark Silver plan is costing them nothing, because the full-price premium is $559/month, and their deductible is only $900 thanks to CSR assistance. If they were foolish enough to insist on a Gold plan at this income, however, they'd be looking at something like $418/month (although the deductible would be a much lower $500): 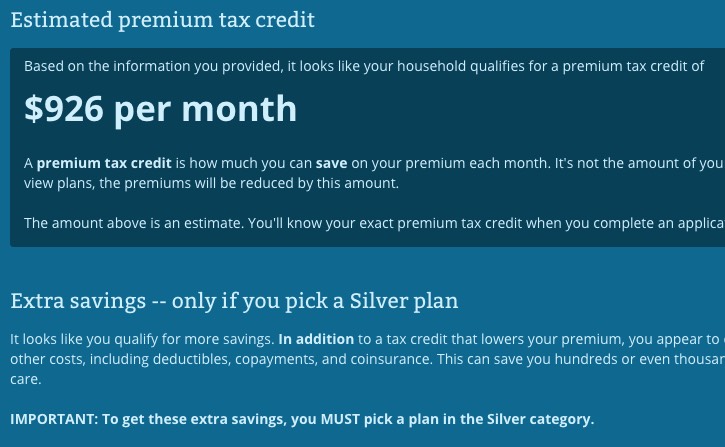 This is a good thing...because that same Benchmark Silver plan has also increased in price...by $343 per month. Thanks to the increased tax credit, they can still pay $0 for the same Silver plan...and their deductible has decreased by $400 as well. Why? I'm guessing it's because the federal poverty level thresholds are also increasing a bit this year.

How about that Gold HMO plan? Well, at this income level it would still be pretty foolish, but let's take a look anyway:

Hmmm...the BCN "Select Gold" HMO is no longer available, having been replaced by the BCN "Preferred Gold" HMO. It looks pretty much the same, except that the deductible is $500 higher and the out of pocket maximum is $800 higher...but the premiums have dropped by $129/month after the tax credit is applied! That's $1,548 less than this year, partly cancelled out by the $500 higher decuctible.

The Silver plan is still the obvious choice at 150% FPL, however.

For 2017, this family qualified for $190/month in tax credits, but earns too much to receive CSR assistance. If they chose the benchmark Silver plan, they're paying $485/month after the tax credits are applied, with a $10,800 deductible.

If they chose the Gold BCN HMO, they're paying $1,013/month with the $500 deductible after the tax credits are applied.

For 2018, assuming the exact same household income and that the only change to the family status was everyone being one year older, the tax credits have increased by $351/month to $541/month total.

Here's what that does for this family next year. The "Meridian Choice" plan is no longer the benchmark Silver; the price for that plan has increased by $91/month...but the new Benchmark Silver, BCN's "Blue Cross Detroit Silver Saver", only costs $488/month...just a couple dollars more than the Meridian does this year. In addition, the deductible on the new benchmark plan is $4,300 lower than the Meridian plan is this year. this family would probably be better off switching to it, assuming their doctors/hospitals are still in network:

How about the BCN Gold HMO, however? Again, the slightly different plan has a $500 higher decuctible...but the premiums have gone down by $47/month, or $564/year. This is basically a wash year over year. 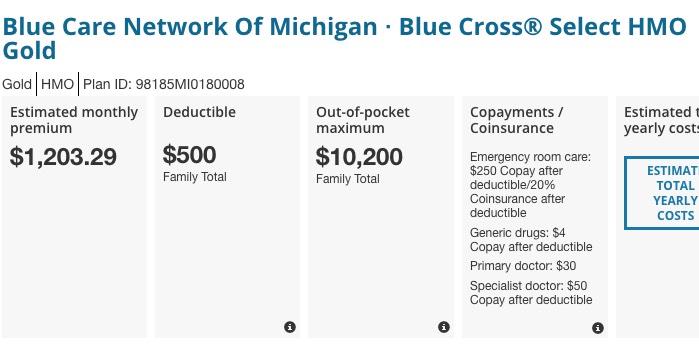 What about Gold? Oof...a 25% increase. Not nearly as bad as the Silver spike, but bad nonetheless.

The bottom line: As I keep noting, as long as you qualify for tax credits, you'll probably spend no more in 2018 than 2017 in most cases...and many people will save money year over year.

If you're unsubsidized, however, and you don't live in one of the 20 or so "Silver Switcharoo" states, you're probably looking at a fairly substantial rate increase.

Here's a summary of all three of the income level scenarios above:

The 450% FPL problem should be mostly mitigated in Silver Switcharoo states...unfortunately, Michigan doesn't appear to be one of them (I'll double-check on this, however). 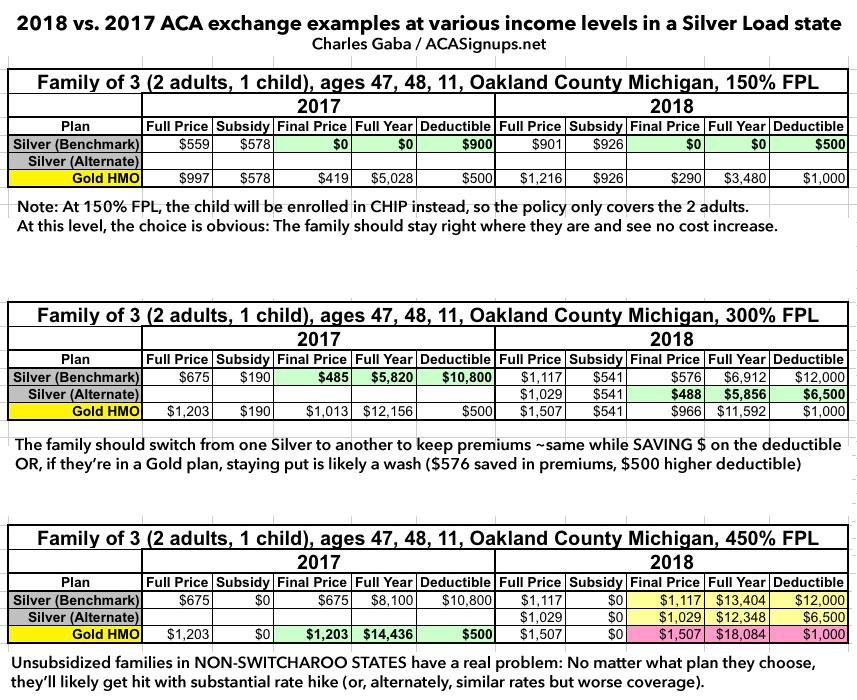