UPDATE: My initial thoughts on the Murray/Alexander CSR deal...

OK, I was in on the Breaking News a few hours ago; unfortunately a) I had to pick my kid up from school and b) our power went out. (I'm currently online via our generator). As a result, I haven't actually posted anything here at the site about the just-announced Alexander-Murray deal until now.

Axios has the basics:

Sen. Lamar Alexander says he and Sen. Patty Murray have reached a deal to fund the Affordable Care Act's cost-sharing subsidies in exchange for giving states more regulatory flexibility with the law. Shortly after Alexander announced the deal to reporters, President Trump called it a "good short term solution."

OK, right off the bat: I guarantee you that Donald Trump (who just yesterday ranted about how "Obamacare is 'dead' and 'gone') doesn't have the slightest friggin' clue whether this (or any other deal) is "good" or "bad". He hasn't read it and he wouldn't understand any of it if he tried to anyway.

Onto the deal itself:

What we're watching: Whether this deal can gather enough support to pass — and if so, how quickly.

What's in the deal:

This is, of course, the most obvious takeaway...but the big question there is whether there's enough time to pass this through both the House and Senate, get it signed by Trump (assuming he doesn't veto, or it gets a 2/3 majority in both houses), and actually implement it in time for the rapidly-approaching 2018 Open Enrollment Period (which starts in less than 15 days, according to the countdown clock at the top of this website).

Assuming they're able to do all of that (and HC.gov, along with the state-based exchanges, are all able to switch their 2018 pricing back to "funded CSR" levels in time), that will lead to another problem: All the "outreach funding" in the world won't prevent a ton of people from being confused as hell about what's going on. The ACA exchanges, open enrollment period, 2018 premiums and so on have been jerked around so much this year that it's no wonder that, according to a new Hart Research Associates survey released this morning by Get America Covered:

Also worth noting: customer satisfaction with plans through HealthCare.gov are high: 85% are satisfied overall (according to Gallup in 2016, satisfaction for employer sponsored plans was 66 percent.)

The second problem: people don't know about tax credits and that 8 in 10 qualify for financial help so they think health care is out of reach. 35% of the insured and 59% of uninsured don't think there will be affordable plans for 2018. Combine that with the finding that only 51% of the insured and just 15% of the uninsured are aware they qualify for tax credits or that 84% of the uninsured would consider a plan for $100 or less per month affordable.

The third problem: We've been talking about repeal since the beginning of the year and people are confused and think Obamacare will be cancelled in 2018 or are unsure. Majorities of insured (54%) and uninsured consumers (59%) either believe that Obamacare will be cancelled and people will lose their health insurance coverage in 2018 or say that they are unsure. Remember, this poll was before the latest administration actions, which likely caused even more confusion.

On the other hand, assuming there isn't enough time to re-set the premiums back to "CSRs funded" levels for 2018, that means that prices will spike for next year...and then presumably would drop by about 15-20% starting in 2019, just in time for the midterms. If that happens, I guarantee that the GOP will run around trying to claim that they "fixed" Obamacare and "saved" the American public from spiraling premiums, bla bla bla. Of course they'll try to do that whether it kicks in for 2018 or 2019, but if prices go up this year and drop next, it'll make for much more dramatic campaign ads.

Trump, of course, will claim to have "saved" (or even "repealed") Obamacare no matter when anything kicks into effect. If the deal falls through, of course, he'll once again blame everyone but himself as he always does.

The "Copper Plan" idea is something which has been bopped around for quite awhile now. Hell, even I noted that adding "Copper Plans" to the metal levels available might be worth considering way back in 2014. I presume the idea would be that they're similar to Bronze plans but with lower premiums, but an even lower actuarial value (50%?) and even higher deductibles ($10,000+ per person?). These are basically the same as the "Catastrophic" plans currently available to enrollees under 30 years old. Here's how ACA Catastrophic plans work today:

Catastrophic health plans: For people under 30 or with certain exemptions

Catastrophic health insurance plans have low monthly premiums and very high deductibles. They may be an affordable way to protect yourself from worst-case scenarios, like getting seriously sick or injured. But you pay most routine medical expenses yourself.

...Only the following people are eligible:

Currently, as Washington State actuary Rebecca Stob explained to me, one of the reasons why Catastrophic plans are so dirt cheap is because they're on their own, separate risk pool (at least for purposes of Risk Adjustment...I'm a little fuzzy on the distinction between that and Price Indexing). If this remained the case under Alexander-Murray, it could be disastrous for the ACA exchange risk pool, because a big chunk of young/healthy types currently on Bronze plans would move over to the new Copper plans, making the ACA exchange risk pool (already not doing very well) even older and sicker.

HOWEVER, I've been reassured by multiple people in the know including Topher Spiro and Andy Slavitt that under Alexander-Murray...

5: Importantly, these plans will remain in the single risk pool. They will not splinter the risk pool, driving up costs for sick people.

9/ I've already heard ppl on TV saying it incorrectly-- that it splits the risk pool. It does not.

This is vitally important, because it means that one of two things happens: Either a lot of people go for Copper...or hardly anyone does.

Ummmmm...OK, this is a good thing, of course, but it's simply restoring the same money that Trump slashed to the bone last month anyway, so I'm not exactly going to get all excited about it. If someone steals your TV and then agrees to return it as part of a later "negotiation", it's not exactly a "win". In addition, much of the damage for 2018 has already been done; promotional campaigns/materials, TV ads to be produced, navigator staffers to be hired and trained, etc etc can't be done at the drop of a hat, and time is extremely short.

(shrug) Fine with me. If the waiver request makes sense, it should be approved quickly. If it's a lousy waiver, it should be rejected quickly. I don't really trust Trump's HHS Dept. to be likely to do the right thing with these whether they do so quickly or slowly, so this is no biggie from my POV. HOWEVER...

THAT one gives me a lot of pause...except for these reassurances by, again, Andy Slavitt:

If Andy says so, I believe him. That leaves:

Huh. Authorization...but not appropriation. Reinsurance along the lines of the program launched in Alaska (and half like the one launched in Minnesota) is a critically important step towards stabilizing the markets...but again, the devil is in the details. If blue states or the Dems in Congress are gonna have to give up a pound of flesh every time reinsurance program funding is set to be appropriated, this could get tiresome and ugly really fast, but for the moment, it's better than nothing I suppose.

There's still a lot more details coming out (and in fact a lot more info has been released just in the time it took me to type this), so I am not giving this my full approval just yet (and the deal could change for the worse before being voted on)...but it sounds pretty promising overall.

My initial takeaway is that the GOP leadership is on board with this deal not so much because they like it--in fact they probably think it's tilted towards the Dems--but because they're scared to hell about losing the House and possibly the Senate during next year's midterm elections, and feel that doing this will save their asses. They might be correct about that, although they still deserve to lose both based purely on their actions up until now.

Much more on this soon; stay tuned!

UPDATE: This is kind of what I was talking about: Check out the memo circulating among Republican members of Congress promoting the Alexander-Murray deal: 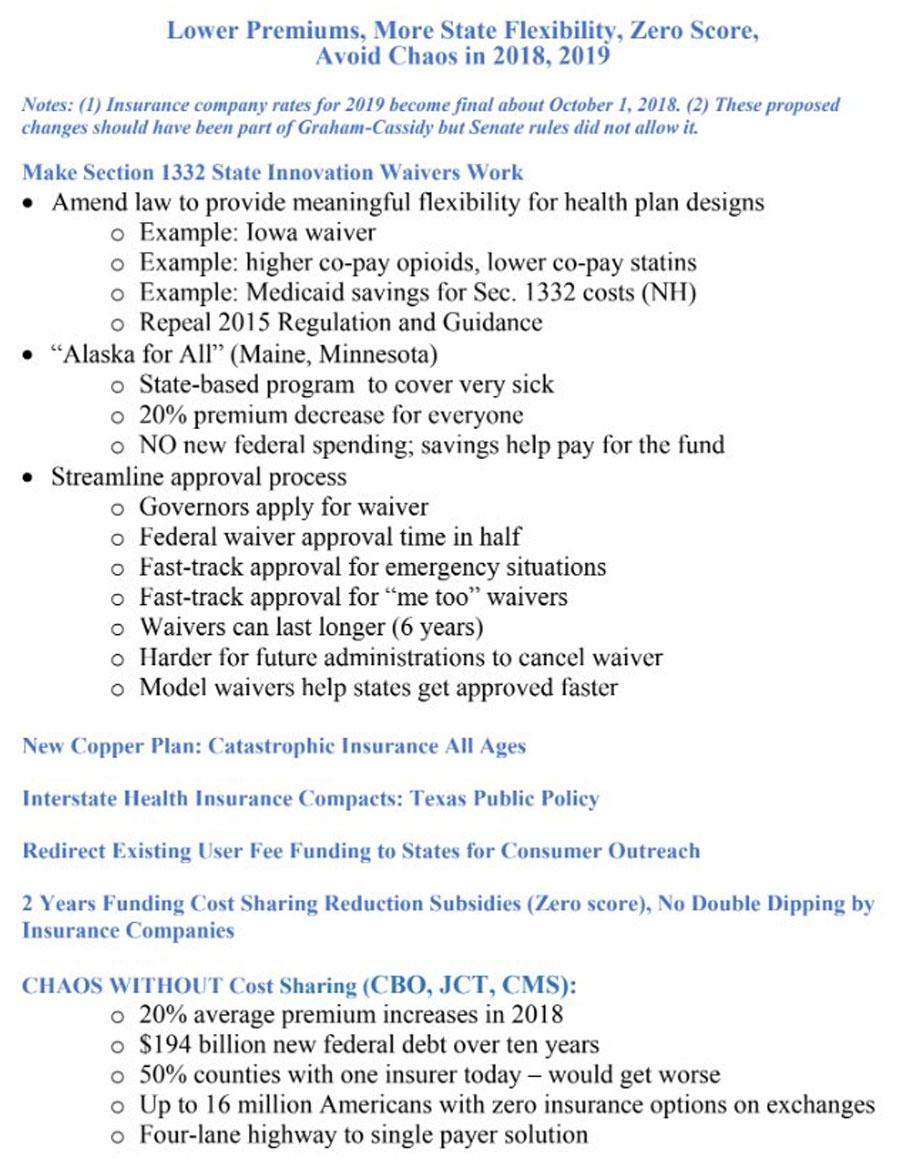 UPDATE: OK, the actual text of the bill is available now; it’s about 25 pages total.

I presume this is to prevent the Trump Admin from just sitting on the $105M in restored outreach/advertising money, or pissing it away on bullshit.

This is the item which I’m the most concerned about, but again, both Spiro and Slavitt seem pretty confident that the protection language prevents any of the states from screwing vulnerable people with the waivers.

This could cut either way. Most states have GOP governors...but most also have GOP legislatures. In a state like North Carolina, Pennsylvania or Virginia (hopefully for another 4 years—VOTE NORTHAM!), this could be very helpful. In a state like Maine or New Jersey (hopefully not for long—vote Murphy!), not so much.

This may seem obscure but it’s reasonable; changing a healthcare system state-wide can take several years before the impact on the budget becomes clear.

This is something which the Obama Admin simply never got around to actually doing...and with good reason: They’re kind of pointless and none of the insurance carriers are interested. However, the GOP has been obsessed with “selling across state lines” for years, and the ACA does allow for this provision, so fine; it’s a token gesture to get them to STFU about the issue.

OK, so I’m generally positive about this bill, so why am I not 100% supportive of it?

Well, for one thing, that “affordability waiver” provision still does make me a bit wary.

However, these are still clunky, confusing solutions, and only a dozen states are Switcharooing, while about 25 states are Silver Loading; the other dozen or so states are all over the place. Plus, some insurance carriers are so jumpy about it that they’ve already bailed (or will do so in 2019 if the CSR issue isn’t resolved), which helps no one. Finally, the “Switcharoo” gambit only works if the enrollees understand how to take advantage of it, which I don’t have a lot of confidence in given the general public’s confusion about all of this to begin with.