The CHIP funding reauthorization bill is also the most likely vehicle for some sort of bipartisan ACA stabilization measures, including...

Members of both parties have also discussed using the CHIP bill as a vehicle to extend payments to insurers under the Affordable Care Act, also known as Obamacare.

This sounds like the so-called "Problem Solvers Caucus" proposal which has been batted around for the past month or so, which includes 5

*(rolling my eyes at this one, since it's already allowed under the ACA and none of the carriers are interested anyway, but whatever)

The risk, lobbyists and state health officials say, is that such brinkmanship could endanger quick passage of a funding reauthorization for CHIP, especially if controversial items such as cuts to Medicaid or repeal of the health-insurer tax are attached.

...CHIP is authorized through 2019, but federal money for the state portion of the program isn’t. Congress last reauthorized that funding in 2015 for a two-year period that ends Sept. 30. In fiscal year 2017, federal CHIP allotments to the states came to roughly $16 billion.

States have some cushion if the federal funding is delayed, with unspent federal funds redistributed to states that have used up their allotment covering some of the shortfall.

Arizona, Minnesota, North Carolina and Washington, D.C., would run out of their federal CHIP funding by December, according the Medicaid and CHIP Payment and Access Commission, or MACPAC, a nonpartisan legislative agency that provides analysis and recommendations to Congress. An additional 27 states would exhaust their federal funds by March 2018.

Here's a state-by-state breakout of how many children are enrolled in the CHIP program (as well as children enrolled in Medicaid), taken directly from CMS: 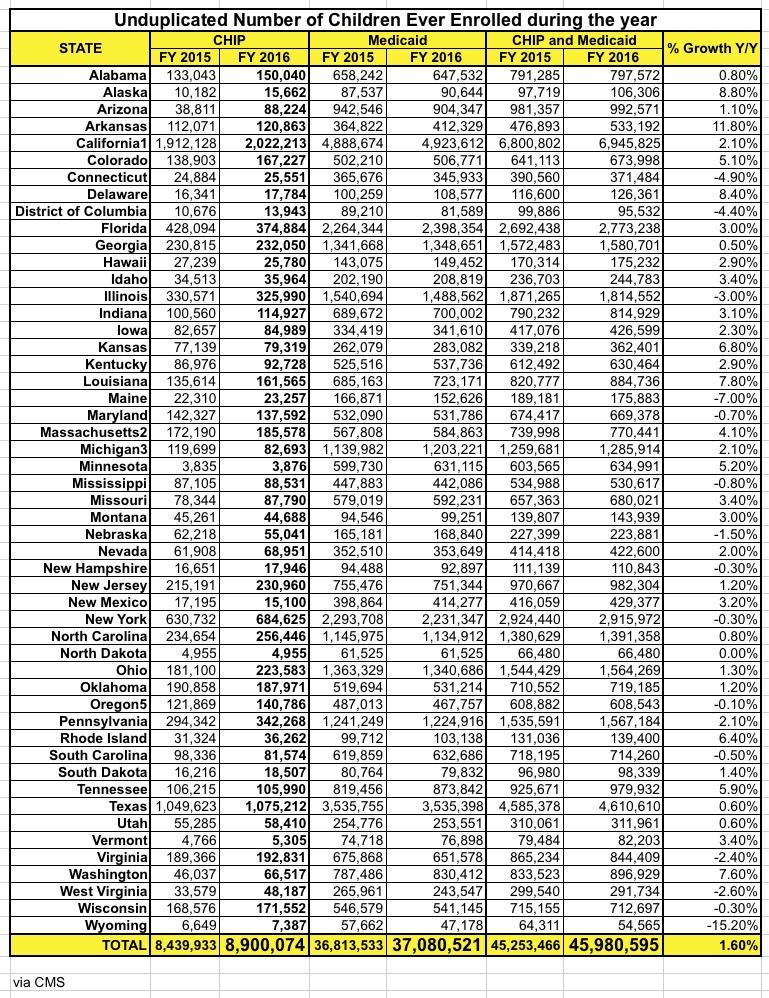