That leaves Medica and BCBSKS, both of whom filed plans to stay on the market...but only Medica appears to have actually submitted rate requests, for a mere 7,600 enrollees: 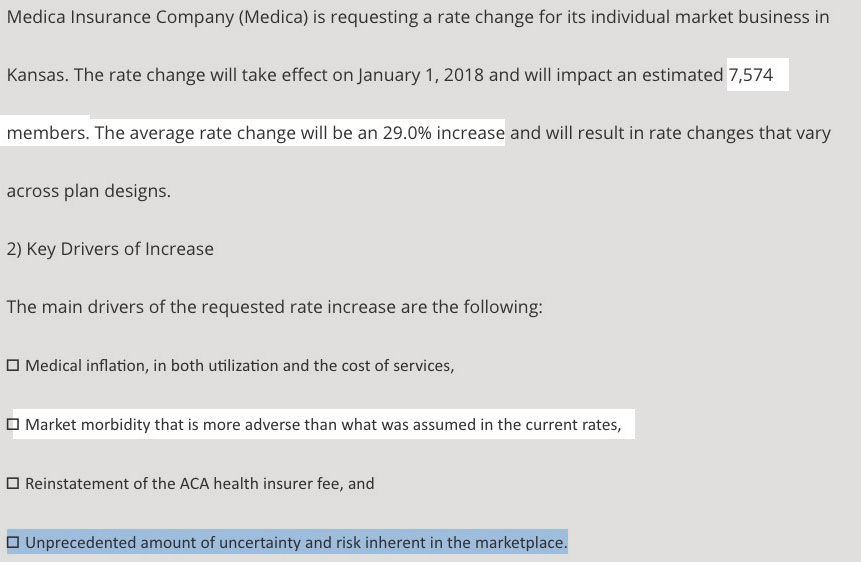 As for BCBSKS, I'm having trouble finding any filings for ACA-compliant policies for next year. Nothing shows up at RateReview.Healthcare.Gov, and while Louise Norris provided some SERFF filing numbers for me, those aren't showing up in the database either.

What I have found are a couple of rate increase filings for around 9,200 people still enrolled in grandfathered policies, but those are part of a separate risk pool so aren't really relevant to the ACA rates.

In any event, until I hunt down the "missing" (?) Blue Cross Blue Shield of Kansas Solutions filings, all I have to go with for KS is a 29.0% rate increase for Medica enrollees.

As for the "Trump Tax", the Medica filing is calls out both "market morbidity" and "unprecedented uncertainty/risk in the market" as being major contributors, and the PDF version specifically says that it "assumes defunding of the CSR program", so that 29% hike appears to refer to the full Trump Tax factor:

The Kaiser Family Foundation estimates that CSR non-payment will increase Silver rates by about 18% in Kansas next year; assuming that's spread across all metal levels, that drops to around 11.8% overall. Knocking that off the 29% gives around 17.2% assuming CSR payments are made:

Again, the 17.2% / 29.0% estimates only relate to Medica enrollees. If BCBSKS really is participating, their average increase could change these numbers significantly, but for the moment that's the best I can do. Stay tuned...

UPDATE: Hmmm...thanks to Louise Norris for this heads up:

TOPEKA (Aug. 31) — The Kansas Insurance Department has completed the review of rate filings for individual and small group health plans in Kansas for 2018.

The range of average rate revisions by insurance companies is from minus 8.8 percent to plus 29 percent. The proposed changes are for health plans sold on the federal marketplace and for plans not sold through the government website. The plans affect about 4 percent of the Kansas population who may purchase individual plans.

For 2018, 38 plans have been proposed for sale during open enrollment in Kansas on the federally facilitated online marketplace.

Currently, the federal healthcare.gov website only displays plans with a rate revision for 2018. Blue Cross and Blue Shield of Kansas, Medica and Sunflower State Health Plan will offer new plans in 2018, but these plans may not display as rate revisions on healthcare.gov.

...All rate filings are subject to analysis by the insurance department’s Health and Life Division. The division reviews the insurance companies’ actuarial data and assumptions.  All rates are required to be final by Sept. 6, 2017.

Hmmmm...ok, so Centene is jumping into Kansas (under the brand "Sunflower State"???), but they're new, so there's technically no 'increase' involved there.

This does confirm that Blue Cross Blue Shield of Kansas is on the exchange next year...so the question is what their rate increases actually are (and how many enrollees they have).

Medica clearly covers the 29% high end, which means BCBSKS must include the -8.8% rate drop...but that doesn't tell me their average. Frustrating. Stay tuned...