Utah has also finally released their requested 2018 individual market rate increases. There are six carriers offering individual policies next year, but only 2 of them are participating on the ACA exchange (and the 4 off-exchange carriers hold less than 4% of the total market combined). In fact, two of the off-exchange-only carriers are barely participating at all: BridgeSpan has only 8 enrollees, while "National Foundation" (a "phantom carrier" which also goes by "Freedom Life" in other states) once again supposedly only has a single "enrollee". Molina has a few hundred off-exchange enrollees, but the bulk of their 70,000-person membership are in exchange-based policies, and they're dropping off the exchange next year, so those 70K will have to choose from one of the two remaining exchange carriers: SelectHealth and the University of Utah.

These are also the only two carriers which are impacted by the Cost Sharing Reduction issue, but it makes a pretty significant difference: Both SelectHealth and University of Utah specifically list CSR reimbursements as the primary reason for their rate hikes. They didn't give hard numbers, but according to the Kaiser Family Foundation, 15 points of the Silver rate hikes are due to CSRs; spread out across all metal levels, that translates into roughly 10.9%.

With that in mind, here's what the unsubsidized Utah individual market should look like next year: 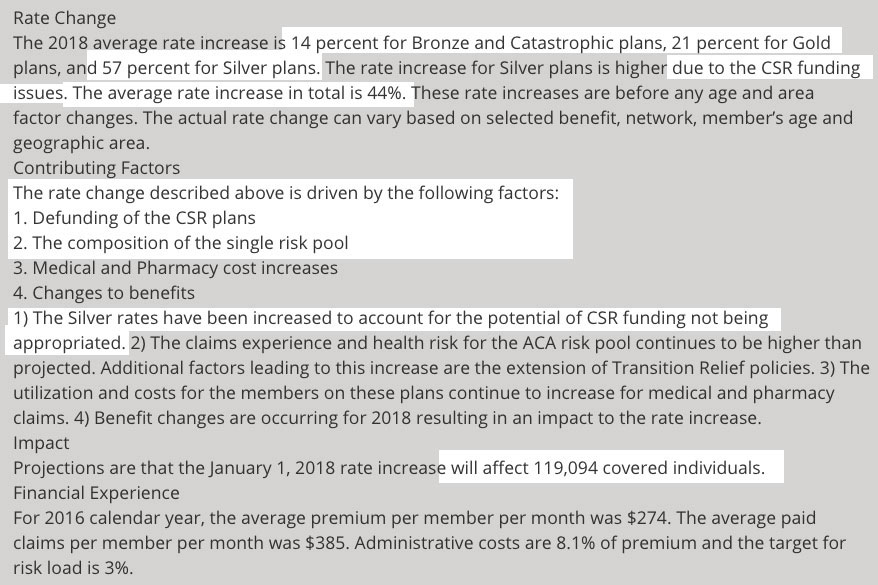